Formula E’s action continues to impress this season. In six races, we’ve had six different winners, leaving an incredibly close race for both the drivers’ and teams’ championship. This Saturday, the series returns to Rome after last year’s inaugural Rome ePrix, seeking to continue to produce exceptionally exciting races.

Before we talk about last race’s results, here’s the full race on Formula E’s YouTube page. Have a watch if you’d like. You can also visit the bottom of this post for a shorter video of last race’s highlights.

Like every other race this season, the inaugural Sanya ePrix didn’t fail to impress. While the race started a bit slow, it heated up near the end.

The race started off with trouble for Felipe Nasr, whose car was left behind at the starting line triggering a full course yellow flag. He eventually got his car moving, but retired the car straight away. Nasr has had a hard entry into Formula E from Formula 1, where he has repeatedly suffered misfortune — and he’s not driving very well when his car is working, either.

The first half of the race was largely uneventful, with polesitter Oliver Rowland controlling the pace from the front. About halfway through the race, reigning Formula E champion Jean Eric Vergne managed to get past Rowland with a late lunge up the inside into turn 11. Immediately after this, Vergne started gaining significant ground over Rowland, indicating that he had had more speed all along but Rowland had been holding him back with good defending.

This triggered a big fight for second place, with several cars bunching up behind Rowland who was now focusing more on defending hard than trying to catch back up with Vergne. A bit of a “Trulli train” (named for former F1 driver Jarno Trulli, who used to qualify well and defend hard during races, forming a line of cars close behind him unable to pass) formed behind Rowland who was now holding up about six cars.

Rowland defended hard, but perhaps a little too hard.   Right after Vergne passed him Antonio Felix da Costa tried to take the opportunity for a pass, but Rowland shut the door unceremoniously and clattered da Costa’s car into the curb, damaging his nosecone.  The incident didn’t result in a penalty, but probably should have.

With the lead Vergne had built up on Rowland, he went to activate attack mode and nearly lost first place because of it.  He barely managed to hold on, and seemed set to build a significant advantage on the cars behind him and win handily.

But the cars bunched up behind Rowland had their own problems as well.  With that many cars close to each other, there was a lot of jockeying for position.  While Alexander Sims was running 5th, Andre Lotterer tried to pass him on the inside and they ran wheel-to-wheel through the turn, and on corner exit Sims terminally damaged his right rear suspension.  This did not lead to a penalty for Lotterer (it was a close call, but given Lotterer’s aggressive driving history, I may have erred on the side of penalizing him for it), but did lead to a short red flag to recover Sims’ car from the track.

With the red flag, Vergne lost the benefit of attack mode and had to spend the last few laps under investigation for not respecting safety car/red flag procedures.  Rowland was intent to pass him on track though, and not rely on a penalty to get himself a win.

The battle near the front continued until the penultimate lap where Sebastian Buemi, who had already had trouble over the weekend with a brake infringement in qualifying which caused him to start the race from the pit lane, crashed into the back of Robin Frijns which in turn caused him to hit Lucas Di Grassi.  All three drivers were running in the top 10 at the time, but both Frijns and Di Grassi were taken out of the race by the incident, which caused the race to end under full course yellow.  Former Formula E champion Buemi ended up in sixth place but was penalized after the race for causing a collision, dropping him to 8th.

The podium ended up being the same as it was before the red flag, with Vergne finishing first with Rowland and da Costa behind. Despite all the action in the back, the podium changed very little over the course of the race, with the top 3 qualifiers finishing top 3 in the race.

That said, the race may have offered a little too much action. While it’s fun to “let the cars race,” and this Formula E season has been incredibly exciting, there’s the risk that if crashes are allowed to go unchecked that the series will turn a little too much into bumper cars for everyone’s taste. Buemi was rightfully penalized, but there were several other crashes which went without official sanction and this does seem to be a pattern in Formula E. They don’t need to penalize every little contact, but let’s try to instill a little bit more respect into these drivers going forward.

As is common in Formula E, the Rome track itself is…a little bit dull. The layout has some potential with a couple long straight-ish sections ending in a 90-degree turn, which is usually a good place for passing opportunities. But the environs of the “EUR” residential and business district of Rome are rather boring, with a lot large, imposing, blocky edifices arranged around the track. The area was originally built pre-WWII as a celebration of fascism…and it looks the part.

This is a big contrast with the beautiful historical sights all around Rome. When the series first announced that they would race in Rome, they did a big press shoot in front of the Colosseum: 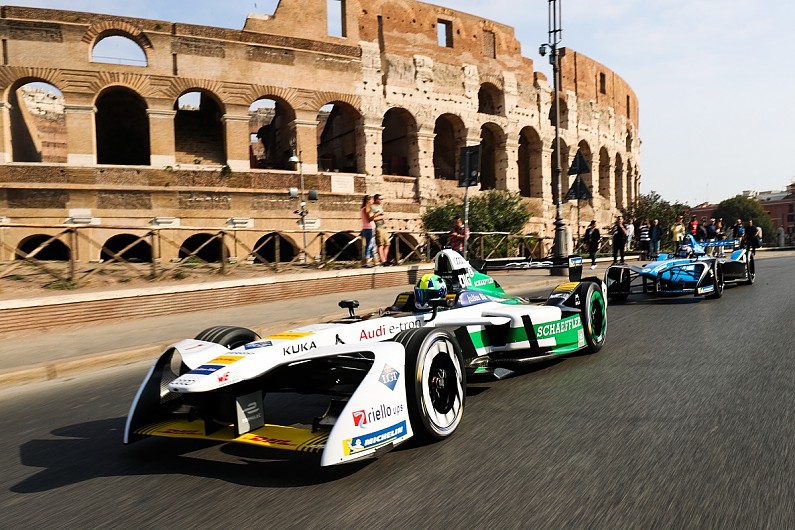 Last year, Roborace, a planned autonomous support race series for Formula E, conducted a “man vs. machine” test around the Rome track. You can get a sense for the track by watching that video.

It would have been great to get an opportunity to race around some of Rome’s historic or artistic treasures, but alas, we got a business park.  At least there’s a little greenery along the circuit.

So it’s a bit of a departure from Formula E’s typical theme of putting races beside harbors or in municipal parks, but the cars and drivers and rules are all the same so we should still get some exciting racing.

Particularly, the drivers’ championship is still very close.  With 6 different winners in 6 races and the championship leader crashing out in each of the last two races, da Costa is leading the championship by just one point. Former leader d’Ambrosio is just behind him, and Vergne, Bird, di Grassi and Mortara are all within ten points of the lead.

In terms of teams, DS Techeetah, which had been having trouble for the last three races with just one points finish out of six opportunities, finally turned it around last race and placed well.  With a 26-point win for Verge and 12 points for Lotterer, they will be looking to keep the pace. Even with their streak of misfortune, they’re still only two points behind the championship leader.

Speaking of which — the teams’ championship is as close as can be.  Currently Virgin is in the lead, but only on tiebreakers since they are tied in the points with Mahindra (and Virgin has one more 3rd-place finish than Mahindra does). Behind them is Audi, trailing by just one point, and the aforementioned Techeetah trailing by two, leaving four teams within a 2 point battle for the lead. There’s a bit of a gap down to BMW and Venturi, though don’t count either team out of the race yet.

Not only have there been 6 different winners in the first 6 races, but each race so far has been won by a different team. The level of parity in this sport is remarkable, given that motorsport so often suffers from single-team dominance where race results are easy enough to guess ahead of time. Truly, in Formula E, you never know what to expect. Rome is the midpoint of the season, so we’ve still got plenty of battling and surprises to come.

So the answer of what to expect for the next race is: anything could happen. To find out, you’ll just have to tune in on Saturday.

The Rome ePrix is on Saturday April 13th. The race starts at 7am PDT/10am EDT, 2pm UTC, 4pm local Rome time. Head to Formula E’s website to learn how to watch the race in your country.