Formula E returns to China this Saturday for the Sanya ePrix

We’re back to China again after just two weeks, for a race on a brand-new track along the seaside in the resort city of Sanya, on the southernmost tip of the country.

Quick note: the last race was on Sunday, and this race is on Saturday, so plan on tuning in 24 hours earlier than you did last time. Compounding this situation, due to the change to Daylight Saving Time in the US, the start time of this race is an hour earlier than the last one for US Eastern and Central time zones. Check the official race website for a countdown or the bottom of this post for race start times.

Before we talk about last race’s results, here’s the full race on Formula E’s YouTube page. Have a watch if you’d like. You can also visit the bottom of this post for a shorter video of last race’s highlights.

Hong Kong was an important milestone for Formula E, as it was the series’ 50th race. While this number is somewhat meaningless, what it represents is the success of a race series which many thought would never get off the ground. Former F1 boss Bernie Ecclestone reportedly told Formula E chief Alejandro Agag that he would “never make your first race,” so 50 is quite a lot of races for a series which some thought was doomed to fail. Bernie, for his part, is happy he was wrong (and even thinks F1 should go electric themselves).

As for the action in Hong Kong, we were treated to a rainy qualifying session. Between the torquey electric motors and low downforce on Formula E cars, drivers were spinning up the rear wheels all the way down some of the straights.

Wet qualifying sessions tend to shake things up, leading to drivers starting the race in unexpected positions, and unexpected positions make for exciting races. The teammates from Mahindra, who entered the race in first place in the teams’ championship, qualified in last and second last place, which was sure to cause some dramatic moments in the race. And HWA Racelab, a team which had scored zero points going into the race, had two drivers in the super-pole shootout, scoring pole position with ex-F1 driver Stoffel Vandoorne.

The prospect of a possible wet race was quite exciting, as it would have been the first wet race in Formula E’s history. Given that the series has raced on treaded street tires since its inception, without having pit stops for tire changes, this would have been a good time for them to show why they’ve been on treaded tires instead of slicks all along.  And a wet race often leads to unexpected outcomes as well.

Alas, the track mostly dried up before the race started.  But this didn’t stop us from having yet another good race.

Right off the bat, there were 42 position changes in the first lap of the race — that’s more than some F1 races will have over the course of an entire race.

But during those position changes, Felipe Nasr damaged his car when he crashed into the back of his teammate Jose Maria Lopez at Hong Kong’s horribly-designed first turn, a hairpin which seems to always cause first-lap incidents. Over the next lap his car was clearly broken, putting up a large smokescreen behind it. Even though it was apparent he wouldn’t be able to finish the race with this damage, his team did not call him in. A lap later he crashed into the wall in an awkward position at the exit of turn 2. Just behind him were the Mahindra drivers, Pascal Wehrlein and Jerome D’Ambrosio, still near the back after a poor qualifying, and as they came around the corner they both crashed into Nasr’s car, causing the race to be red flagged while the marshals cleaned up three broken cars. After the race, former championship leader D’Ambrosio was furious at the Geox team for not calling their broken car into the pits and ruining the race of two other drivers.

After the red flag restart, almost everyone activated attack mode. Sam Bird passed Oliver Rowland for the lead as the former accidentally activated the car’s Full Course Yellow speed limiter button, then Bird went wide and Andre Lotterer took the lead. The race then settled into a long battle for the lead between Bird and Lotterer.

During this battle there were two more safety cars deployed, to pick up after breakdowns of pole starter Vandoorne and former race leader Rowland.

The battle was close all along, with Lotterer defending hard (perhaps a little too hard) and Bird attacking hard (perhaps a little too hard as well). On the penultimate lap, Bird hit the back of Lotterer’s car while attempting a pass, leaving Lotterer with a punctured tire and Bird leading the race. Bird crossed the finish line first, but was later penalized for the contact and ended up in 6th place, promoting Eduardo Mortara to the win, with Lucas Di Grassi and Robin Frijns filling out the podium.

This ended up being another race of attrition, where 8 cars would eventually be unable to finish, including pole starter Vandoorne. He still has yet to score a race point in Formula E, despite high expectations and fan support.

The Sanya street circuit is new this year, so in terms of track, we don’t really know how things will turn out.

All we’ve got so far is a circuit diagram, though this can give us a few clues: 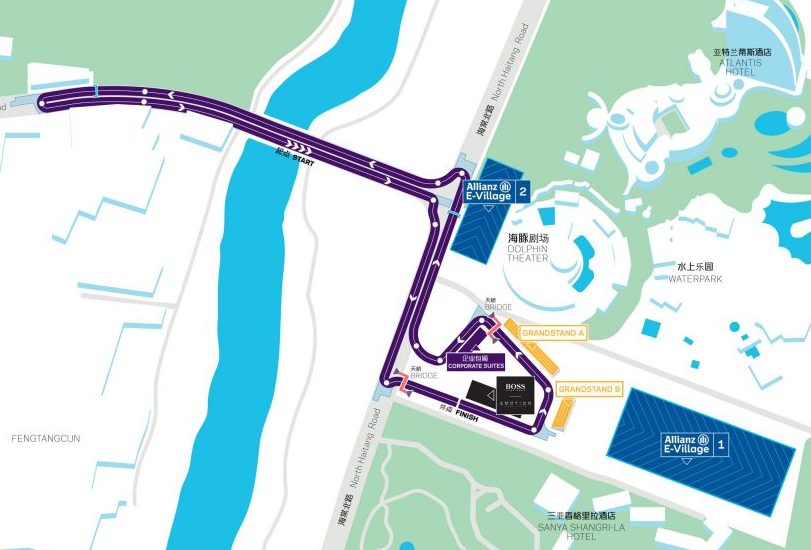 Hmm, actually, I’m not sure if that’s the right graphic. Because the New York circuit diagram looks like… 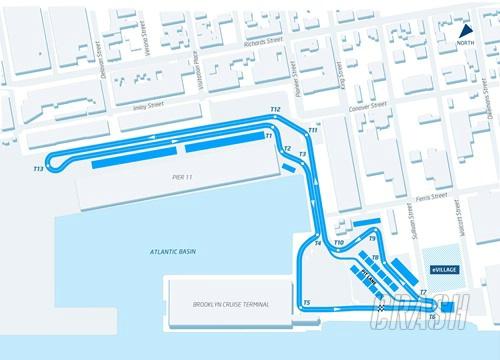 …almost the exact same thing. Well then. I guess Formula E has a “type.” But…this one goes over a bridge! So that’s kind of cool.

Unfortunately New York hasn’t been the most exciting track, though holding the event at the end of the season has resulted in some excitement in terms of championship-deciding races.

With Sanya in the middle of the season, the race won’t benefit from that inherent championship-deciding excitement, but given that this season has had nothing but eventful races, we can hope that a fairly bland track will still result in some interesting battles. Formula E has a tendency to put on a good show even if the odds are against it, so I’m still looking forward to it.

And we do have an exciting championship shaping up regardless. With just 2 championship points separating the top 4 drivers, and with several others close behind with a good shot of catching up (Wehrlein, if he can buck his luck, is still a top contender in my opinion), it’s still anyone’s game.

Mahindra will be looking to bounce back from the tragedy of last race and reclaim their top position in the standings, Audi and Virgin will seek to keep plugging along and put in solid points finishes, Venturi will try to continue their recent point-scoring streak, and BMW will continue to try to find the speed they’ve shown flashes of over the course of the season. DS Techeetah has been having a rough time of it lately, with a lot of poor finishes, but don’t count them out if they can recover from their current backslide. All the other teams have a long way to go, though, if they want to have a shot.

The Sanya ePrix is on Saturday March 23rd. The race starts at 12am PDT/3am EDT, 7am UTC, 3pm local Sanya time. Head to Formula E’s website to learn how to watch the race in your country.