Tesla is expected to soon introduce its new Autopilot Hardware 3, which consists of a new neural net computer that they claimed will be the ‘world’s most advanced computer for autonomous driving’. It will become standard on all its vehicles and be offered as a retrofit.

Now Electrek has learned of a leak of the computer’s diagram as a new standard part in Model 3.

Back in 2016, we first exclusively reported on Tesla quietly hiring legendary chip architect Jim Keller from AMD and we were fairly excited by the implications of Tesla hiring such an important chip architect.

At the time, we speculated that Tesla could be looking into making its own silicon at some point – speculation that was further reinforced after Keller’s hiring was followed by a team of chip architects and executives from AMD also joining Tesla.

Finally, our suspicions were confirmed two years later when Elon Musk confirmed that Tesla is working on its own AI chip to install in an onboard computer powerful enough to enable Tesla’s promised full self-driving capability.

Keller has since left Tesla, but the team is now led by Pete Bannon, who was amongst the other chip architects hired by Tesla over 2 years ago.

Last year, Bannon said that they were ramping up their manufacturing effort and aiming to start production around the end of the first quarter of 2019.

A source told Electrek that Tesla updated the Model 3 wiring diagrams in its internal service documentation on January 9 to include the new Autopilot 3.0 computer as the new standard ECU in Model 3: 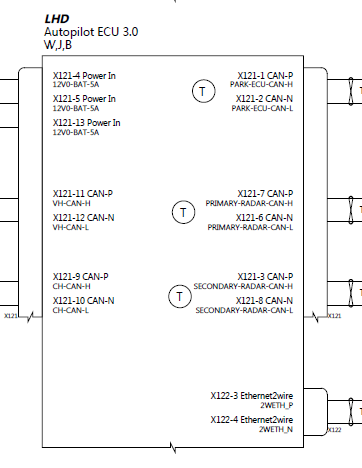 We contacted Tesla about the new diagram for Model 3 to ask if it means that the Autopilot 3.0 computer is now being installed in new Model 3 vehicles.

The company denied that it’s currently in production and reiterated Bannon’s timeline – though it couldn’t explain why they released the diagram for Model 3.

As the diagram shows, Tesla’s new Autopilot computer appears to be able to connect to a second radar.

Code that leaked earlier this month showed that the Autopilot hardware 3.0 computer is equipped with a Tesla PCI-Ex device named “TRIP”, which appears to work as a neural net accelerator.

In a recent Tesla conference call, the automaker’s Director of AI and Autopilot Vision, Andrej Karpathy, said that the team was excited about what they could do with the new hardware.

Tesla says that it will be required to enable the features promised under its Full Self-Driving Capability Package.

Every owner who ordered the Full Self-Driving Capability Package, which has been available (to order) since October 2016, will receive the upgrade.

A few months ago, Tesla removed its ‘Full Self-Driving Capability’ package from its options due to ‘confusion’, but owners can still order it after delivery through their Tesla account.

Now Tesla needs to produce the computer for all new vehicles and it is expected to also unveil a plan to start retrofitting existing vehicles.

I think that the launch of the new computer is imminent and it will be an important step.

As I have been saying for the past few years, computing power inside vehicles is becoming an important differentiating factor and it now looks like Tesla’s vehicles are going to more power than any other car in production today.

But keep in mind that this update is more about future-proofing the vehicles than anything.

The actual software could still be years away – though CEO Elon Musk has been guiding a release by the end of the year.

As we recently reported, Tesla warned ‘self-driving package’ buyers that the actual activation could be ‘very far away’ due to regulations.

There are a lot of different potential bottlenecks, but now it looks like the hardware might not be one for long.

Though Tesla needs to ramp up the device to all vehicle programs and start the retrofits, which is easier said than done.