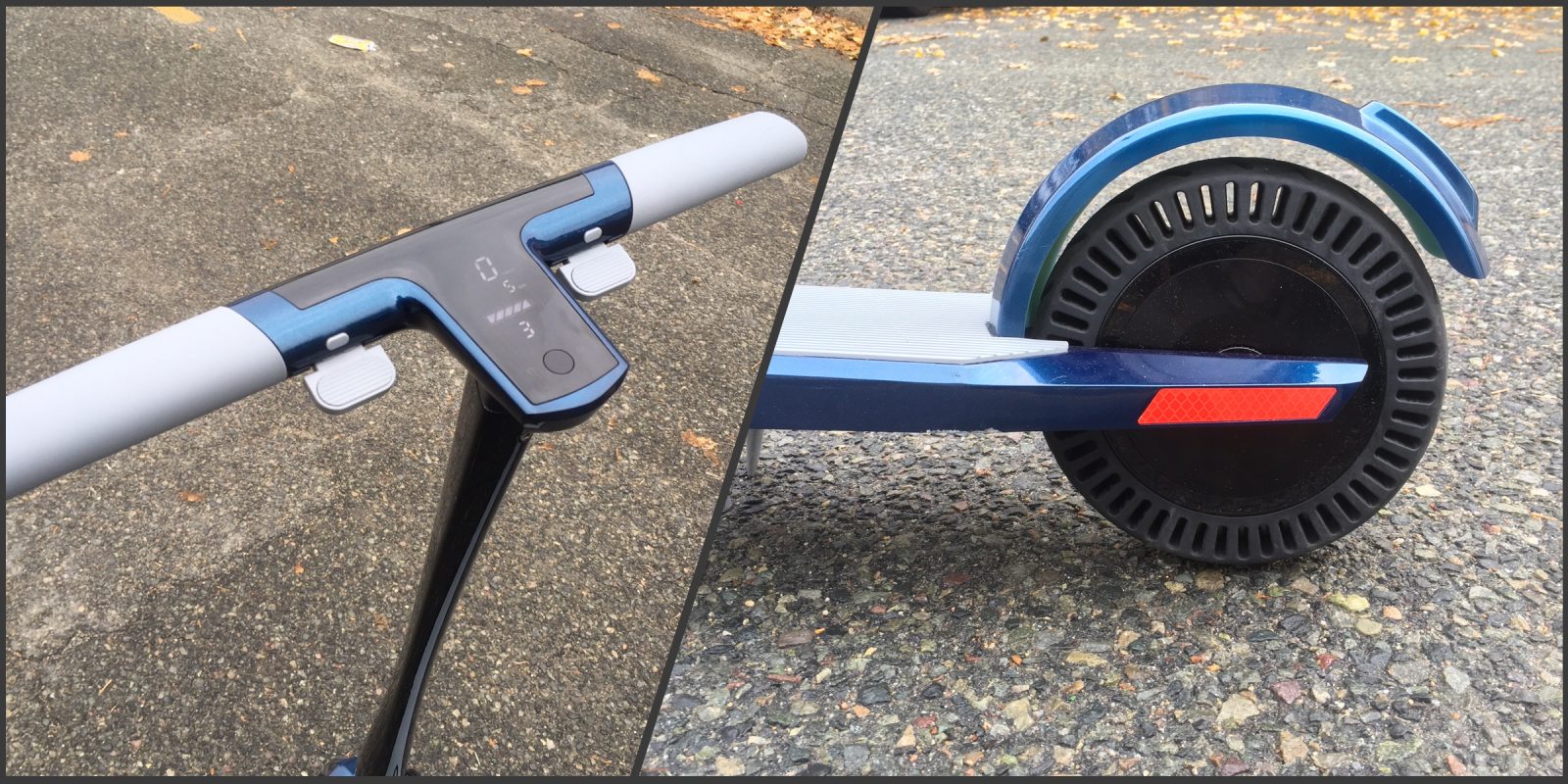 One of the advantages of electric scooter shares such as Lime and Bird, besides their convenience, is that they introduced the world to how much fun electric scooters can be. But as riders grow frustrated searching for available scooters, sales of consumer electric scooters have skyrocketed, prompting more companies to enter the fold.

The Unagi electric scooter, first introduced to the world as the Swan, is available as either a single (E250) or dual motor (E450) scooter.

Keep in mind that those are continuous power ratings. In actuality, the dual motor model reaches up to 900W peak – which is the power you feel when you peg the throttle. And this scooter has some serious get-up-and-go. 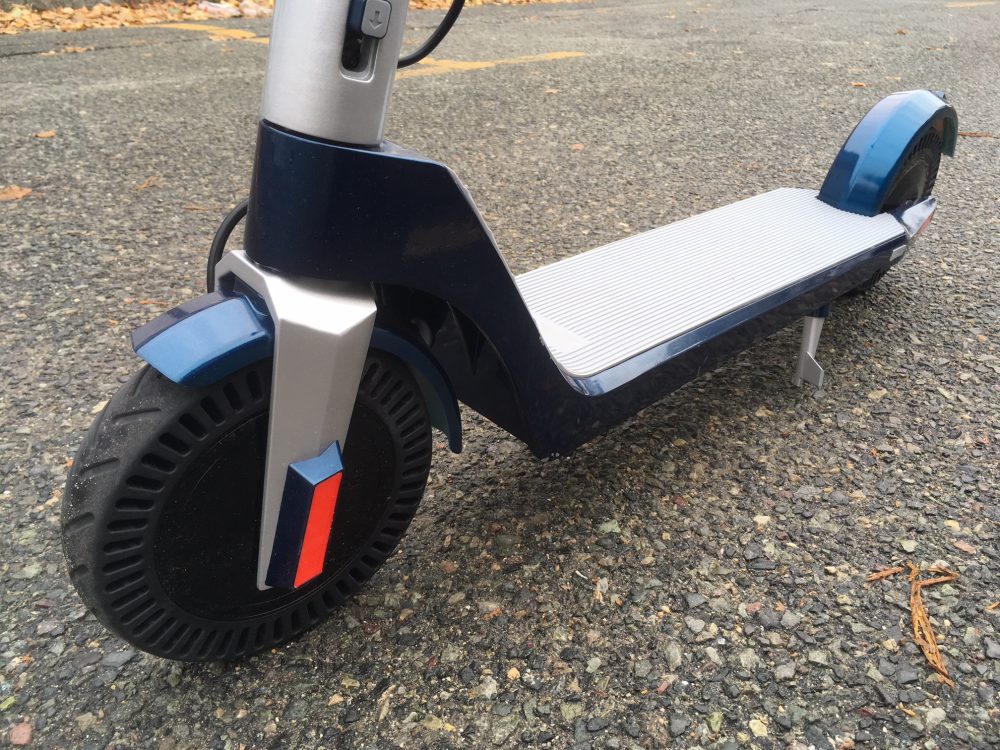 For those that want to learn to ride under tamer conditions, the Unagi electric scooter features three speed modes. The slowest limits the scooter to about 9 mph (14.5 km/h). The fastest speed level reaches 15.5 mph or 25 km/h.

Electrek received a pre-release E450 scooter, and I’ve been riding it for the past couple weeks to put it through its paces.

You can check out my video review of the Unagi E450 scooter below, and read on to learn more about the scooter.

Regenerative braking is used to bring the scooter to a stop. I tested the dual motor scooter, and the regen braking was quite strong. I suspect the single motor regen might not be as strong as with two motors, but I haven’t tested a single motor version to be sure.

The Unagi electric scooter is super lightweight compared to its competitors, tipping the scales at just 24.25 lbs (11 kg) for the dual motor scooter. The single motor version is even lighter at 22.5 lbs (10.2 kg).

LED lights are built into the handlebars and rear fender. Pressing the brake lever causes the tail light to flash, functioning as a brake light.

The handlebars are nicely rounded and fit comfortably in the hand. The stem tapers down as it blends into the deck. Even the folding mechanism, which is notoriously unattractive on most scooters, takes the form of a minimalist button. 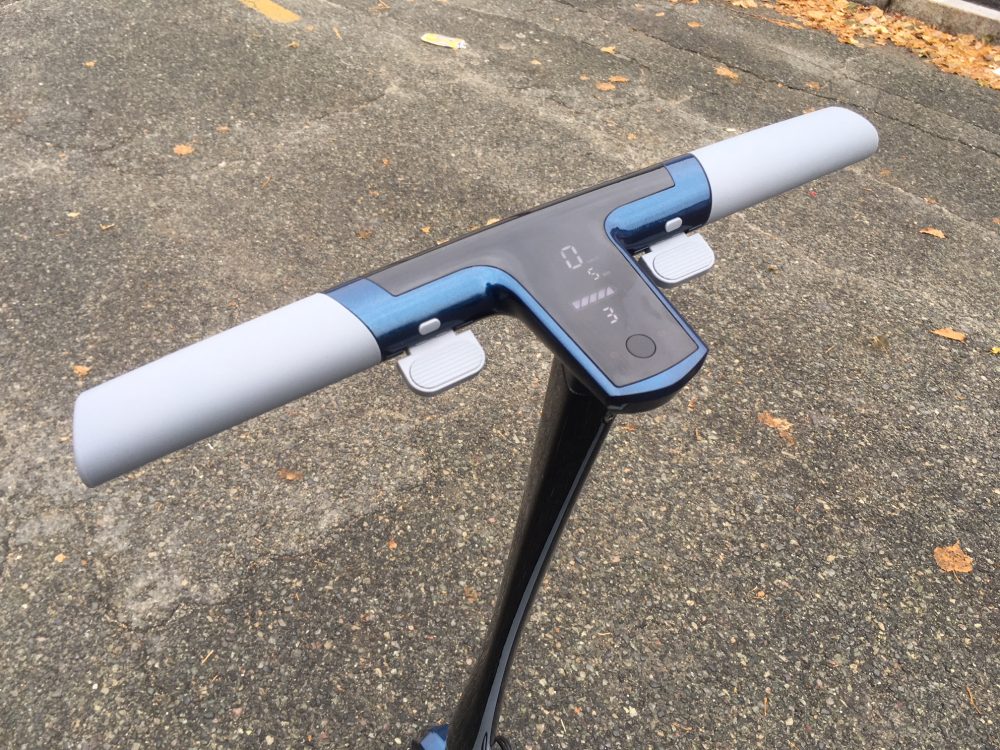 The handlebars are magnesium, and incorporate not only the throttle and brake levers, but also hidden buttons for a horn and mode or power level selectors.

“The magnesium alloy handlebar is a feat of structural engineering that required more than thirty prototypes to perfect. Integrated in the top bar are the intuitive controls of the dashboard—throttle, brake, horn, and LED headlight. No visible wires. No bulky console. Just a sleek, integrated command center that connects the rider to the ride. Why Magnesium? It’s 33% lighter than aluminum, which partially explains why the Unagi is the most portable scooter on the market.the stem is Japanese carbon fiber and the deck is machined aluminum with inlayed silicone. All of these help achieve significant weight savings.”

Even smaller parts like the kickstand are thoughtfully designed.

When stowed, the kickstand is nearly invisible. Only a small piece protrudes to give you enough purchase to engage it, with the remainder of the kickstand nicely hidden.

The folding mechanism is also the nicest and easiest to use of any electric scooter I’ve tested. Instead of wrestling with a lever or locking bar, you simply depress a button on the side of the stem. The scooter folds right away, and doesn’t even require a frustrating locking hook like on some other electric scooters. 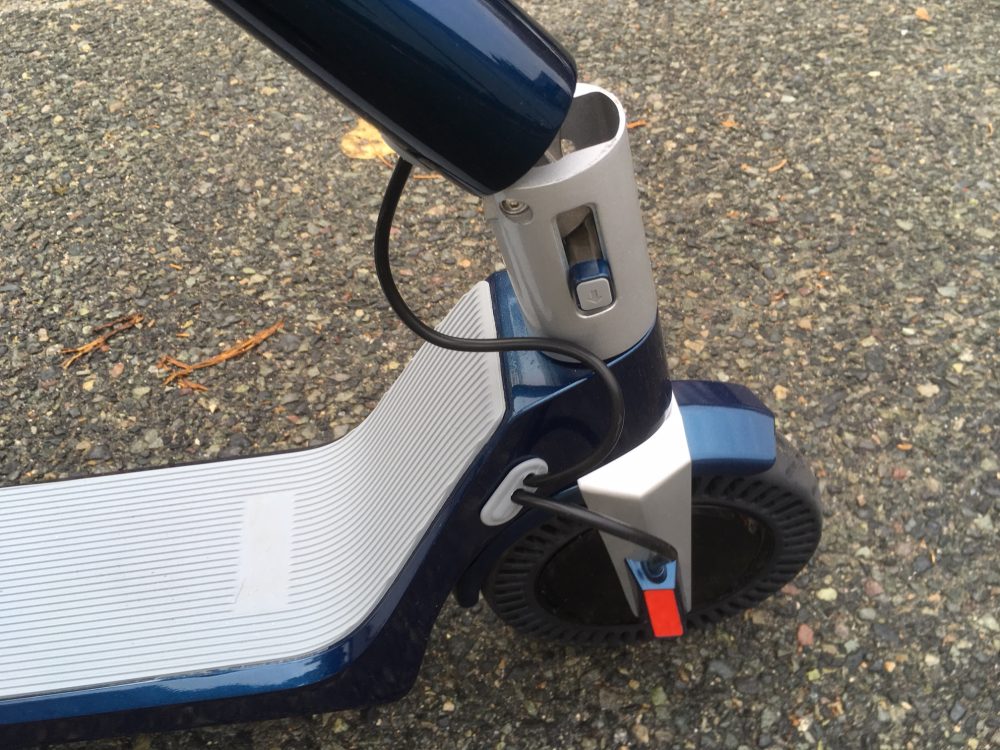 The dual-motor scooter has plenty of acceleration. The speed of 15.5 mph isn’t the fastest I’ve tried, but it’s plenty for everyday commuting and joy riding. Much faster and you’d be in a different class of vehicle.

The Unagi electric scooter doesn’t have suspension, but it mostly makes up for it with hollow-void airless tires. These tires don’t require pumping up with air, so you’ll never get a flat. But they also aren’t rigid like solid rubber tires found on other airless tire scooters. The hollow voids deform when you hit a bump, which helps to absorb some road shock. It doesn’t work as well as true suspension, but true suspension would significantly increase the price of these affordable scooters. The shock absorbing wheels are a good compromise between cost and comfort. 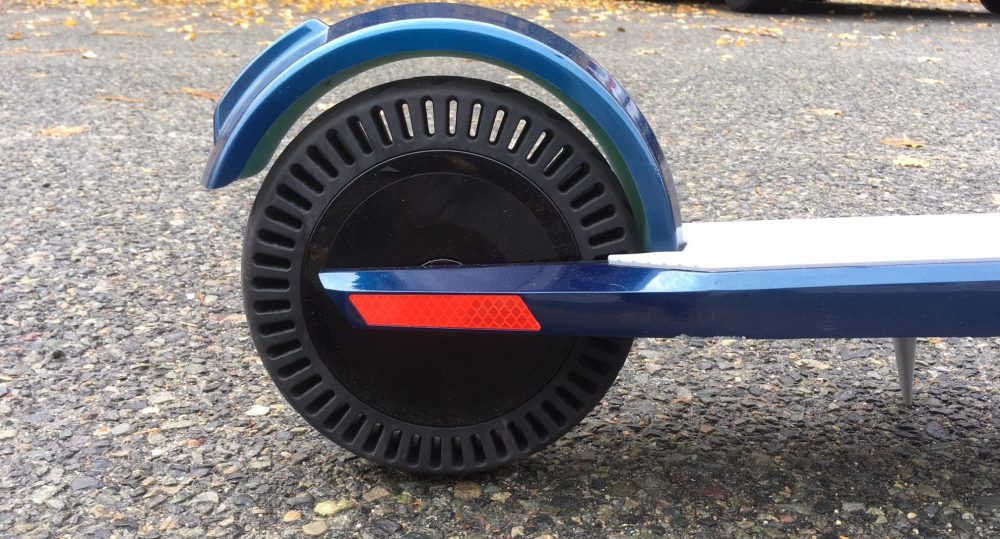 The scooter also had great traction in the wet environment I rode it in. Here in New England, everything is covered in a layer of damp, slippery leaves. But the Unagi electric scooter performed just fine, even when leaning into the turns.

In fact, the scooter is technically waterproof, meaning you could ride it in the rain if you wanted to. Though that doesn’t sound like much fun, so I didn’t test that out myself.

The handlebars are really comfortable, and fit nicely in my hands. The grips aren’t harsh rubber like most electric scooters. I’m not sure if they’re made of the same silicone used in the deck, but they feel like it. Whatever they’re made of, it’s working for them.

Like nearly all new personal electric vehicle companies these days, Unagi is taking orders for their new electric scooters via Kickstarter. The E250 retails for $890, but it is available for pre-order for 30% off at just $623. The dual motor E450 retails for $1,090, but is also available for early pre-order at a 30% discount for $763. Both include a free helmet.

Compared to popular electric scooters like the Xiaomi M365 and Segway ES2, the Unagi scooters are priced equivalently but look and feel much nicer. And considering that the Unagi scooters use much higher cost carbon fiber and magnesium than the standard sandblasted and sprayed aluminum scooters on the market, those early-bird prices are a steal.

Unagi plans to begin fulfilling orders in January 2019, and expects to have all scooters shipped by March. Just in time for the return of nice scooter weather.

While Kickstarter and Indiegogo projects always come with the standard caveat that you are backing a project and not directly buying a product, at least in this case we can confirm that the product exists and works well. As we have discussed previously, while crowdfunding campaigns were often used in the past to raise capital to fund an idea, nowadays they are more often used to leverage the marketing and reach of crowdfunding platforms to connect with a wider audience.

In the end, I’m very impressed with the Unagi electric scooter. After the Kickstarter is over, the base model will cost $890, but for an extra $200 you can double the power with a second motor. That’s pricier than some other electric scooters I’ve ridden, but none of them compared to the Unagi in terms of build quality or appearance. And all the more reason to grab the early-bird pre-orders and take advantage of the sale.

The performance is as good as the higher end scooters I’ve ridden, and much better than the cheaper scooters I’ve used. Considering that almost all electric scooters top out at around 15 mph and have similar ranges of around 15 miles, it’s hard to compare them on much more than acceleration, comfort and style. But the Unagi would win in all three categories, and would definitely blow away any Lime or Bird scooter in a drag race.

Plus, I love the beautiful screen, which looks like a glass smartphone display. Sure, a cheap LCD will display your speed and battery, but it just looks so much nicer on the Unagi’s slick LED panel. 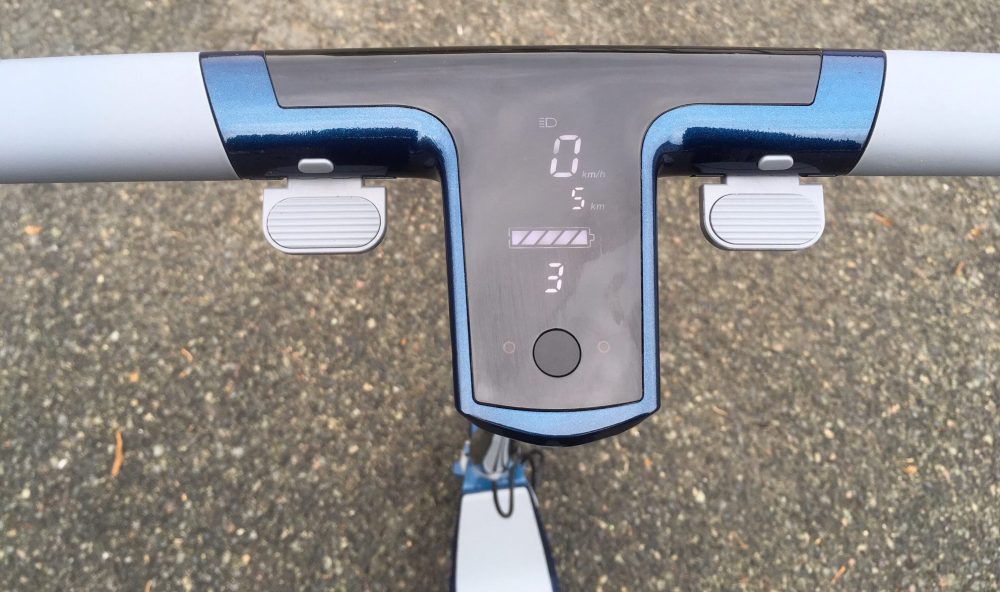 What do you think about the Unagi electric scooter? Let us know in the comments below.

Update: There’s been some confusion about the original Swan scooter we covered this summer and the Unagi covered here. David Hyman, Founder of Unagi, has provided some clarification to Electrek:

“The designers [of the Swan] who call themselves QMY and Unagi are now one team. They are/were 3 young brilliant industrial designers who built a scooter and I was so blown away by it compared to every other scooter (I’ve been to every scooter factory in China multiple times), that after months of discussion, negotiation, and investment, we formed Unagi which is essentially one entity with those 3 guys on our team.  Unagi is the only scooter that one can ever get exclusively & globally designed by these 3 guys in conjunction with efforts and input from the rest of our team. We spent 6 months massively improving on the legacy design. New motors, new braking mechanism, new lighting, new display and most importantly, improved folding hinge, and rebuilt from the ground up controller from the drone world that’s bullet-proof. The “Swan” (as it was called) was essentially a beta and never went into mass production, and the Unagi is the 1.0. Going forward it’s all Unagi”