Electric stand-on scooters have been in the news a lot lately, largely due to their growing popularity in electric scooter rental programs. These scooter shares have been spreading around the US and the world, introducing commuters to the convenience of these small yet functional EVs.

Qingmai Company, a technology company based in China, has unveiled their new electric scooter known as the SWAN.

The SWAN was designed with young, eco-conscious commuters in mind. In an attempt to part ways with the nerdy image often associated with most scooters, the SWAN’s designers incorporated flowing lines and innovative materials into the electric scooter.

The carbon fiber steering stem of the scooter was built to resemble that of its namesake, a swan.

“The steering stem of the SWAN scooter is made of T700 carbon fiber which is made by Toray Resin Company of Japan, which is the biggest carbon fiber producer in the world.” 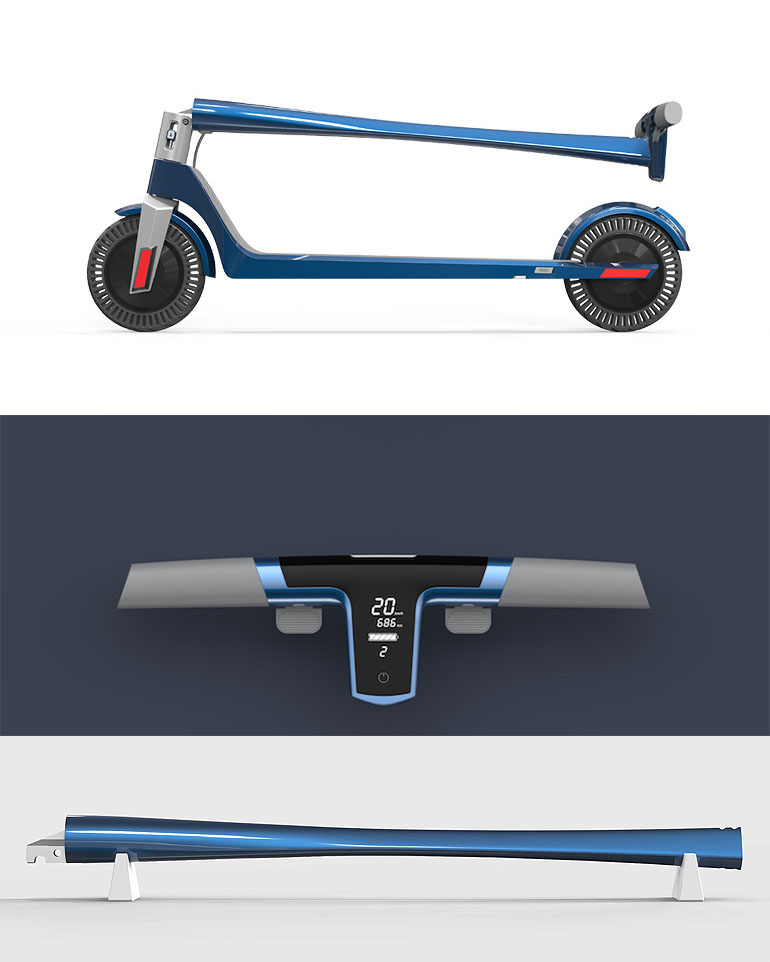 In addition to the carbon fiber steering stem and the aluminum alloy frame, the SWAN electric scooter also incorporates a carrying handle made from magnesium alloy.

Qingmai focused on designing the scooter so that it was convenient to fold and carry, ensuring that anyone could use the SWAN. The company also emphasized the design and construction decisions that were made to ensure both the convenience and robustness of the scooter:

“The folding structure of the SWAN scooter is unique. To guarantee structural strength and [aesthetic] appearance of this product, our design team has designed a highly integrated quick folding system. The scooter weighs less than 12 kg, so a girl can lift it with only one hand. In addition, the folded scooter is so small that it can be easily put into a trunk. Also, the board of the SWAN scooter is made by a unit forming process without splicing and welding points.” 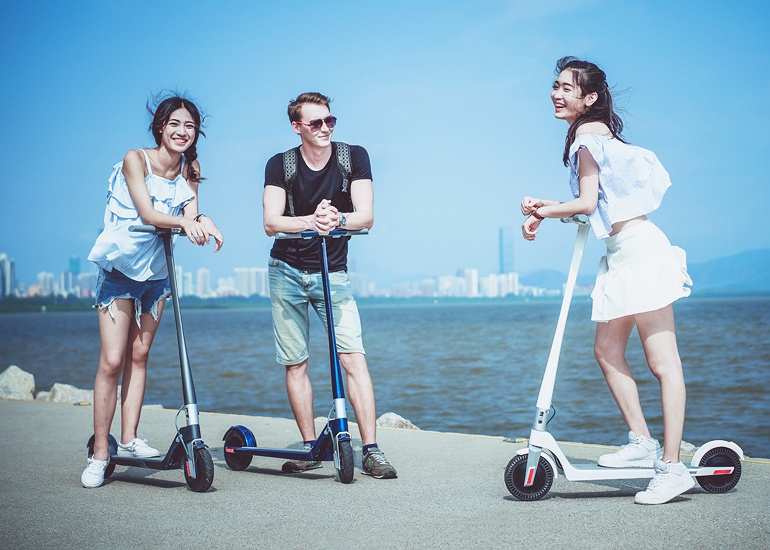 To power the scooter, the SWAN uses two motors each rated for 200 W continuous and 400 W peak, providing a total of up to 800 W of peak power. That should translate into stronger acceleration and better hill climbing ability. Plus, two direct-drive motors allow for dual-wheel regenerative braking as well.

When they aren’t being used for regenerative braking, the motors propel the scooter at a maximum speed of 25 km/h (15.5 mph). 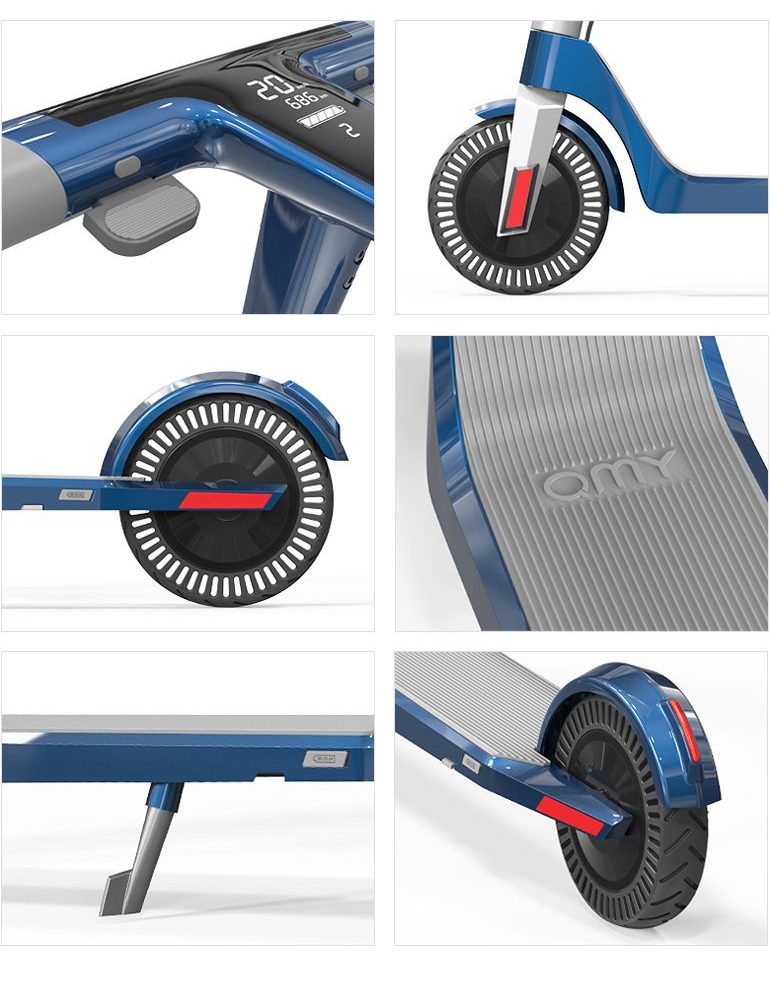 The motors are housed in the hub of each wheel, and are surrounded by 7.5″ airless tires produced in-house by Qingmai Company. The airless tires are designed to be shock absorbing for city riding as well as remove the possibility for flat tires.

For those who don’t need the extra power of dual motors, a single motor version of the SWAN is also available.

To minimize electric motor noise, the SWAN uses a sine-wave controller that is more efficient and allows for quieter operation.

That controller draws power from the SWAN’s 282 Wh battery pack, which is housed in the thin base of the scooter. The battery is comprised of 24 LG Chem battery cells, and is sufficient to provide the SWAN with 25 km (15.5 mi) of range.

The SWAN is currently available in China for￥2,499 (~$384), but expect that price to increase a bit when the scooter inevitably makes its way to the US via direct-from-China sites, especially if it is included in new tariffs that the Trump administration plans to levee against electric bicycle imports.

In my opinion, electric scooters fill the niche between electric bicycles and skateboards. They are more portable than an electric bicycle and remove the hassle of parking and locking an e-bike, while being safer and more stable than electric skateboards. With wider adoption, they could serve an important role in helping reduce the number of cars in cities while moving more people in the direction of personal electric vehicles.

One of the features I like most about the SWAN is the inclusion of airless tires, which are amazing for city use. Sure, there are aftermarket airless tires that you can install on the Xiaomi M365 scooter, but they don’t look nearly as slick as the SWAN’s tires. 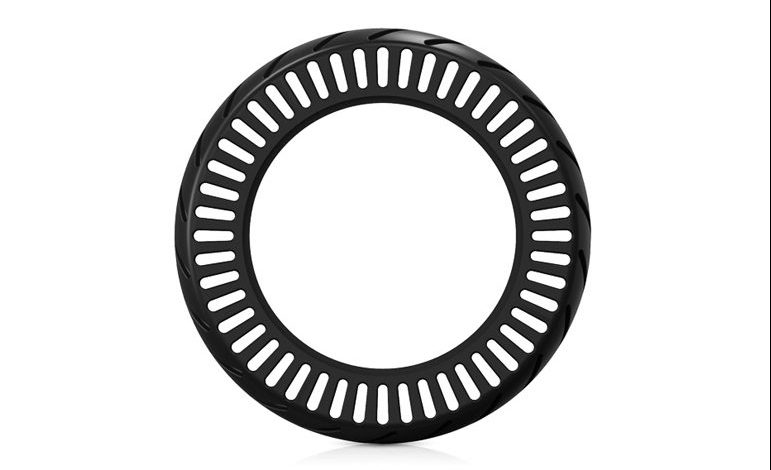 With the increased competition between scooter share companies and the near-constant debut of new competing scooter rental services, I wouldn’t be surprised if we see SWAN scooters as part of a US scooter rental fleet before we can even buy them locally.

Let’s hear what you think about these SWAN electric scooters! Let us know your thoughts in the comments below.