I know what you’re thinking, “A kick scooter?” But stick with me here, because the Xiaomi M365 electric scooter is not your kid’s toy scooter. It’s a fully fledged personal electric vehicle capable of traveling at 15.5 mph (25 km/h) with a range of 18.6 miles (30 km). It has integrated headlights and brake lights, regenerative and disc brakes, a thumb throttle for quick acceleration off the line, and to top it all off, it’s just really fun to ride. At just $499, it’s a surprisingly cheap way to replace a car, Uber or public transportation in most cities, or just to toss in your trunk or carry on the bus as a “last mile” solution.

This is the same scooter that has invaded the streets of many California cities as part of new startups Bird and Spin’s dockless electric scooter programs. To test the scooter out, I put it through its paces in a number of different city and suburban environments and scenarios. I also had my wife do a fair bit of riding on it too. I’ve ridden just about everything with one, two, three or four wheels and a battery, but she’s a little more of a beginner when it comes to personal EVs, so her thoughts should give added perspective from a new rider.

I found the M365 electric scooter was quite nice to ride, with the turning feeling both natural and responsive. For anyone who has ever ridden a bike, the basic operation is fairly similar and intuitive. My wife has never ridden a scooter before and it took her all of 10 seconds to become comfortable on it.

I didn’t expect to like standing up as much as I did, but the upright riding position was nice change of pace compared to my electric bicycle, though my wife prefers the comfort of a bike seat. Fortunately, there are a few aftermarket seat options out there for those that want to be able to sit on their scooter. As someone who spends most of the day sitting down though, standing was actually refreshing.

The fact that the handlebars are so narrow also made it easy to lane split and squeeze between cars at red lights and in traffic, though you should only do this if it is legal in your area. The wide handlebars on my bike can be problematic when passing idling cars, but the M365’s handlebars are narrow enough that it isn’t an issue. 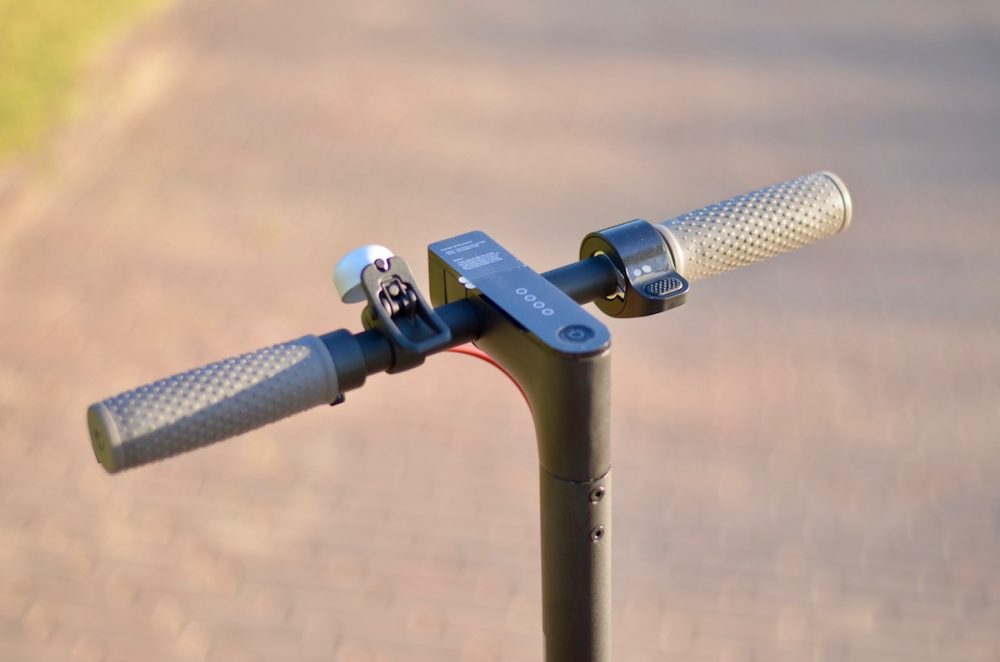 The scooter is easily maneuverable, and because you ride it in a standing position, you can really lean into the turns. If you’ve never ridden a scooter or skateboard before, this might be an odd sensation, but once you get the hang of it, its one of the most fun parts of riding a scooter!

Unlike many electric bikes with throttles, which can start from a stop like a motorcycle, the M365 scooter requires you to first kick off before you can apply any throttle. This took a little getting used to, as sometimes I would give too small of a kick and the throttle wouldn’t engage until I gave a second, stronger kick.

The steering column turns about 45° to either side, which is plenty for riding and turning in tight circles, but not quite enough for maneuvering the scooter indoors. When I’m pushing it down a hallway, I sometimes have to lift up the front to turn it more sharply. If you’ve ever walked a bike around inside, you know that being able to turn the front wheel 90° is very helpful for navigating tight spaces. Fortunately, the scooter is light enough that lifting the front end (or the whole thing) one-handed was never an issue.

The 8.5-inch air-filled tires were great at absorbing small bumps in the road, and were even decent when riding over brick and boardwalks. On cobblestones, the lack of suspension was fairly noticeable and got annoying after a while, but the scooter sailed perfectly smoothly on streets and sidewalks. I haven’t tried them yet, but there are aftermarket air-less tires for the M365 designed to dampen vibrations on bumpier terrain. I might just have to pick up a pair to give them a shot. 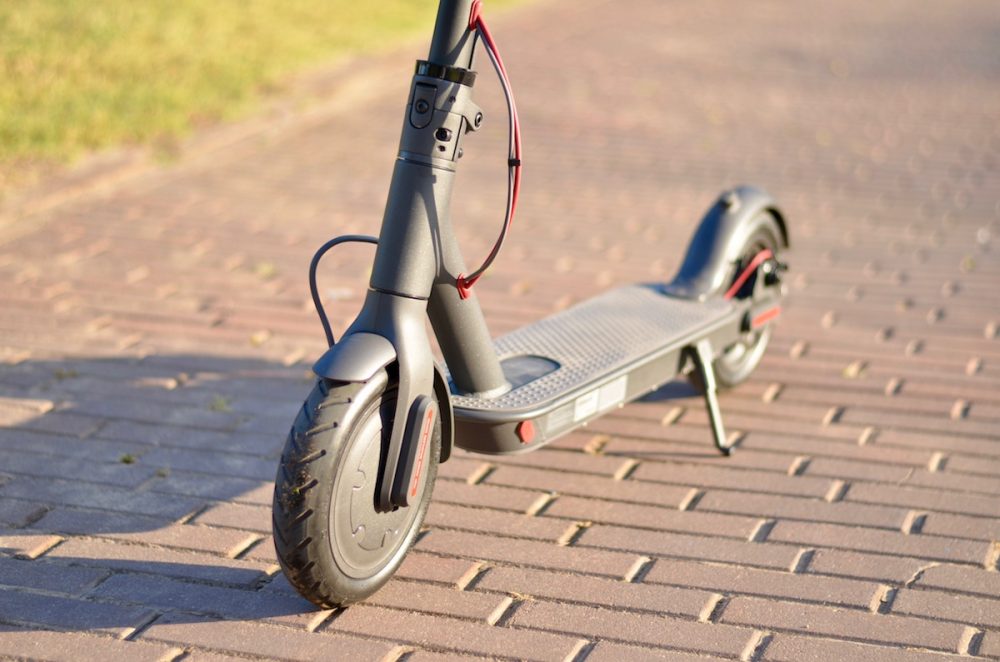 The handlebars are quite short from to end, but I didn’t find them uncomfortable. The thumb throttle is well designed and I didn’t feel any thumb fatigue like I have with some electric bike throttles. The handlebar grips are a bit wide, and my wife found them to be uncomfortable over long rides due to their width, though she does have comically small hands. You might want to keep this in mind if you also have small grabbers.

The base of the scooter is fairly narrow, though Xiaomi markets it as wide enough to fit two feet on it side by side. While I can do this, it feels a bit strange, and I prefer to ride the scooter the same way I ride my electric longboard, with my front foot pointed forward and my rear foot pointed perpendicular to the base. This position felt quite comfortable to me.

The front direct drive hub motor is listed as 250 W, but it feels like more power than that. I wouldn’t be surprised if the 250 W badge is for legal reasons, because the scooter was quite peppy off the line. The small diameter wheels help it accelerate faster as well. 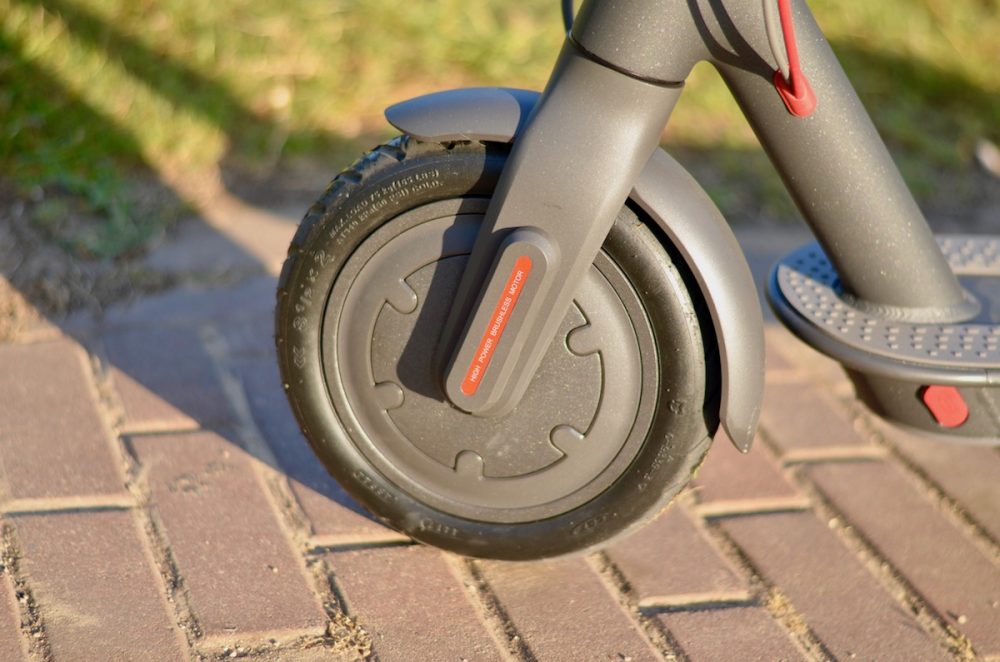 I did most of my initial riding on flat ground, where I was already impressed with the performance. I was a little worried though about how it would perform when I got to a hill. After putting off the inevitable, I finally rode to a part of town with more hills and put the pedal to the metal, so to speak. I expected to hit the first hill and feel the power instantly drop off.

To my surprise, I rode right up it! The top speed did reduce somewhat, but even on progressively larger hills, I was still maintaining at least 10 mph (16 km/h) uphill. Keep in mind, I weigh 150 lbs (68 kg), so I am on the lighter side of average. The scooter is rated for a rider of up to 220 lbs (100 kg), and I imagine the hill climbing performance won’t be quite as good as I experienced for a significantly larger rider.

Xiaomi claims that the scooter is capable of 18 mi (30 km) of range. In my testing, which did include some hill climbing, I never surpassed 27 km of range. Perhaps the range would be slightly better on entirely flat terrain. Even so, 90% of the manufacturer’s claim isn’t bad, and no one ever expects the stated range values to be entirely accurate in real world situations anyways.

The regenerative braking surely helps the rather small 280 Wh battery achieve such good range. The regen kicks in at a very low-level when you release the throttle, and engages even stronger when you pull the brake lever. If you pull the brake lever even further, you can engage the disc brake, but by timing your stops in advance and only using regen braking, you can achieve the best range possible.

Considering the low $499 price of this scooter, the build quality is actually very nice. The aluminum frame feels very sturdy, the locking mechanism doesn’t move, bend, creak or otherwise worry me. The throttle, wheels, brakes, lights, and everything else just feels really well-built and nicely integrated. Basically, it doesn’t seem like a kick-scooter with an added motor, it feels like a well-built purpose made electric scooter. 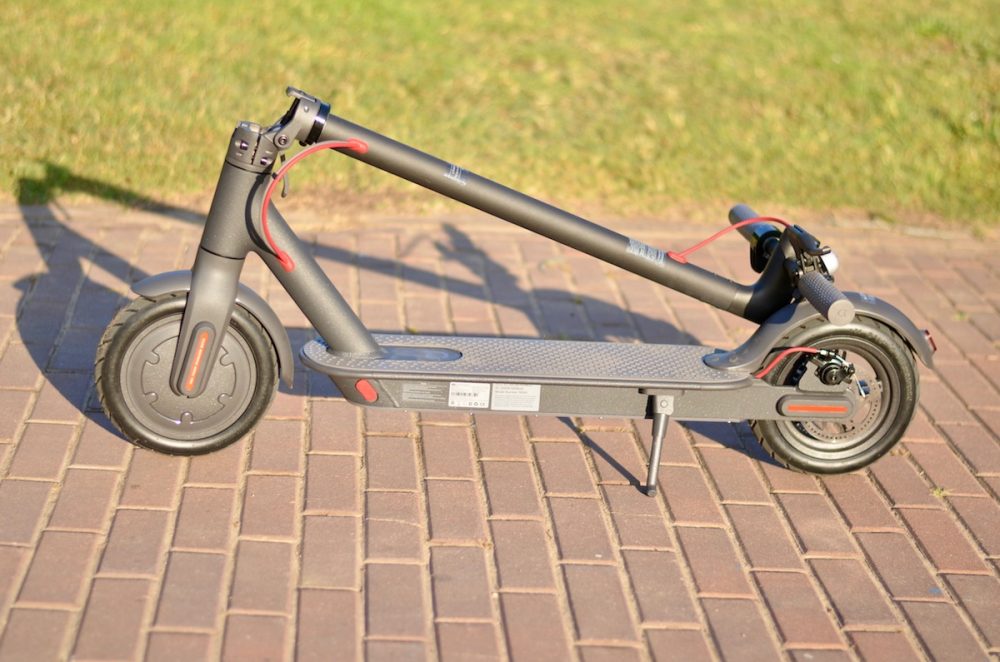 The scooter doesn’t have 101 features like some higher priced offerings, but the features it does include all work well. The lights are bright and controlled by the same on/off button that controls the entire scooter, meaning you don’t have a lot of buttons or knobs to worry about. The tail light even illuminates when the brake lever is pulled, giving you brake lights.

The folding feature is actually quite handy both to make the scooter smaller and to move it around. The handlebar stem turns into a carry handle when the scooter is folded, allowing you to carry it like a briefcase at your side. At a restaurant or bar I can simply fold the scooter and stick it under the bench or out of the way in the corner.

One of the coolest features is the companion app for the M365 scooter. Not only does it allow you to monitor your trip stats such as speed, distance, and time as well keep tabs on your battery health, cycle life and charge status, but it also works as a built-in alarm activator too. If you plan to use your phone as a display while riding the scooter, such as for using maps or the companion app, I’d recommend investing in a good quality phone holder. The lack of suspension means bumps under the front wheel travel right up to the handlebars and could send your phone flying if you have a cheap holder. Of course this is where those aftermarket hollow damping tires may come in handy. 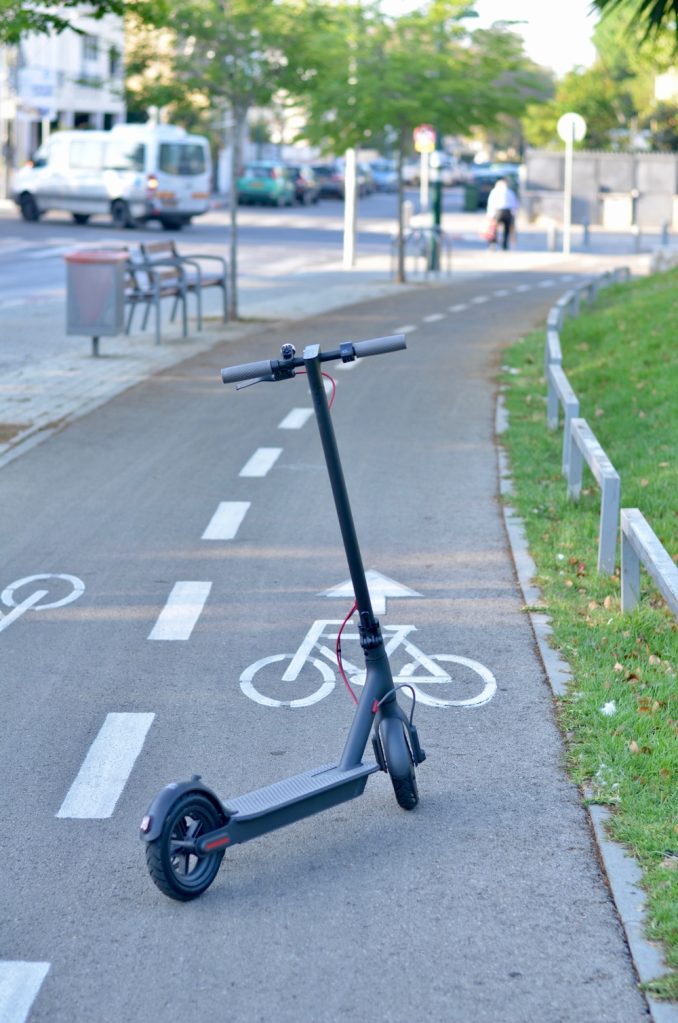 I didn’t expect to have so much fun on this scooter, but it is really a blast to ride. I think that it could be an excellent car or bus replacement for many people who live in a city where traffic doesn’t often reach speeds higher than 20 mph (32 km/h), or that have good bicycle lane infrastructure in place.

I think my single largest complaint would be the lower speed of the M365, limited to just 15.5 mph (25 km/h). I’m used to riding an electric bicycle that travels nearly twice as fast as that, and so I found myself reaching top speed and longing for more. But considering that most people walk at 20% of that speed, I think it is appropriate for most urban scenarios and pleasure riding.

If you’d like to get your own, you can find the Xiaomi M365 on Amazon for $499 in the US or on Gearbest for $540 outside of the US. You can also check out my video review below.