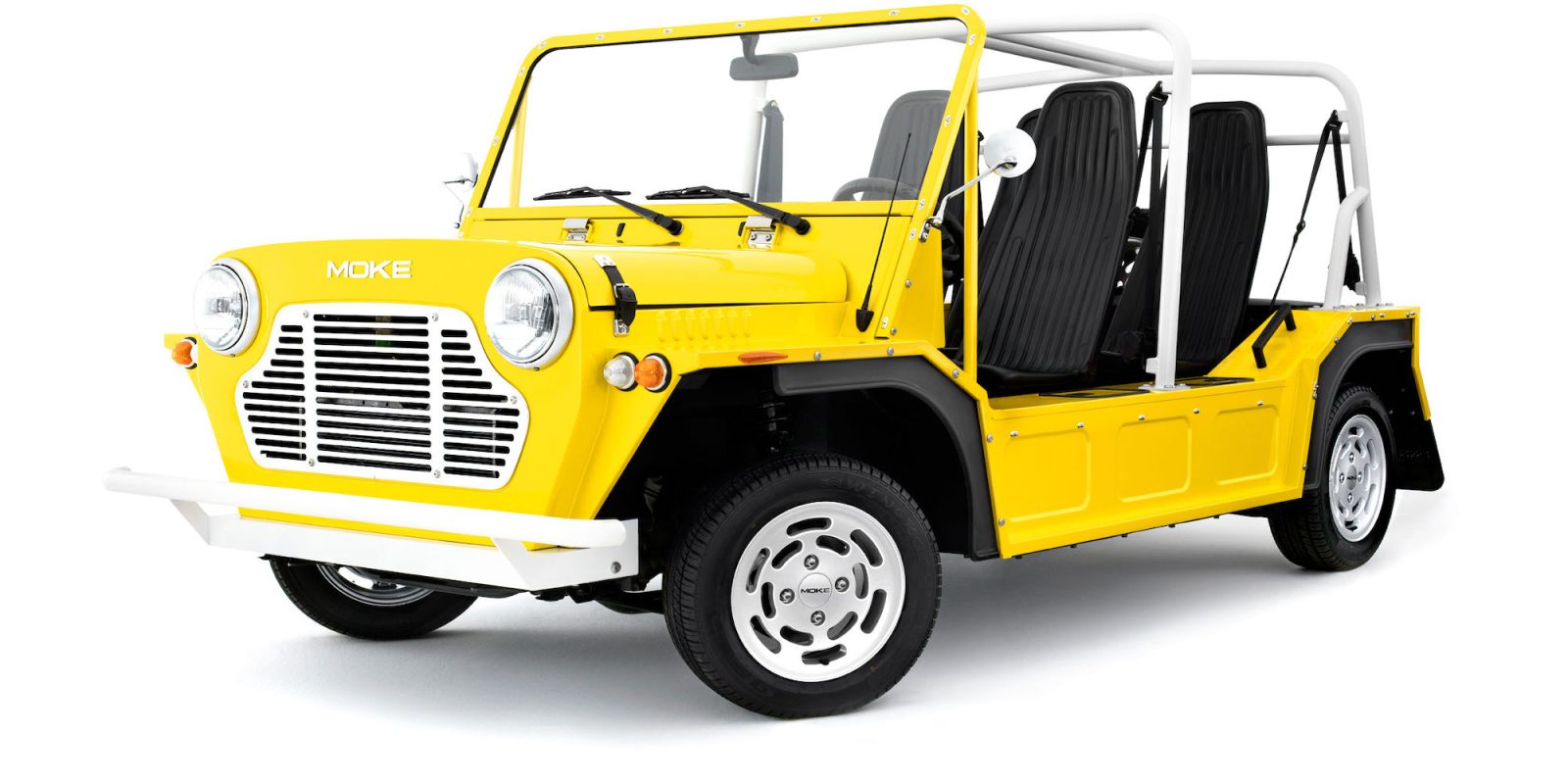 As we depart the Paris Mondial Motor Show, we’ve seen all matter of electric vehicles from Tesla and the big legacy carmakers, new ebikes that use new 2170 cells all the way down to Chinese scooters. But one big surprise was seeing the iconic Moke mini Jeep-like electric vehicles in not just one but two different booths in a variety of shapes and sizes, including a speedy, AWD version with…

First of all, for those not familiar with the Mini ‘Moke’ (British slang for donkey), that iconic vehicle that looks like a dropped Willys Jeep rolling with Prius spare tires above is derived from a British post WW2 program to design a vehicle that could be parachuted in behind enemy lines. It gets its chassis and its name from the iconic Mini. But shockingly those toy wheels and subsequent ground clearance didn’t do great on or off war-torn roads, so their use in war was thankfully not to be.

But the quirky, inexpensive vehicle wasn’t dead yet. Just like the Jeep in the US, the Mini Moke saw post war popularity for its open air cabin and the all around simple fun it evoked. The brand, also like Jeep, went through a couple of hands including the original British Motor Company/Austin, an Australian run and a Portuguese version which I experienced in Macau below. 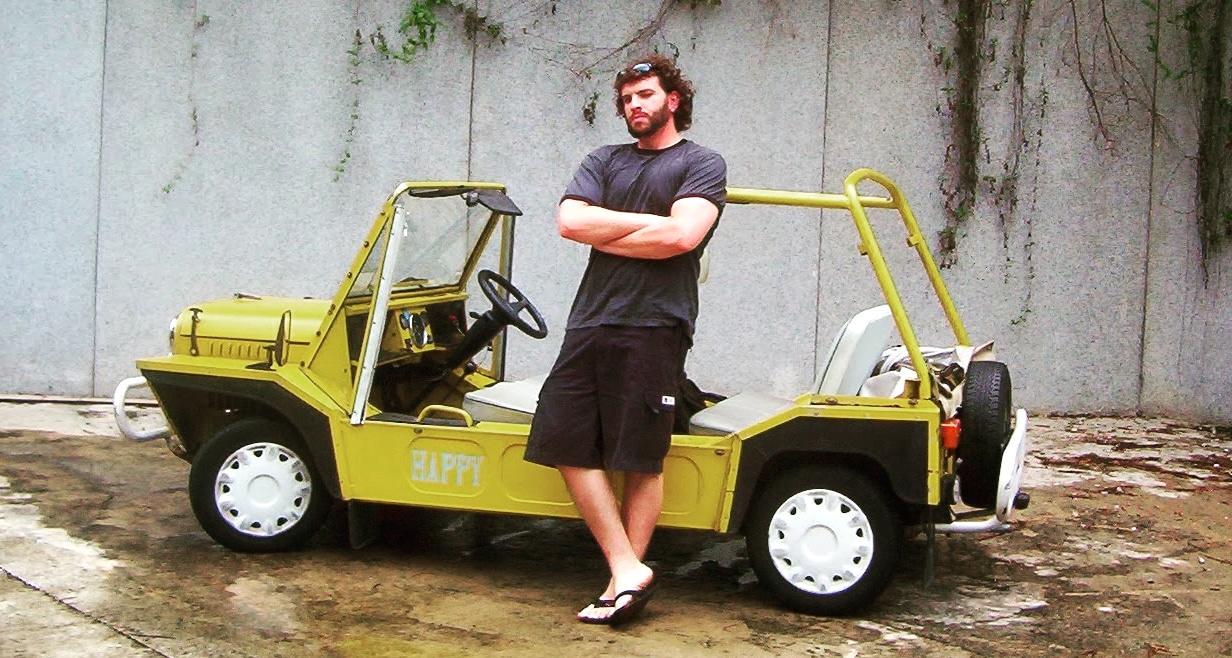 It was a ton of fun to drive even on shady Macau/Portuguese left side roads with a 4 speed left hand controlled manual transmission. While it looks like a Jeep, sort of, it rides so much lower to the ground and it actually corners nicely. Racing Mokes around Macau achieved legendary status in our office full of expats.

Mokes ended up being the preferred beach cruiser in the South of France and around the world on islands where long-range, high-speed (and safe) transport wasn’t a priority over open air ruggedness and low costs.

However, in 1993, the Portuguese production run of these ended and the Moke was relegated to collector’s status.

The Moke never really went away however. You can still rent them inexpensively on islands and their simple design is easy to fix and keep up.

Perhaps that’s why so many companies have been selling electric Mokes recently. There are currently companies in Belgium, Spain and even Miami but they all seem to be sourcing these slower neighborhood electric vehicles from China.

These mostly top out at 75kmh and are capped for local low energy vehicle laws. For instance, in France they are only 45kmh, but that’s actually cool because 14-year-olds and people busted for drunk driving can drive them.

That brings us to this week’s auto show where there was not one but two companies advertising new electric Mokes that are capable of 120kmh speeds with significant range and street legal chops.

The first company I visited calls themselves EMokeGroup and has been selling the Chinese version mentioned above in France for quite some time. Their new product is called the JumMoke and it will be built in France (or at least assembled) and fully road compliant to 120kmh/75mph speeds.

Additionally, this Moke has a more raised suspension, AWD on bigger, thicker wheels and a stated range of 200km or about 125 miles. That’s impressive when you look at the aerodynamics of the Moke, but I imagine that city driving will still be more of the norm than highway. 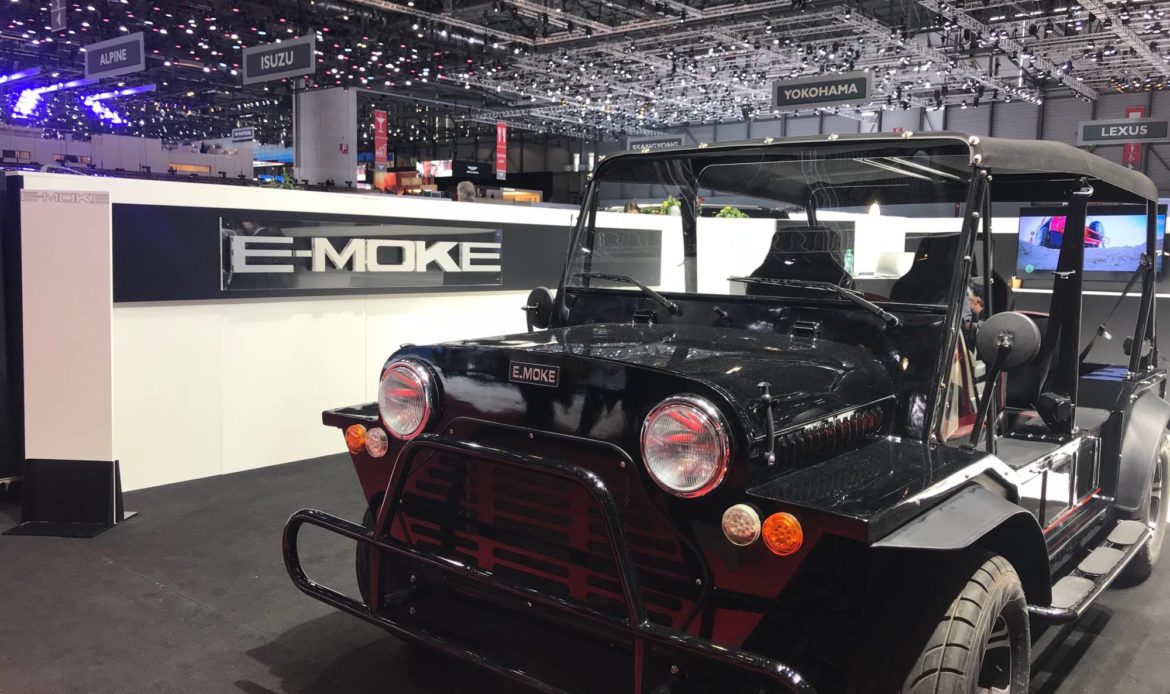 Is this an electric Jeep yet?

I don’t think I’d yet trust this thing to go way off-road. It will certainly be OK on dirt roads and sand however, which might make this the perfect vehicle to take on the beach? They are taking orders now for a spring 2019 deliveries in Europe. I think if you are willing to pay for shipping to the US and deal with the registration headaches, they will ship them stateside as well. 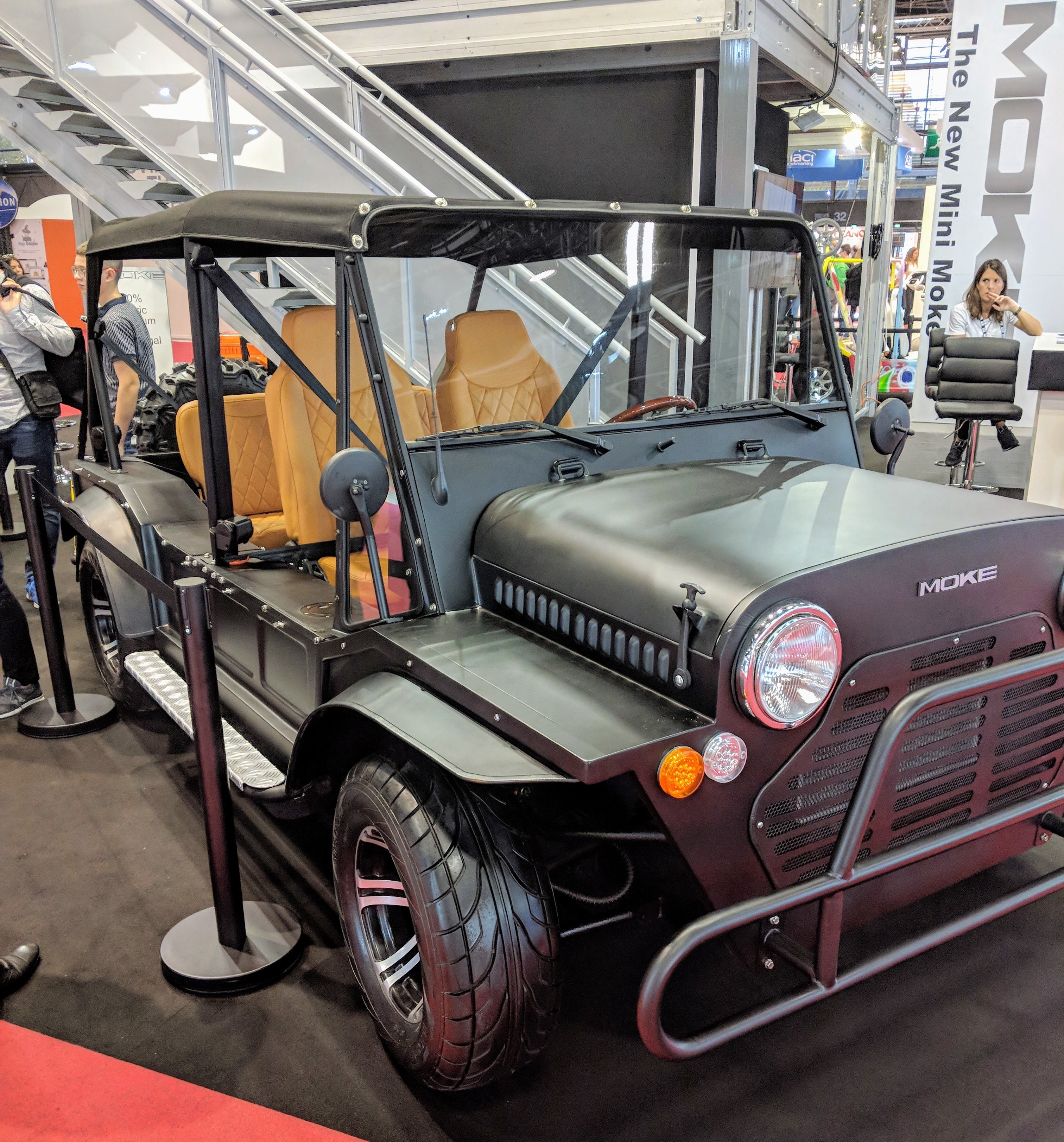 Not to be outdone, at a booth about 100 meters away, Moke International which makes petrol versions of the Mini Moke and lays claims to its British heritage also unveiled its own 120kmh Moke.

Details were slim on this one but it appears to be more of a conversion with 44kW (Peak 80kW) Elaphe in-wheel motors (I snagged a spec sheet and included it below) with a 22kWh 100V battery. The range on this one is 50km less at 150km total, but might be more realistic. 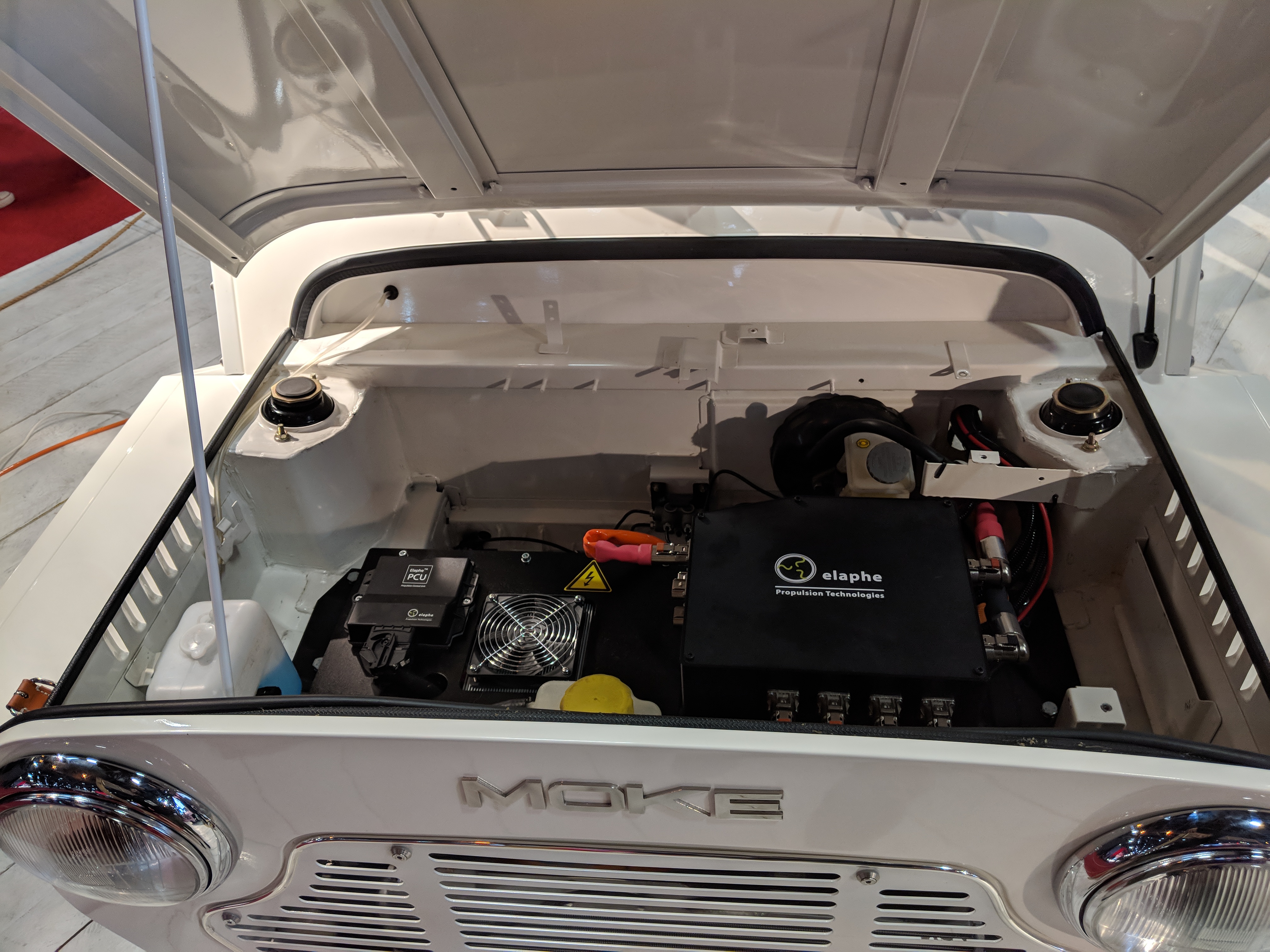 Moke International says it owns the rights to the street legal, full speed Mokes and plans to go after the Emoke Group for building a fully street legal version. I don’t want to speculate on who owns what rights, but that sounds like it is going to be a hassle for the companies which make the Moke and is a shame if it keeps customers away from these two vehicles.

Competition-wise, there isn’t any one vehicle running away with the low-cost, fun EV market. Jeep has said they would be electrifying their Wrangler by 2020 but I wouldn’t bet on it. On the low-end, GEM cars that are now owned by Polaris, can provide a similar experience, but they are more for work than play. Also high-end golf carts may make their way onto streets.

If these companies can straighten out their legal issues and produce quality Mokes, I think there is an audience waiting for them. We’d love to review them next year in Paris…or Macau. Stay tuned. 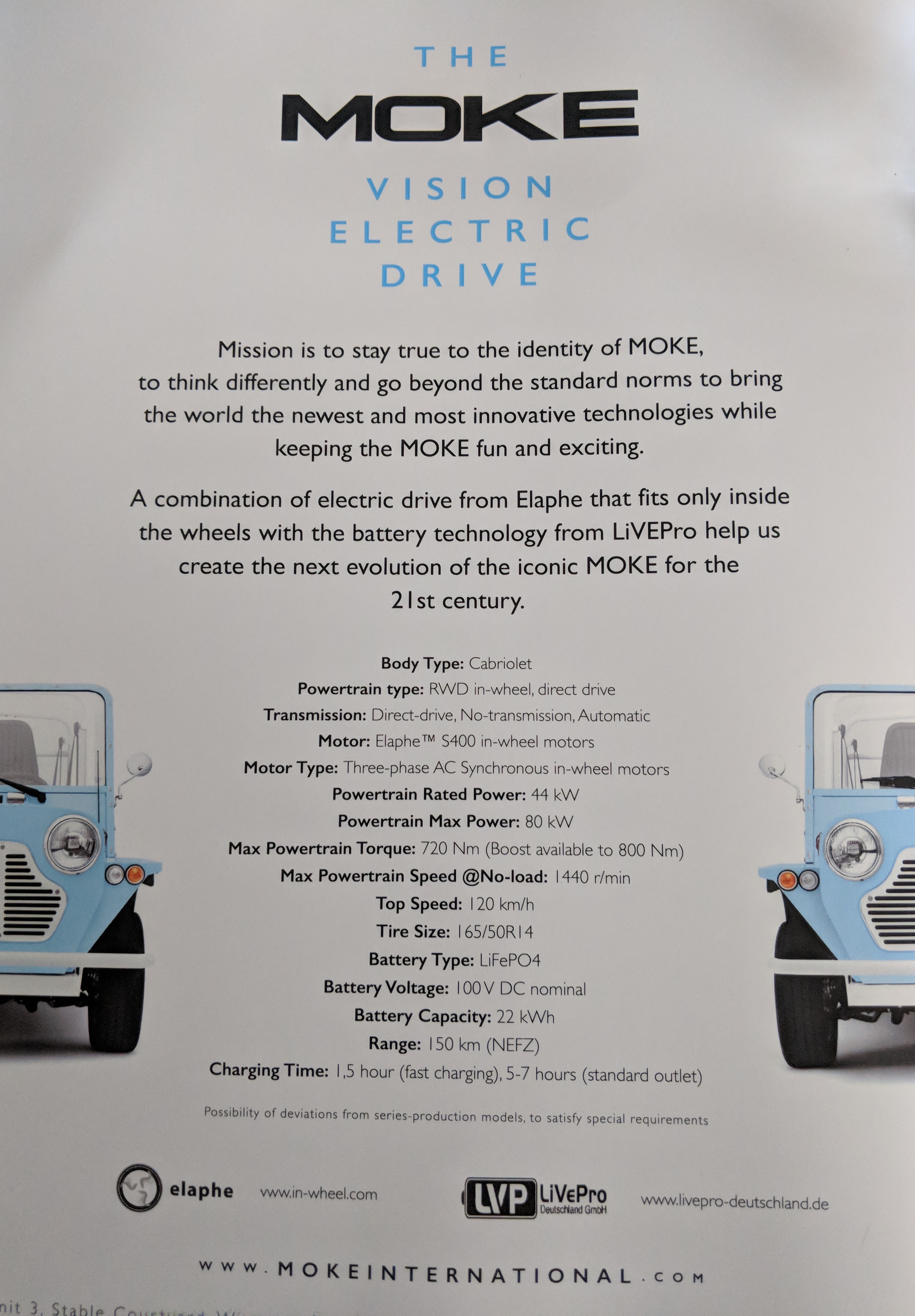