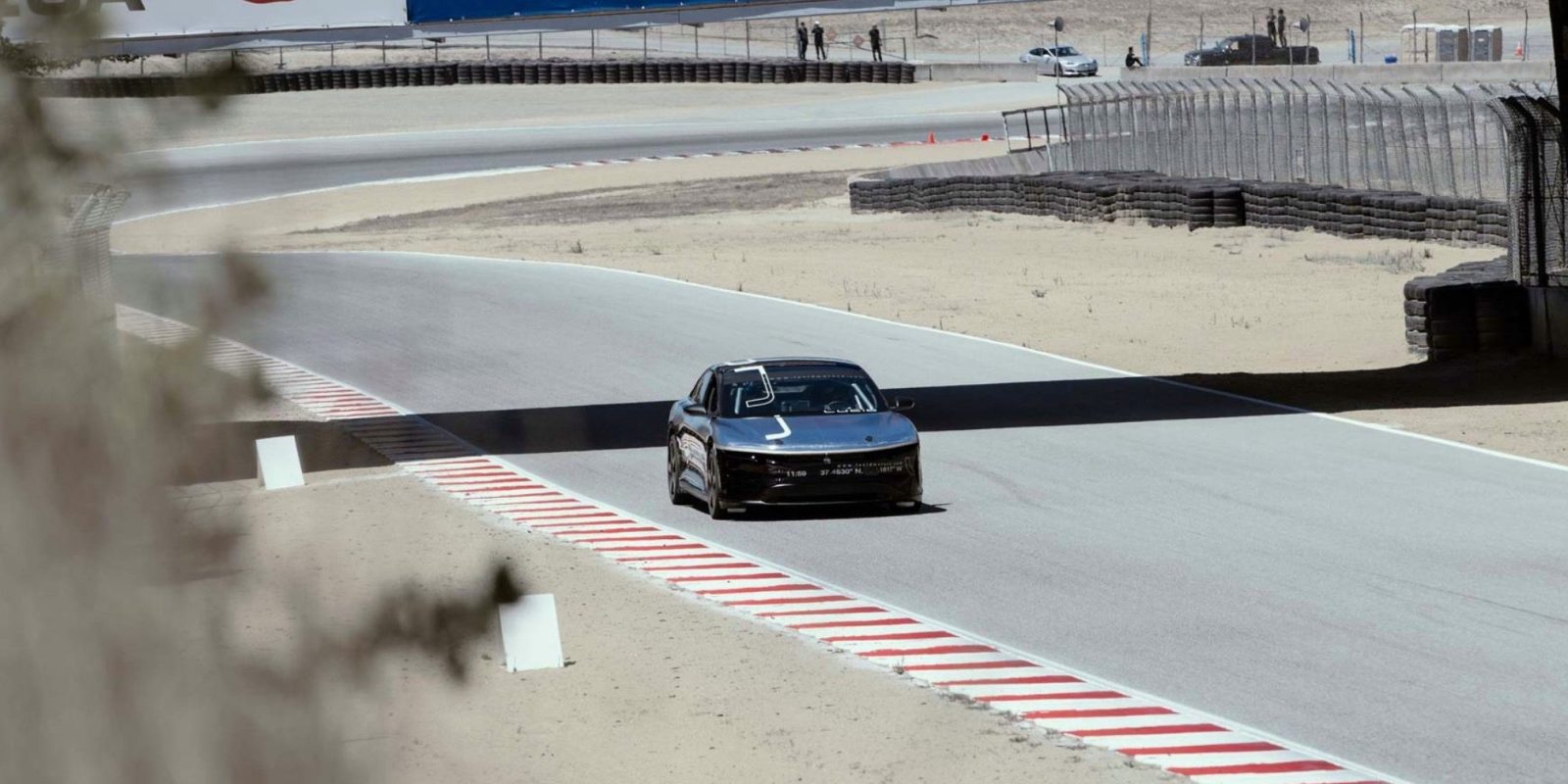 Laguna Seca is becoming a popular track for manufacturers to run their vehicles around.  Just a few weeks after Jaguar announced that their I-Pace set a “production EV lap record” at the track, Lucid has announced today that their upcoming Air sedan positively smashed that time, setting a 1:41.67 time in comparison to Jaguar’s 1:48.18.

The caveat here is that the Lucid is not yet a production car, and though Lucid claims the car’s powertrain was configured with “showroom intent,” it featured modified high-temperature brakes and a stripped-down interior with rollcage, racing seats and fire suppression system.

In addition to their 1:41.67 time, Lucid actually set an even faster lap on racing tires.  The 1:41 was set on production tires, Pirelli P Zero PZ4 summer tires, which are performance-focused but can be used on normal streets – as long as there’s no snow around.  They also managed to set a 1:39.30 time on Pirelli P Zero Trofeo R tires.  These tires are road legal, but are considered track/competition tires for cars which see a lot of track days or autocross use, rather than commuting and the like.

Lucid claims that the car only differs “a few percent” from production weight, but the addition of better brakes and the stripping of weight from the interior and addition of rollcage for better chassis rigidity can certainly affect performance.  Nevertheless, it’s unlikely that these modifications would manage to shave 7 seconds off of the car’s time on their own, so it’s likely that even a bone-stock Lucid Air would be able to beat the bone-stock I-Pace record.

Lucid’s car was also driven by an engineer, whereas Jaguar hired a professional racing driver to set their lap.  Similar laps to Jaguar’s have been set in Teslas as well – in fact the fastest-ever Laguna Seca lap done in a Tesla was set by a Lucid engineer at this year’s Refuel Races event in July.

Last year, Lucid also managed to clock the Air at 235mph (378km/h) around a high-speed test track.  It looks like this car definitely has more than enough performance to go around.

The video of the lap shows a very bare bones car on the inside – it certainly doesn’t look anything like “showroom intent,” or like the concept I saw last year at a Lucid event in LA.  It actually looks a little bit more like the engineering prototype which we got to ride in at that event, which had a stripped interior (though it had backseats instead of a rollcage).  That car was definitely nowhere near production intent.

So I think, as is the case in a lot of these announcements, Lucid is fudging it quite a bit when they use the words “showroom intent” in their blog post announcing this feat.  This is not a showroom car, but this is still an impressive time compared to the car’s closest production analogues.

Electrek’s Fred Lambert mentioned in his last article that Jaguar’s record would likely be beaten soon.  Their record still stands, because Lucid’s car is not yet in production and their prototype was modified significantly.  But when and if Lucid does produce their car, it certainly seems that they would be capable of beating Jaguar’s lap time, even with a fully stock car.  7 seconds is huge amount of time, especially around a relatively short track like Laguna Seca.

As for comparisons to Tesla, if a professional driver took a lap around Laguna Seca and extracted the maximum lap time out of the highest-performace model available now (a P100DL or Model 3 Performance), with reckless disregard for their insurance premiums, it’s possible they could manage to shave 7 seconds off the best-yet amateur time.  But considering Lucid’s time was also set by a non-professional driver anyway, Lucid does seem to be out on their own here.

So this car is definitely fast.  Now, of course, they just need to make it to production.  Which is no small task.

Then the 1:39 on competition tires: