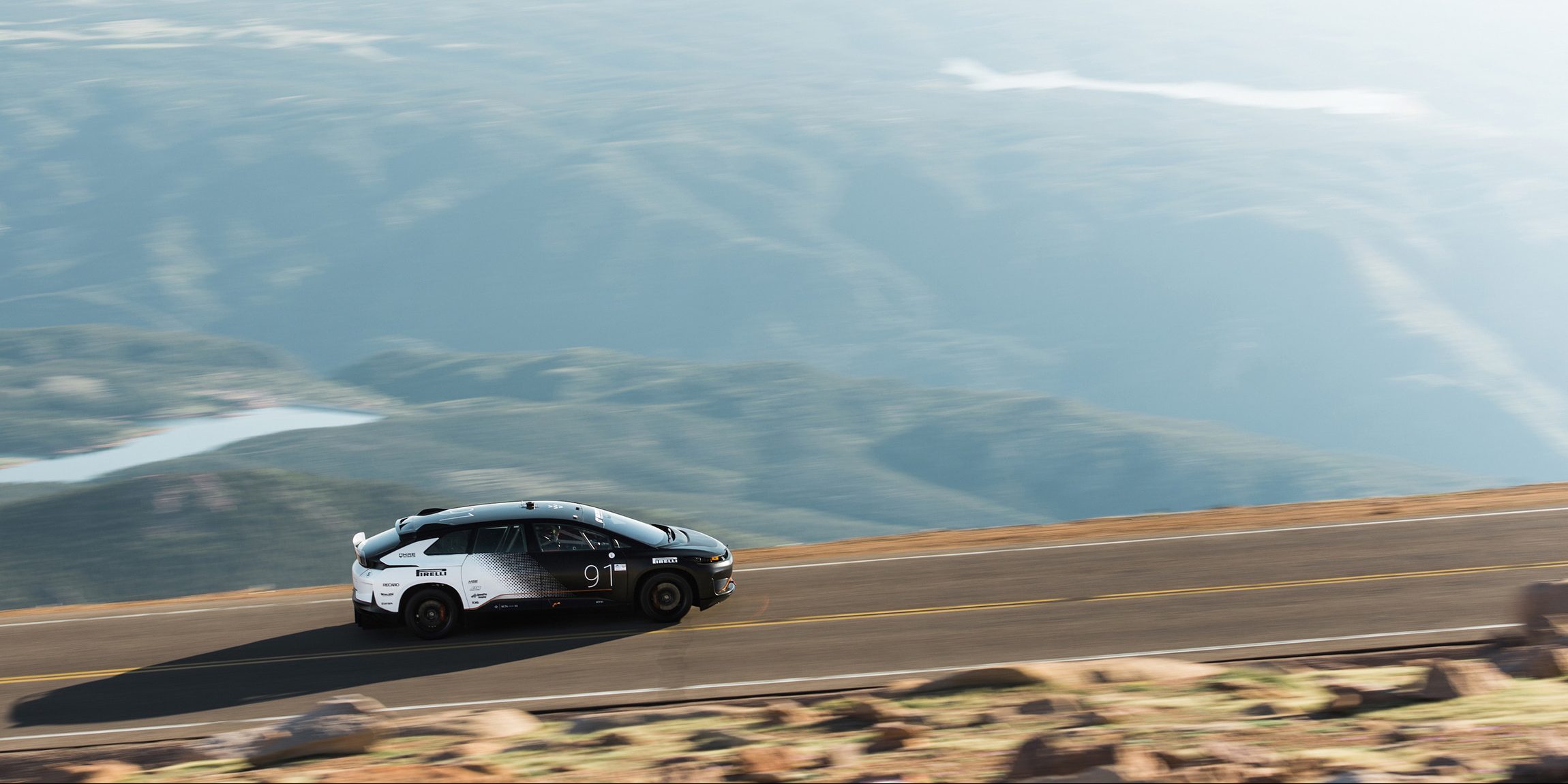 Everywhere you look, EV records keep improving.  Our newest example is Faraday Future’s FF 91, which took on the Pike’s Peak International Hill Climb this weekend and shattered the previous record for a “production” EV, set last year by a stripped but otherwise mostly unmodified Tesla P90D.  The FF 91 beat the Tesla’s time by over 20 seconds, setting a time of 11:25.083.

Production is in quotes because, as we know, the FF 91 is still production-intent, rather than actually currently being produced.  It’s possible that they’ve jumped the gun deeming this a “production” record, much as Audi did when they declared their R8 e-tron had attained a “production” EV record around Nurburgring in 2012 (despite the car project eventually being killed off).  We also saw a recent “production” EV record from the NIO EP9 around Nurburgring, another car which fuzzes the definition of “production.”

For their part, Faraday Future is careful to state that their car is “production-designed” and uses “production representative hardware,” so I guess we can give them this one.

Pike’s Peak is one of the longest-running races in the world, being held 95 times since 1916.  It’s a famously unforgiving race, as cars climb a 156-turn, 12.42 mile-long (20km) track which also spans nearly a vertical mile (4,720ft/1,440m) and averages a 7.2% vertical grade.  Until 2011, the track was largely unpaved on dirt or gravel roads, and it is not uncommon for cars or motorcycles to leave the track and crash into the woods or, worse, end up tumbling down the mountain.  The race is also commonly stopped by rain, snow, fog, or other inclement weather of the type you commonly get at the top of mountains (this year’s race saw hail at the summit at one point).

One of the enduring challenges of the race has been its high altitude.  Since the race starts at 9,390 feet (2,862m) and ends at 14,110ft (4,300m), the air is very thin, which means aerodynamic modifications (such as wings) on cars don’t work as well, and internal combustion engines don’t have as much oxygen so they lose a lot of power.  As a result, winning gas-powered cars have in the past needed to have extremely high horsepower ratings to be competitive, since they operate so inefficiently at high altitude.

But electric vehicles don’t need to combust oxygen, so they work just as efficiently at 14,110 feet as they do at sea level.  So between a fully-paved road (finished in 2011) and improvements in electric vehicle technology, times have been tumbling recently and electric cars and motorcycles are setting extremely good times.

Two years ago, an electric car won the race overall for the first time (Rhys Millen driving the Drive eO PP03 – though he was running on half-power for half of the race due to electrical issues), and in 2013 Lightning Motorcycles’ LS-218 beat the fastest Ducati by over 20 seconds.  The best EV motorcycle time is within just a few seconds of the fastest gas motorcycle time ever, and the electric car lap record is faster than any other car category except the “unlimited” prototype category (in which the record is held by legendary rally driver Sebastian Loeb driving the 1,929lb/875kg, 875hp Peugeot 208 T16 Pike’s Peak).

So Faraday came to the race expecting a good time, and they got it.  Faraday’s press release notes that they beat “the standing production-designed EV record by more than 20 seconds.”  Of course, that previous record was held by the Tesla P90D which took on the course last year, setting a time of 11:48.  For some reason, Faraday Future still seems reluctant to mention Tesla, much like how they referred to the Tesla as a “benchmark vehicle” in their reveal event.

A Tesla P100D was supposed to race this year, but when race day came the team from Unplugged Performance didn’t show (we’re not sure why).  It’s likely that a P100D would have fared better than the P90D, but 20 seconds is a lot of time, even on an 11-minute lap.  So Faraday’s time here is quite impressive.  It should also be noted that neither car is really designed to be a “track car,” so it’s extra impressive to set such good times in a place which is quite out of their element.

We don’t have video of the lap yet, but we have a few short videos of the FF 91 doing practice launches from last week’s practice sessions, which you can see in our previous article from last Friday.  Faraday will release a “full account” of their visit to Pike’s Peak in the coming weeks, so we’ll be on the lookout for that.