This weekend Lucid Motors held some private events in the Los Angeles area to show off their car to VIP guests and media, and Electrek was on hand to get a first-hand look at the vehicle.

The show car definitely provided some clues as to where Lucid thought of their model name – the “Air.”  The interior has a very airy feel, with windows running across nearly the entire top of the car…

Laying back in the reclining rear seats offers a wide view of the sky – except for the c-pillar crossmember just overhead.  I couldn’t quite stretch my legs all the way out with the seat in full la-z-boy reclining mode, but the nearly-lay-flat rear seats are quite spacious nonetheless.

The large windows on top of the car also offer much better rear-seat visibility than in most cars – rather than feeling disconnected from the distant, narrow aperture of the front windshield as in normal cars.There are four interior stylings available so far, all named for locations within California. 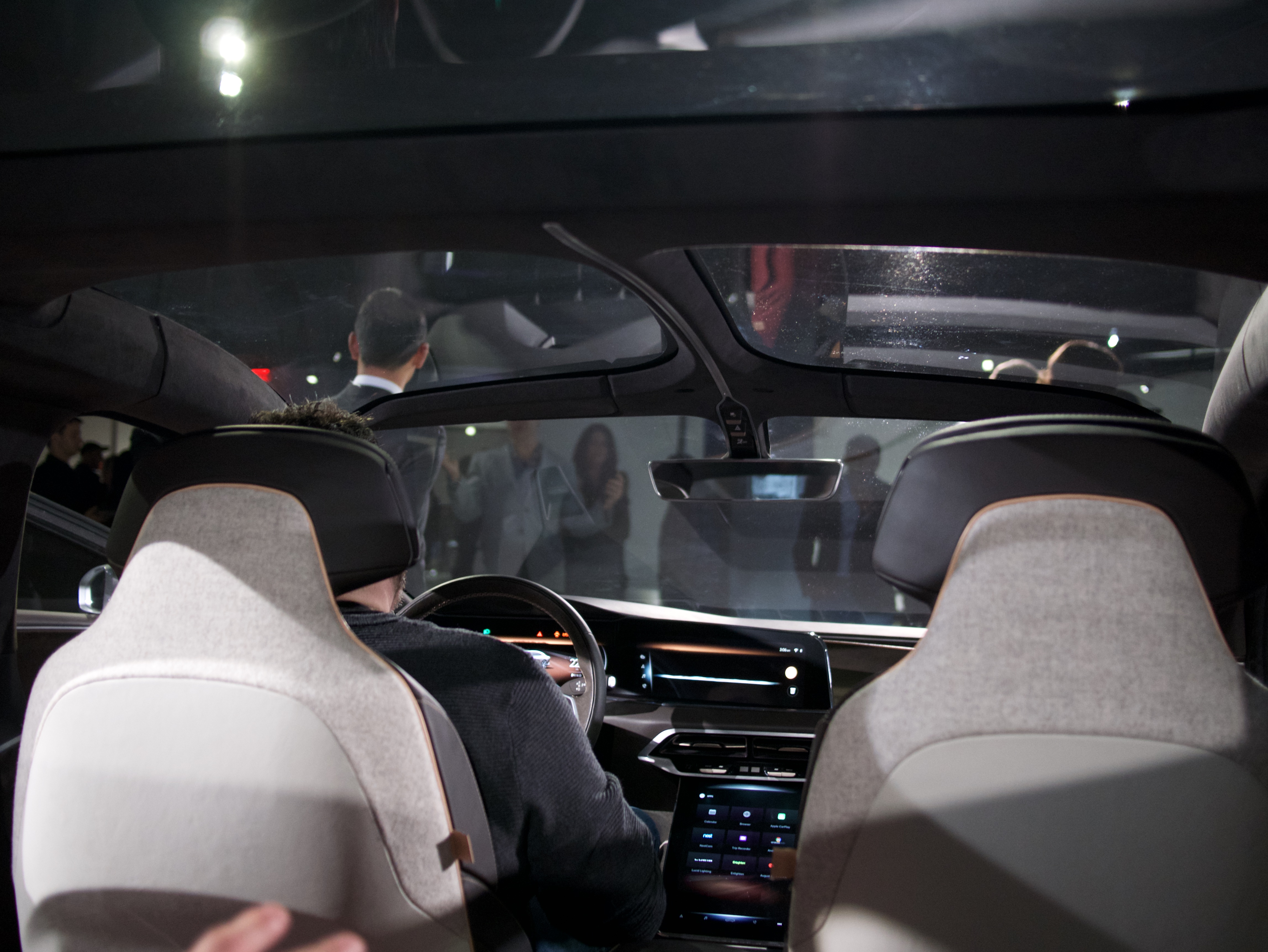 The color palettes are meant to represent these locations, each at a specific time of day – Mojave represents the desert at night, Santa Monica the ocean on an overcast morning, Santa Cruz a bright day at the beach, and Tahoe the woods near sunset. 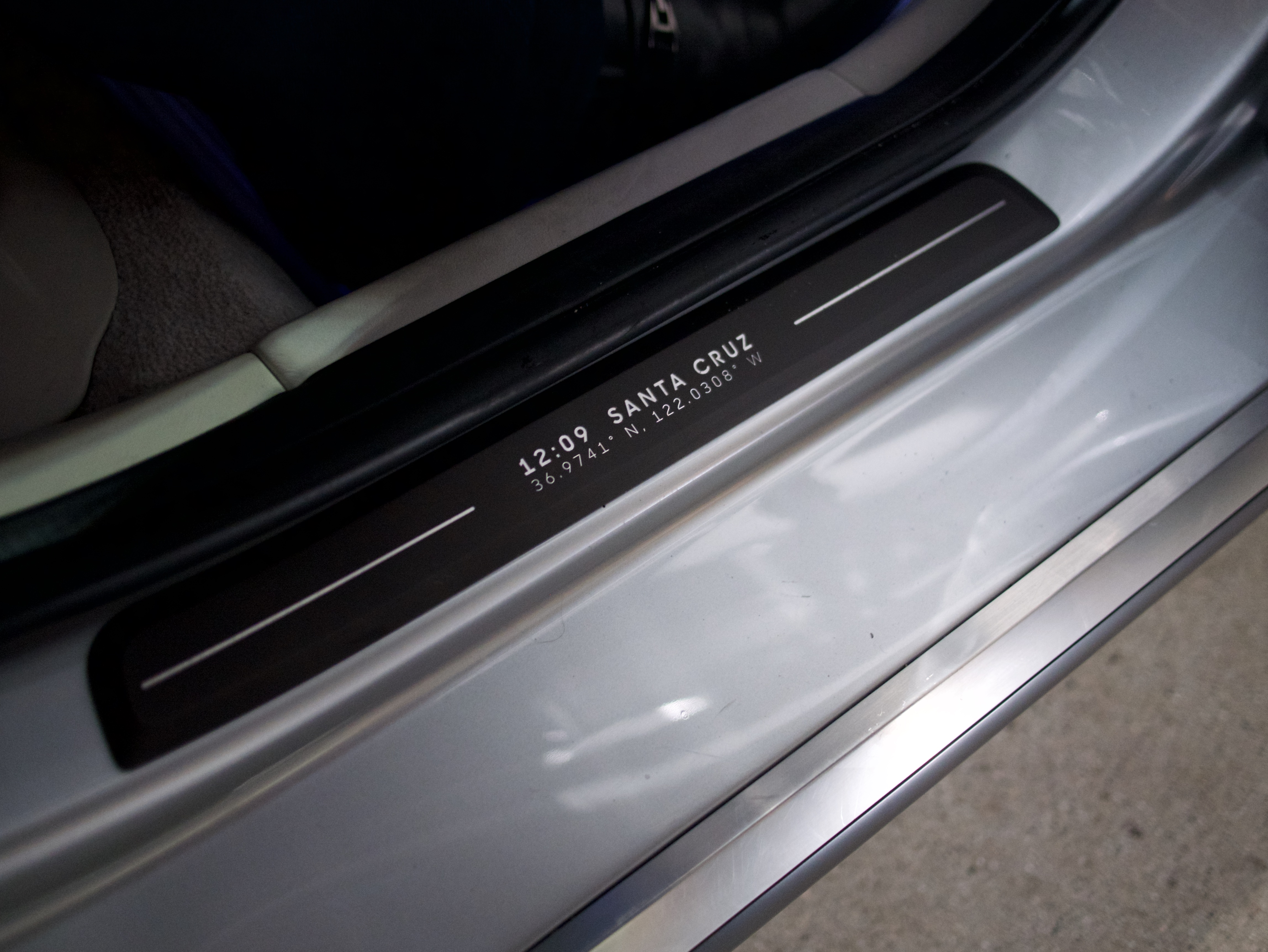 The name of your chosen interior appears on the car’s door sill panels.  Not only is the name of the interior written there, but also the precise coordinates and time of day which generated inspiration for the interior color palette.

In front of the driver is a three-panel touch-sensitive instrument display.  Above are demonstrations of what the screen looks like when driving, charging and when the autonomous driving “copilot” is activated.  In the driving photo, car controls are on the left screen and media controls are on the right screen.  In the copilot photo, the car draws an arrow showing it’s intended path – changing lanes to pass a slow-moving truck up ahead.

The steering wheel has a selection of manual controls, but more importantly it has a speech recognition button.  Lucid is working on natural speech recognition technology which will be able to listen and interpret natural commands (they gave the example of an Amazon Echo) instead of only having a list of a few specific keywords for vehicle commands.  Voice recognition will be aided by 12 interior microphones which not only listen for voice commands, but can use beamforming to detect which specific passenger has issued the command and respond to them specifically.  Lucid didn’t give examples of what this would be useful for – perhaps individual control over heating/air conditioning? 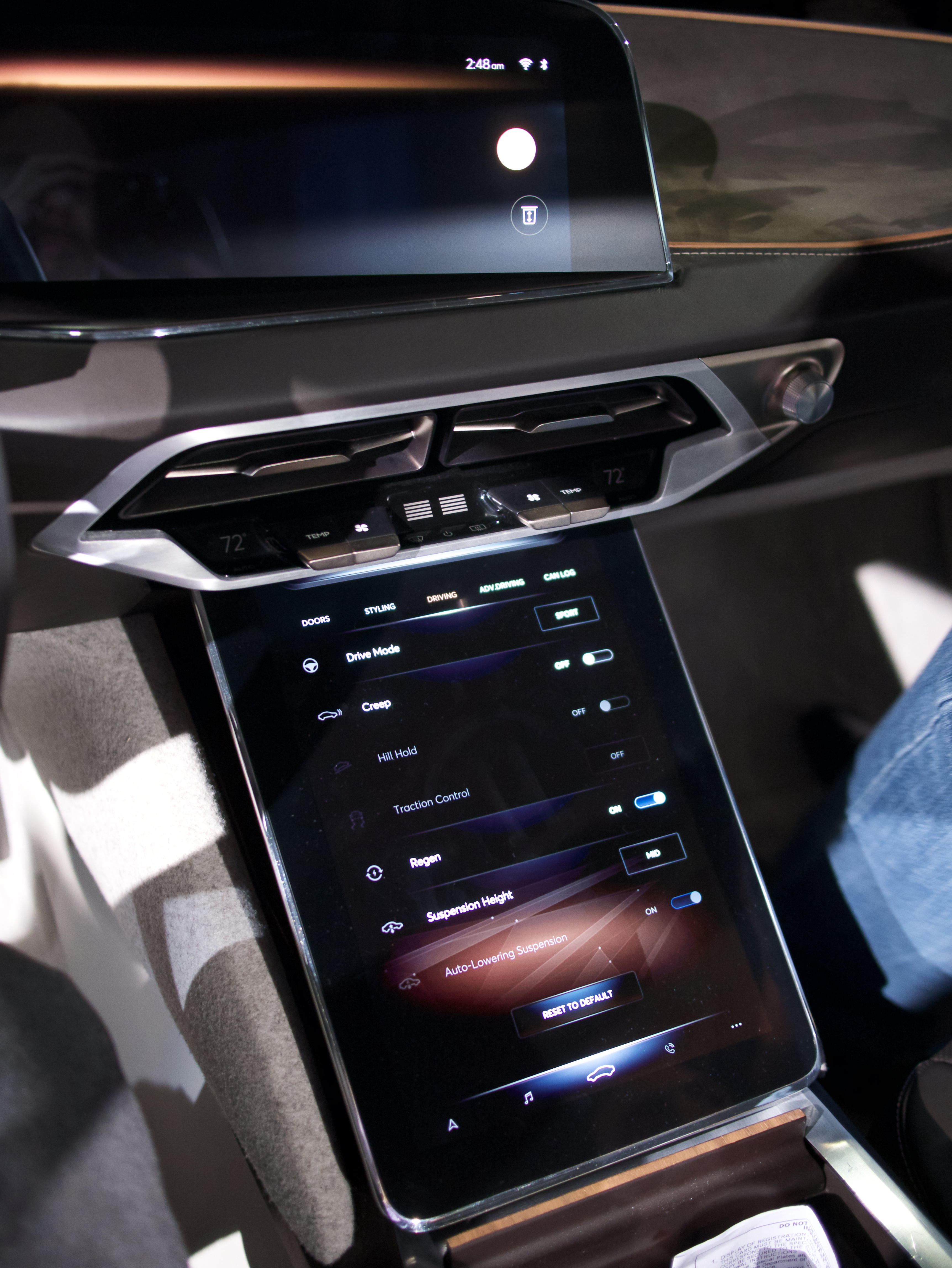 A large touchscreen dominates the middle of the car (seem familiar?) with access to many vehicle controls.  This is a development menu visible in the photo below, which will probably change before production, and which we’ll go over in a later post.

The touchscreen also has one more fun feature, giving control of the interior lighting.  Here’s a video from the passenger seat, putting on a little lightshow in the passenger footwell:

In the coming days we’ll post some more insights from the event, so stay tuned.