Tesla has been increasingly relying on its mobile service fleet to improve its coverage as its customer fleet is rapidly expanding.

They have now unveiled a fun video showing the making of their modified Model S used for its expanding mobile repair service.

We didn’t think that it was very cool to show up to fix an electric vehicle with a combustion engine van. It really bugged us. Some really savvy technicians on our team figured out how to retrofit Model X to fit all the tooling and parts needed to do service.

We took a closer look at one of the mobile service Model S vehicles that a supplier brought to an event earlier this year.

But now Tesla is showing off how it is modifying these vehicles to create their electric mobile service cars:

Turns out 80% of repairs can be done without visiting a service center – we’re doubling our Mobile Service Fleet globally this year pic.twitter.com/gW3dJKkYgA

As you can see, Tesla removes most of the interior in the back of the Model S, including the back seat, and it installs tool racks for technicians to work out of the car: 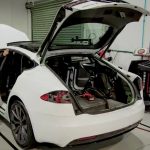 The automaker claims that its mobile technicians can fix over 80% of the issues on Tesla’s vehicles without having to bring the cars to a service center. We have even seen a Tesla mobile service unit swap seats in a Model S on site.

As of this year, Tesla says that mobile service is already responsible for 30% of service jobs in North America.

They are now trying to bring those vehicles to other markets, including in Norway where they are needed to fix Tesla’s long delays in service in the market.