In today’s Q2 earnings report, Tesla has claimed that the Model 3 is not only the best-selling premium mid-sized sedan in the US as of July, but that, even in the middle of its production ramp, it is currently outselling all other vehicles in that segment combined.

To illustrate their claim, Tesla released a graph inside the earnings report, showing that the Model 3 has achieved 52% market share in the segment in the month of July.

For these purposes, Tesla counts the BMW 3-series, Audi A4, Mercedes C-class, Lexus IS and Jaguar XE as “mid sized premium sedans,” and this analysis is only limited to the US, not Canada or other regions like Europe and Asia where the Model 3 is not yet being delivered.

Tesla is currently focusing all deliveries in the US and Canada after accumulating reservations for about 2 years.

Here’s the graph that Tesla released: 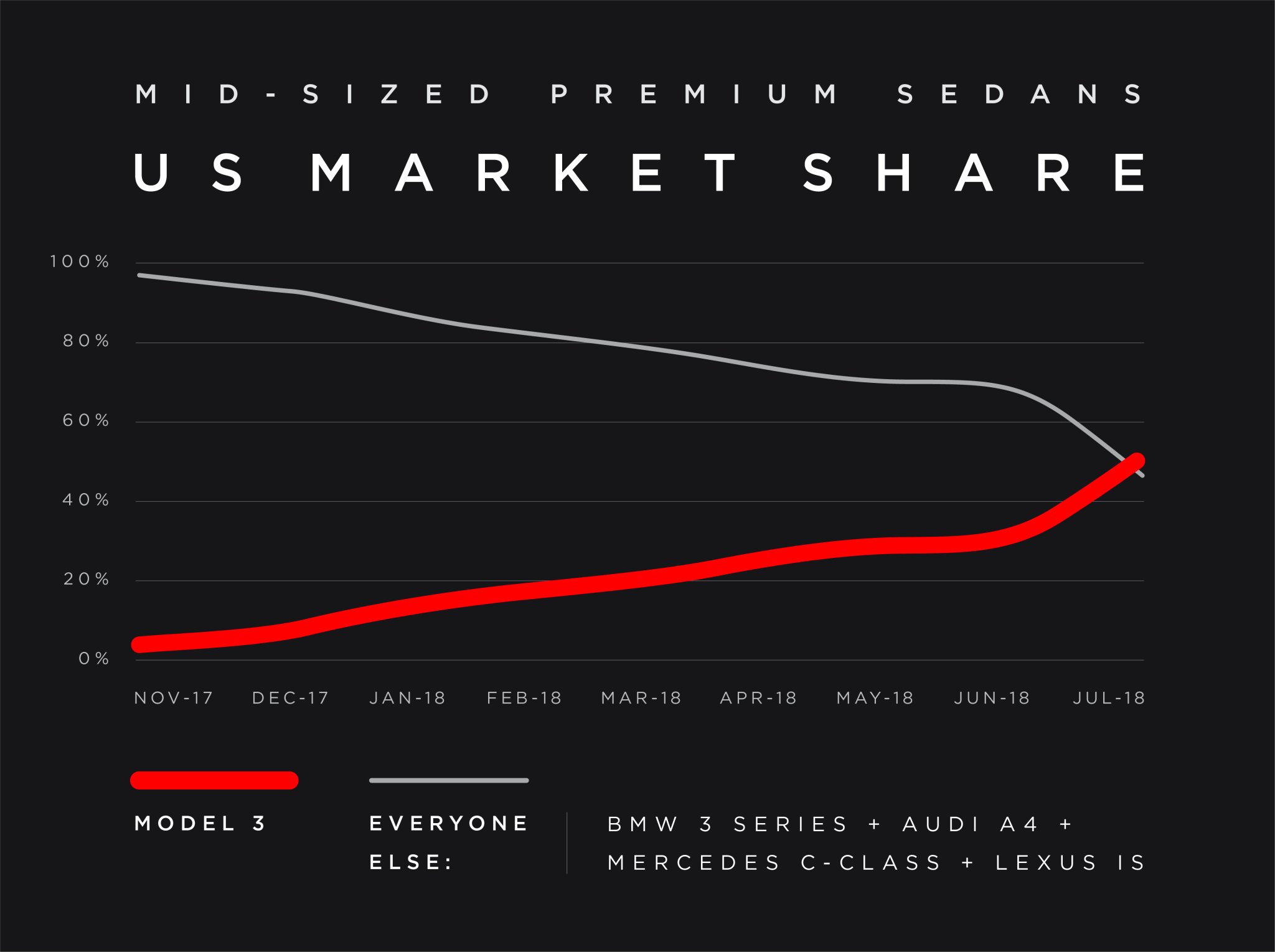 (Note: this is a graph of market share, not number of sales.  So while it looks like Model 3 is taking sales from other premium sedans at a 1-to-1 rate, that’s not the case.  This graph merely shows Model 3 sales growth as a percentage of overall premium mid-size sedan sales, not necessarily a drop in sales from other companies.  We would need another graph showing total sales of each model to address that – like the one from last quarter’s update which made it look like Model 3 is taking some sales from BMW and perhaps Mercedes, but not so much from Audi and Lexus)

Earlier today, Tesla changed up the referral program, adding the Model 3 Performance to the list of vehicles which benefit from it and signaling the end of free unlimited supercharging for orders placed after September 16th.  This led us to muse that perhaps Tesla felt the need to “pull a demand lever” to fill up the order books, with Model 3 demand possibly being lower than Tesla had hoped.

But with this quarterly update, Tesla is suggesting that demand is quite strong.  Tesla states that their ability to outsell other cars in the same segment comes from Model 3’s appeal to customers of other vehicle segments.  Based on the trade-ins that Tesla has received, they think that the addressable market doesn’t just cover premium mid-sized sedans, but customers from the non-premium sedan and hatchback segments.

(*Update: In Tesla’s Q2 earnings call, they added some detail on this – the top 5 non-Tesla vehicles Tesla has received as trade-ins on the Model 3 are the Toyota Prius, BMW 3-Series, Honda Accord and Civic, and Nissan Leaf)

Since Tesla doesn’t make cars in either of those segments yet, and the other companies do, the Model 3 tends to attract buyers who are interested in owning a Tesla but would otherwise buy a car from one of those segments.

Finally, it should be noted that the only Model 3s currently shipping are the Long Range, Premium interior versions which start at $49k.  When lower-price configurations start shipping, a commensurate increase in demand from buyers waiting for a lower-priced vehicle can be expected.

As I stated in my original Model 3 review, the Model 3 is a fantastic car.  Despite my high expectations, it managed to exceed them.

In Seth’s recent Model 3 Performance test drive, he stated that the car might be the “best car at any price.”  I too was impressed by my Performance test drive, thinking that the car has just the right amount of power – not so much to snap your neck like in the ludicrous P100D, but enough that you never want any more (though I do tend to prefer rear-wheel drive vehicles myself).

And as Fred wrote earlier today, one would be “hard pressed to find a negative review of the Model 3.”

So most people and critics seem to agree that it’s a great car, and it’s no wonder that the car is drawing in customers from outside the segment, and managing to outsell the competition.  The other cars all offer somewhat similar feature sets, whereas the Model 3 is unique among them.

That said, the ramp still continues.  Even if Tesla can manage to sell 50-55k Model 3 this quarter as they’ve predicted, this is by no means their ultimate goal for Model 3 production.  Tesla has claimed repeatedly that they intend to sell at least 500,000 Model 3s per year globally – or possibly even more, as suggested on today’s earnings call.

Further, Tesla will eventually be expanding into other segments, such as the premium small crossover segment with the upcoming Model Y.  It’s possible that some demand will shift from Model 3 to Model Y once that car is released – but many said that about the Model X, and it hasn’t really cannibalized Model S sales since its introduction.  Demand still seems strong for the S and X both, with Tesla claiming that Q2 2018 had the highest amount of combined S and X orders in the company’s history.

Do you think that Tesla’s lead in the premium mid-sized sedan segment is sustainable?  Let us know in the comments.