Despite its limited availability due to production constraints, Tesla’s Model 3 is already the best selling electric vehicle in the US by a significant margin.

Now Tesla claims that Model 3 is also about to become the best-selling mid-size premium sedan in the US – beating gas-powered cars too.

The Model 3 wasn’t expected to rise to the top so fast due to its limited options at the beginning and the difficult production ramp, but Tesla predicts that Model 3 is “already on the cusp of becoming the best-selling mid-sized premium sedan in the US” in its Q1 2018 shareholders’ letter released today.

Tesla produced this chart of the market share in the segment over the last 6 months (roughly since the start of Model 3 production): 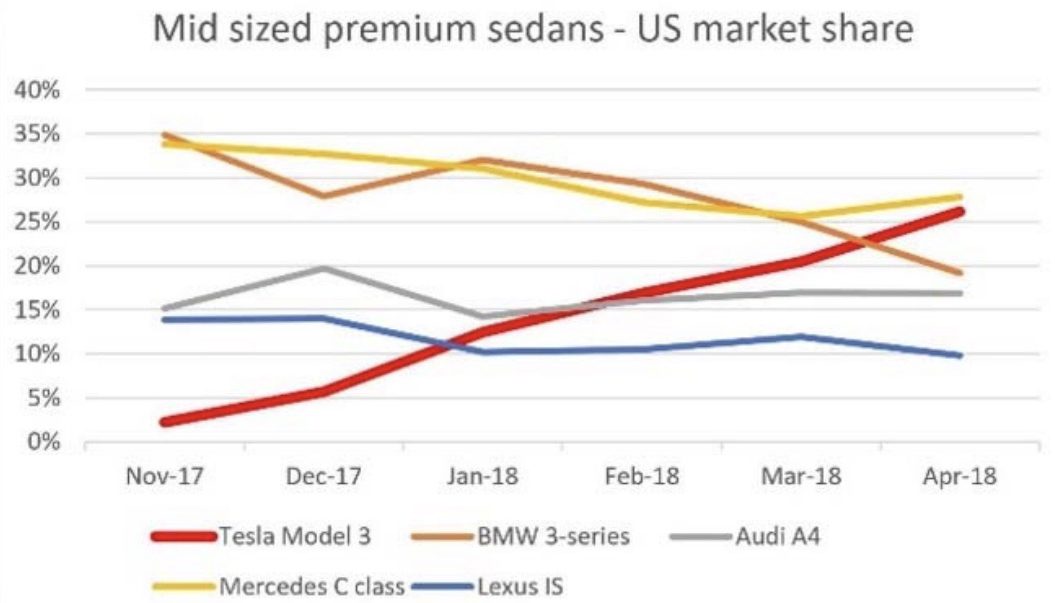 Now looking at the segment over 6 months is not ideal, but it’s the best we have now since Tesla only started Model 3 production in a significant way over the period.

BMW appears to be the most affected in the market, which is interesting since a not-so-scientific poll showed that the BMW 3 Series was the most popular car that Model 3 reservation holders were replacing.

In an investment thesis, Facebook millionaire turned venture capitalist Chamath Palihapitiya also predicted that BMW’s 3 Series will be the vehicle most impacted by Tesla’s Model 3.

While Tesla had a short Model 3 production shutdown in April and expects to be down up to 10 days during the quarter, the automaker expects production to increase significantly in the coming months, which makes the prediction that Model 3 will surpass competitors very likely to happen as long as production doesn’t fail them.

Most of the vehicles are expected to still go to Model 3 reservation holders in the U.S., but the company is also expected to divert some of the production capacity to Canada over the next few weeks, which could impact its market share in the US.

In the shareholders’ letter, Tesla also claimed that Model 3 net reservations, including configured orders that had not yet
been delivered, “continued to exceed 450,000” at the end of last quarter.

At that point, the company had already delivered over 10,000 Model 3 vehicles and it confirmed that it received some cancellation “almost entirely due to delays in production in general and delays in availability of certain planned options, particularly dual motor AWD and the smaller battery pack.”

Those new options are still expected to come after Tesla reaches a production rate of 5,000 units per week at the end of the second quarter.