The concepts keep coming out of the Geneva Auto Show this week, with Porsche unveiling a new one this morning – a fully electric sport crossover SUV adaptation of their not-yet-released Mission E.

The headline specs?  Porsche claims that the car will have 600 horsepower, do 0-60 in under 3.5 seconds, go more than 500km/310 miles on a charge, and charge at a rate of 400km/250 miles in 15 minutes.  Like many European announcements, though, these range numbers are based on the NEDC rating system, which is significantly more lenient than EPA numbers – the range would probably be something closer to 240-260 by EPA testing.

As a Porsche, it’s got to have some good performance numbers, and the ones given are certainly impressive.  Similar to last week’s announcement about the Mission E, Porsche claims the CUV will do “multiple accelerations in direct succession without loss of performance,” which they claim to be “unmatched by any other electric vehicle.”  We will leave it as an exercise to the reader to decide who Porsche is talking about with that statement.

The car also has all-wheel steering and Porsche’s electrohydraulic Dynamic Chassis Control anti-roll system to actively stabilize the car when cornering or on uneven surfaces.

As for size, the Mission E Cross Turismo is 4.95 meters/194 inches in length, which is longer than a Porsche Cayenne or Mercedes GLC/GLE but 4 inches shorter than a Model X, which puts it on the large side of the CUV category in terms of length.

That said, it is notably quite a lot shorter in height than all of these cars – most of them are in the mid-60s to 70 inches tall, and the Mission E CUV is a mere 56 inches tall.  This actually puts it at around the same height as a Model 3, or even as a Porsche Panamera – and from the front view, the casual observer would be forgiven for mistaking it as the latter: 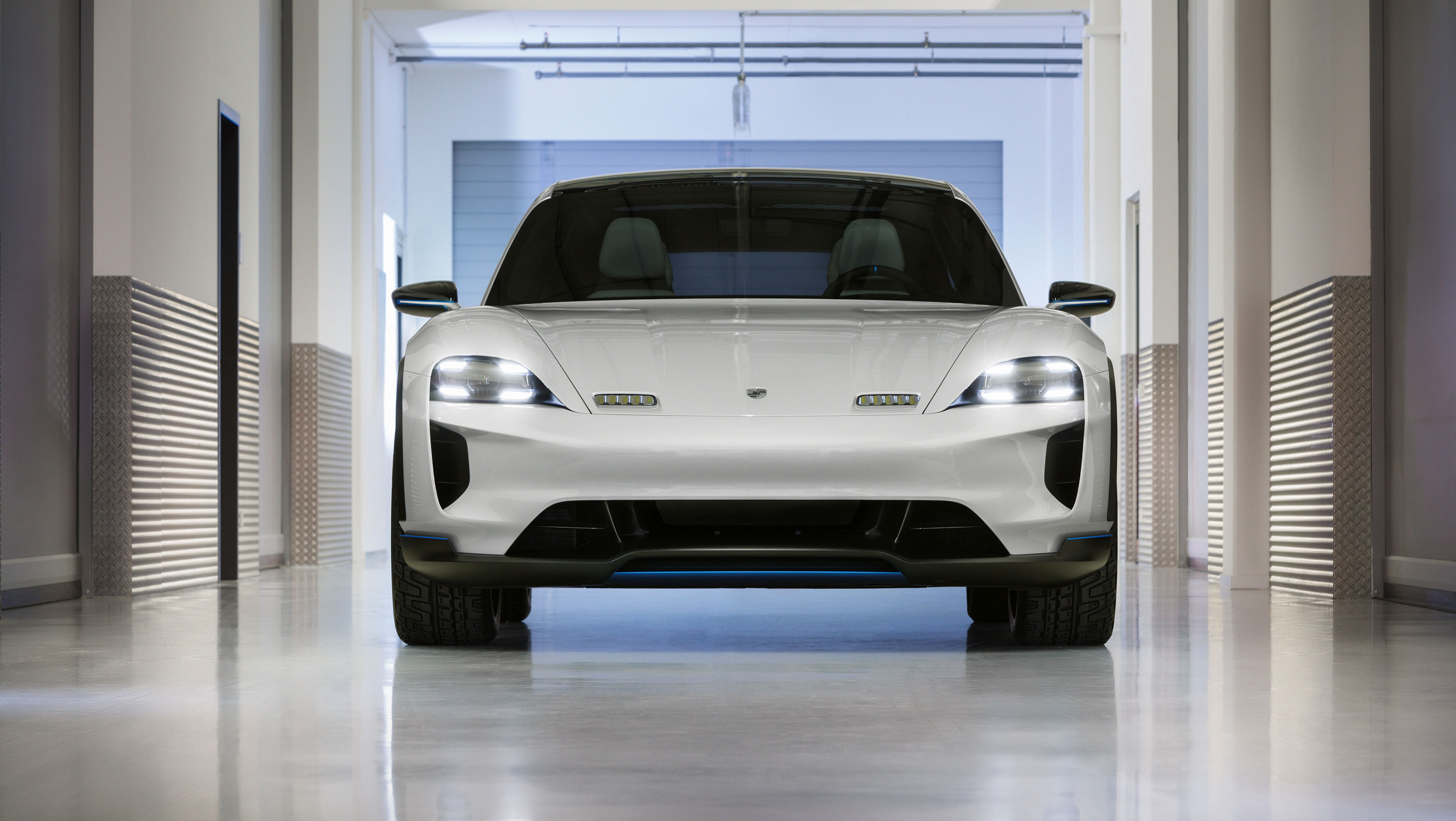 Porsche bills the CUV as a multi-purpose vehicle, with good ground clearance (which can be increased by up to 50mm/2 inches via adaptive air suspension) for possible off-roading and flexible cargo capacity for sports equipment like surfboards or e-bikes.  It will be interesting to see how they achieve all that in a height that’s similar to a sedan, rather than an SUV/CUV.

The seats fold down for loading long equipment, but the cargo deck seems fairly high from the press photos Porsche provided (shown below) – so skis and surfboards are a go, but between the high cargo deck and low roof, it might be tough to load anything tall (tall potted plants, or the like) into the available space.  Porsche does provide a rail system and adjustable and removable straps in the rear cargo area to help secure items.

The cargo deck seems quite high compared to the seats

It uses the same 800-volt charging system which Porsche has promised for the Mission E, which should offer very fast charging, up to 350kW, more than double what Tesla’s superchargers are currently capable of.  This translates to 400km/250 miles of range added in just 15 minutes, but again this is based on NEDC numbers, so probably more like 200 miles in 15 minutes when normalized to EPA numbers.  Still, quite impressive.

Of course, none of these stations have anything to connect to yet, and Tesla has promised faster supercharging in response, so hopefully this arms race can happen and all of us will benefit.  The car will also be capable of inductive charging, though not at the ultra-fast 350kW DC rate. 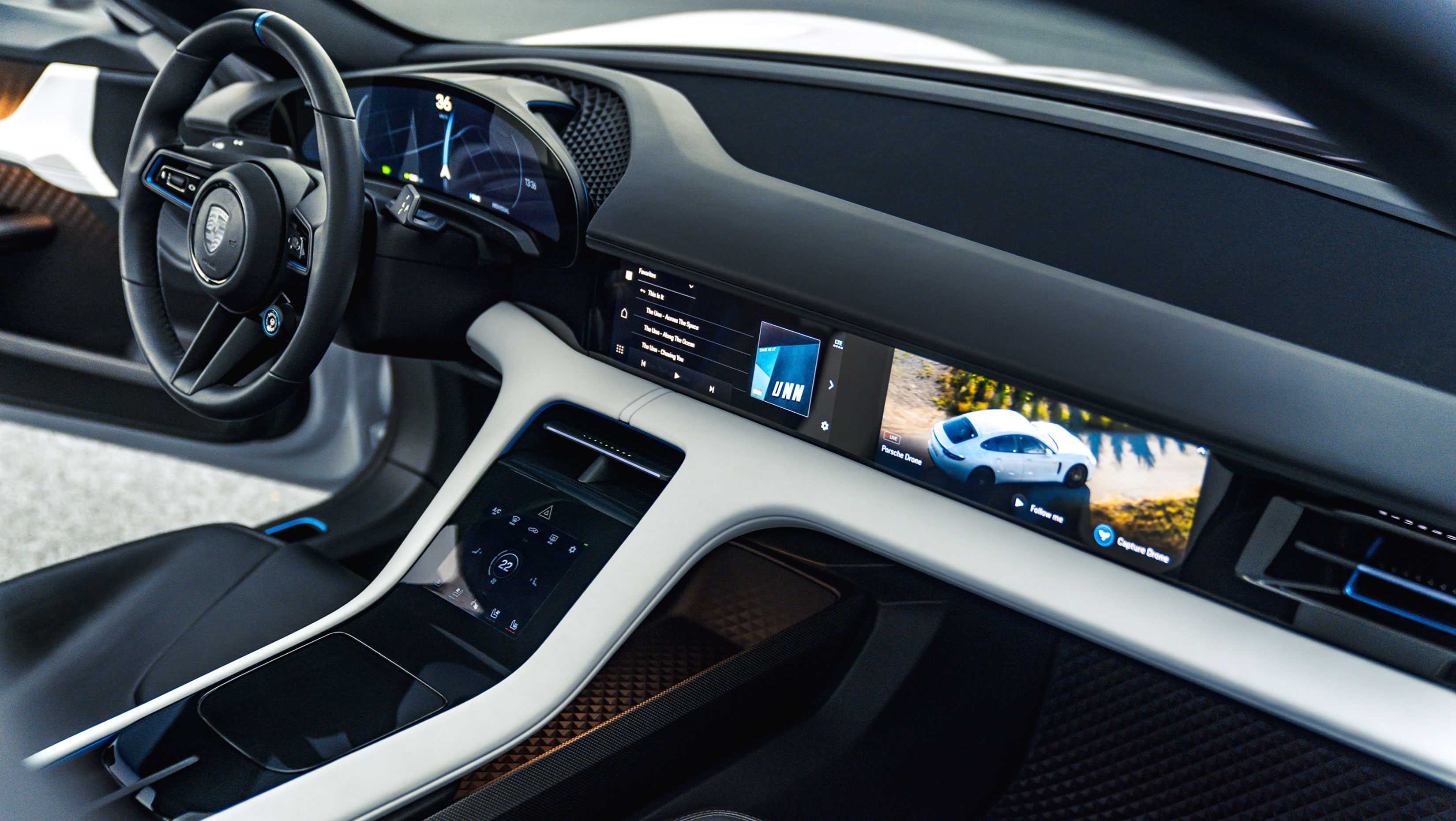 Finally, as a concept car, it has to have a few strange features attached.  Porsche states that the car has “eye tracking control” which can sense where the driver is looking to help bring certain parts of the vehicle’s infotainment system into focus, which are then controlled by smart touch controls on the steering wheel.  Sounds a little unnecessary compared to having a static display and knowing where to glance to find the things you need, but hey, concepts are all about experimentation.

The eye-tracking feature also applies to passengers for various apps (media, navigation, air conditioning and contact lists are given as examples), where it seems like it might be more useful, but still just as unnecessary (though not nearly as silly as the FF91’s “scent customization through facial recognition” technology).

As I often say, “you can’t drive a press release.”  Porsche’s specs here are quite impressive, but it, like every other BEV Porsche has announced so far, is just a concept (same goes for every BEV VW Group as a whole has ever announced except for one, the e-Golf).  You can’t buy it anywhere, we don’t know the price, and we can’t be certain when it will come out – Porsche did not set a production target in today’s announcement.

So these concepts must always be taken with a grain of salt, especially given the graveyard of cancelled EV projects that is the German auto industry.

Nevertheless, it does seem like they might be serious this time, or at least more serious than they have been in the past (especially since, well, they have to).  And this concept looks good, both aesthetically and from a specification standpoint, and not unrealistic either.  The numbers are impressive, but not outlandish, and same goes for the features (except, perhaps, for that eye-tracking thing).

There are a few bits which are obviously still just there for the sake of being a concept car – the seats look too weird to make it to production or pass safety testing, and the glass roof will probably lose the cross-hatch design (the I-Pace concept had a similar design which was nixed before production).

Speaking of the I-Pace, the Porsche seems to be targeted at almost the exact same market that the I-Pace is, with similar size, design and specs.  But Porsche has just released this concept to the world for the first time today, when at the same show, just days ago, Jaguar unveiled the final production version of their concept, which they’re already taking orders for and supposedly ships soon™.

So even stodgy old Jaguar has jumped ahead of VW Group in the EV game, even though VW has been showing concepts since last decade.  Please, get to work VW.  Keep it up with the concepts, that’s all fine and dandy, but let’s see some cars on the road too.