China’s demand for SUVs and electric vehicles keep increasing, which made Tesla’s Model X a very popular vehicle in the country despite its higher price due to import duties slapped on all of Tesla’s vehicles.

Now NIO, one of the most well-funded new Chinese EV startups, launched their first production vehicle this week, the NIO ES8, a cheaper all-electric SUV to try to capture the market.

The company first unveiled the vehicle in April, but yesterday they launched it at a massive event in Beijing where they flew thousands of reservation holders to see the vehicle in person.

While NIO presents itself as a “global automaker” with operations in California and London, the company is primarily backed by Chinese interests and their first manufacturing capacity will be in China.

Earlier this year, they raised ‘up to $600 million’ in their latest funding round led by Baidu to bring the ES8 to production.

So far, the specs are fairly similar to what you will find in a Model X, albeit with slightly lower performance, but where NIO differentiate itself the most is with the price and ownership model.

But the price of those “Founder Edition” vehicles don’t matter much since NIO claims that they are already all sold out.

But NIO also offers a battery renting structure, similar to Renault’s ZOE battery scheme, which lowers the upfront price of the vehicle to RMB 275,400 (~$42,000 USD).

The battery renting costs RMB 1,280 (~$2o0 USD) per month, but it also gives owner access to a battery swap system to get more range quicker.

Similar to Tesla’s battery swap system that they seemingly abandoned, NIO is building battery swap stations, which they claim can autonomously replace a battery pack on the ES8 in about 3 minutes.

They are also planning to offer mobile charging with vans equipped with battery packs and onboard chargers. 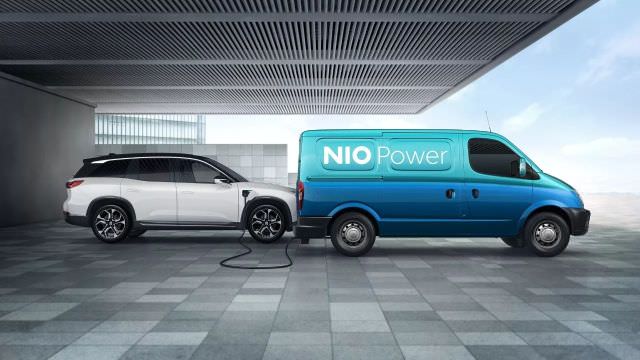 They claim that those “NIO Power” vans, which they plan to have 1,200 units over the same timeline, can add 100 km of range in about 10 minutes.

Finally, ES8 is also equipped a number of intelligent features powered by an onboard AI assistant system called NOMI:

Here’s the stream of the event from last night:

I think that’s a brilliant first entry in the market for NIO (not counting the NIO EP9, a 1 MW supercar with 265 miles range & top speed of 194 mph).

Currently, demand for both SUVs and EVs are surging in China and there weren’t many options in the middle of the market between BYD and Tesla. I think the ES8 will fill that hole.