We don’t hear a lot about Tesla’s battery swap program anymore. We are told that it is still alive, but on the back-burner as Tesla’s EV infrastructure team is focusing on accelerating the rollout of Supercharger stations ahead of the Model 3 coming to market next year.

The use case for regular Tesla owners is not really attractive versus the Supercharger, but battery swap could make a comeback with special stations for ‘Tesla Semi’ or private stations to accommodate large commercial fleets of Tesla vehicles. Tesla recently hired Audi’s NA commercial account manager to lead a new B2B push for Tesla in “fleet management, rental, government/public sectors & corporate enterprises.”

Tesla could be looking to have a more important presence in commercial fleets and battery swap makes more sense when it’s important that your vehicles stay on the road. Same goes for freight with the upcoming ‘Tesla Semi‘.

In the meantime, we now get a new look at Tesla’s battery swapping magic through newly released technical drawings from a patent application.

Tesla filed for a patent called ‘Battery Swapping System and Techniques’ back in 2014, but the application was only released earlier this year and now the technical drawings attached to the application are finally available.

It gives us a rare and detailed look at the technology behind (or under) Tesla’s battery swap station.

When the automaker first unveiled the concept, it demonstrated that it could replace a battery pack automatically in less than 90 seconds, but when the pilot station actually went into operation, the time increased significantly.

The process can take up to 15 minutes and is not completely automated anymore. They inspect the vehicle during the first time a swap is performed, after that, subsequent swaps shouldn’t take more than 5 minutes – but still a lot more than when first announced.

The fact that Tesla added a titanium armor plate under the car to further protect the battery pack might have something to do with that – especially when you look at the drawings of the system:

The first image shows the platform with a ‘battery pack lift system’ underneath and several other systems to hold and move the battery packs.

The system lifts the vehicle and raises the datum pins and nutrunners to align with the battery pack.

The system can then take out the battery pack and lower it to move it along underneath the platform in order to store and charge it.

Now it can reverse the process in order to place a new fully charge battery pack inside the Model S.

Here’s a diagram of the whole process: 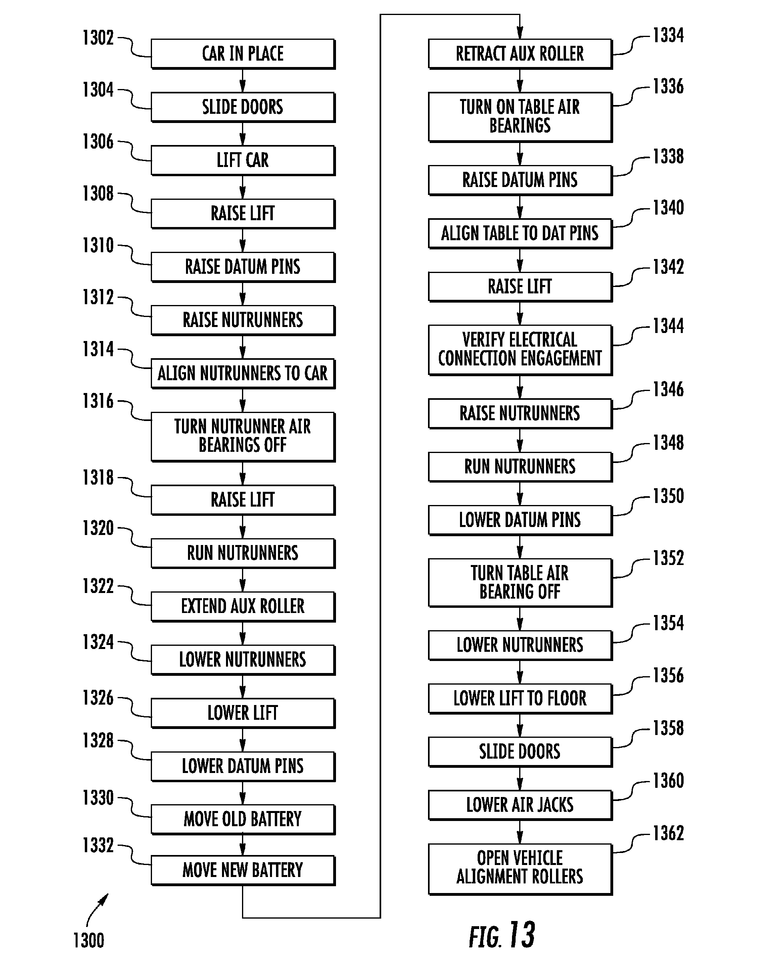 The concept is quite fascinating really, but as previously mentioned, we have yet to see a useful enough use case for any kind of important deployment on what as to be quite an expensive facility.

Redditor DirtyFries stopped by the Harris Ranch Battery Swap pilot station earlier this year and shared a few picture with us (reprinted with permission):