A stash of Model 3s with VINs as high as #1096 has been spotted in a parking garage in Playa Vista, California, just minutes away from the Tesla Design Center in Hawthorne, where the Tesla Semi reveal event will take place tomorrow night – but more importantly very close to Tesla’s new Marina Del Rey property, which looks like it will be a massive store + delivery hub.

There are at least 19 Model 3s in the photos we’ve seen, along with several Model S and X (~50), and 3 Tesla Service vans (though these aren’t electric – they’re Ford Transit Connects).

Last month we learned that Tesla had registered VINs up to #2136, even though Tesla’s quarterly report stated that they only produced a total of 260 Model 3s during the third quarter (ending Sept 31).  But so far, #1096 from today is the highest VIN number which anyone has spotted in the wild (#1086 is also among the VINs in the same garage).  That said, these cars are obviously not in customer hands yet, so they’re not quite “in the wild,” but close enough.

The location of the parking garage is of note, as it is close to both the Tesla Design Center in Hawthorne (~20 mins away) and Tesla’s new property in Marina Del Rey (~5 mins).  We reported on the Marina Del Rey property last month, which is conveniently located near the 405, the 90 and Pacific Coast Highway, and has a lot of square footage available.  Our guess was that the property will be used as a delivery hub for Model 3 – something like the “store + delivery” concept which Tesla has been putting into place lately.  Tesla has recently put up job postings for “customer experience specialist” for the new location, which seem to confirm this store + delivery angle.

Here’s a street view photo of the parking garage (which is a new construction, as it doesn’t show up on Google satellite view) alongside a map showing how close it is to Tesla’s new property: 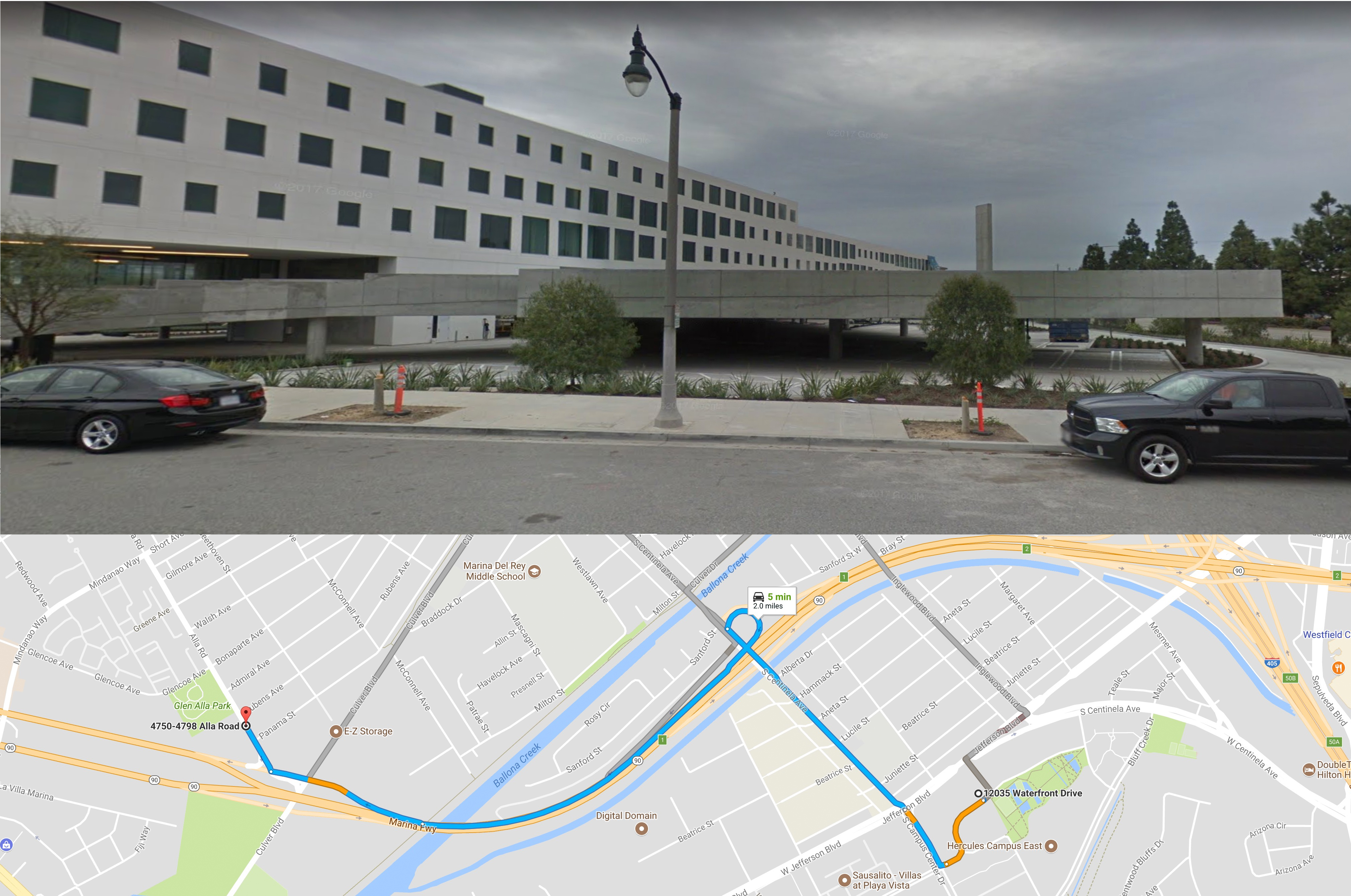 These Model 3s could just be here being staged for tomorrow’s semi truck reveal event.  Tesla has test rides at many of their events, and it’s unlikely that they’ll be treating members of the public and media to test rides in a semi truck, but seems more likely that the Model 3 would be used in that capacity.  With a lot of people in attendance, it would be reasonable for Tesla to have as many spare Model 3s as they can manage on deck for the event.  One would think they’d be parked at the Design Center, but given parking limitations there and at neighboring SpaceX, maybe Tesla just needed to find some off-site parking for the moment.

But at least one Model X has an actual California license plate on it, and one photo shows that the Model 3s have no front or rear plates – no dealer or manufacturer plates (typical for cars used in test drives, show floors or marketing purposes) and no standard California license plate.  If these were cars Tesla has dedicated to the marketing division, they would typically have MFG plates on them, but instead they have none.  Could these cars be destined to eventually fall into customer (or employee customer) hands, possibly after being shown off at the semi event tomorrow night?

It seems likely that these aren’t just around for the reveal event, but are in fact cars which will eventually fall into the hands of customers.  At least two of the cars had delivery inspection notes on them, taped to the front windshield, and at least one car has a Monroney label with configuration listed.

These inspection labels may look concerning, but many cars have issues which get corrected on final inspection, especially if they’re early models.  For example, both notes mention small paint defects, which are not uncommon or difficult to correct.

Here are two short videos taken in the garage by reddit user SupaZT, in which various VIN numbers are visible (ranging from #344 to #1096).  Considering some of the cars have moved between the time the photos were taken and the time the video was taken, this staging area does seem active – maybe these cars are already being delivered or given their final repairs somewhere locally (perhaps Tesla’s Culver City service center, which is just down the street on Centinela Ave).  If this nondescript parking garage is being used so actively by Tesla as a place to stage Model 3s, we can only imagine what it will look like when they have 131,000 square feet of store + office space available to deliver cars to one of the biggest local EV markets in the world.