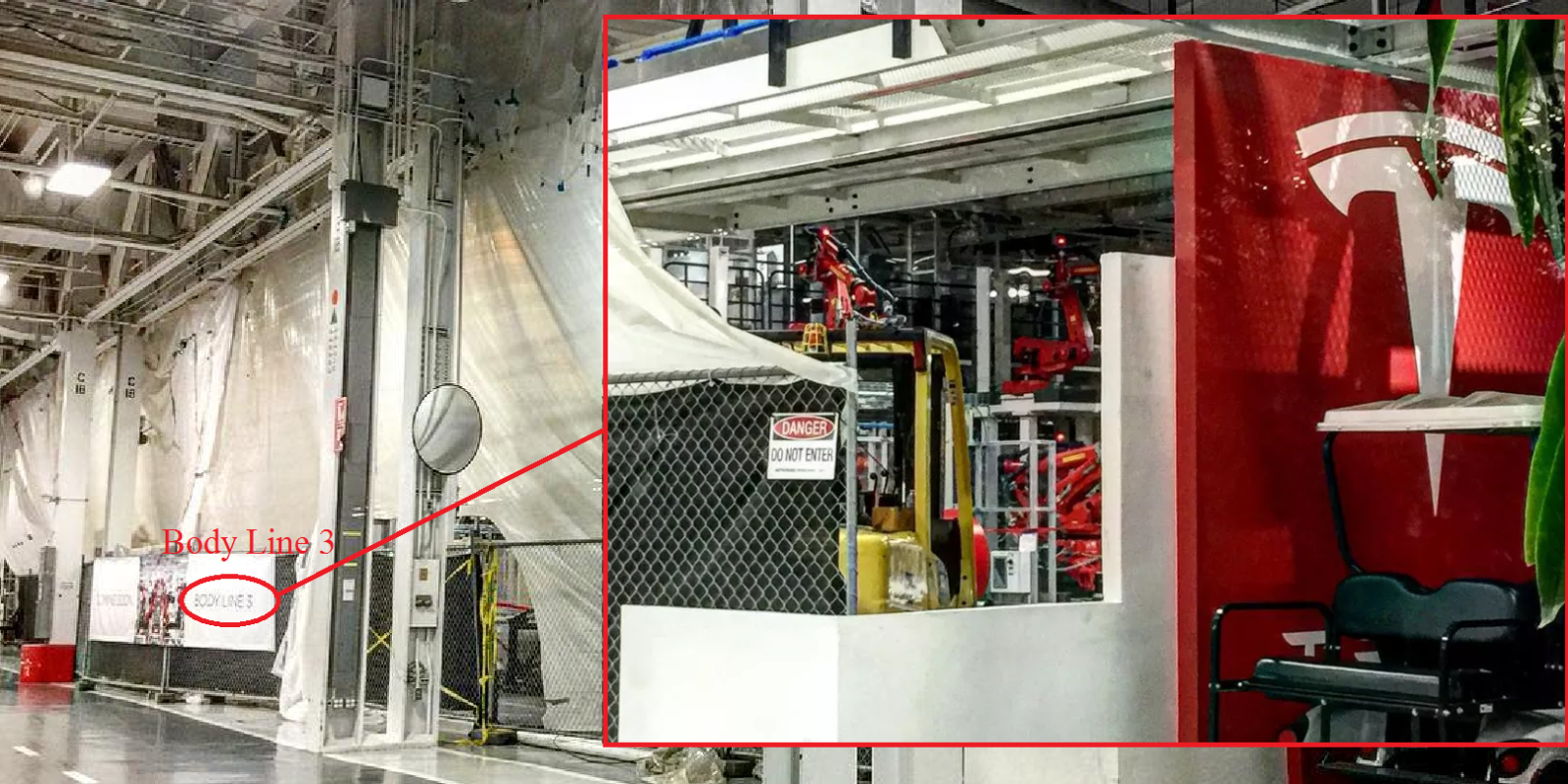 The very first production Tesla Model 3 is supposed to come off the production line today, according to CEO Elon Musk.

As we wait for an update on the progress, we get a very rare (and small) peek inside Tesla’s secretive Model 3 production line.

Earlier this year, we reported on new building permits for production line under construction at Tesla’s factory in Fremont.

Several of the permits had to do with the production of the Model 3 –  making reference to the ‘body line 3’, Tesla’s latest production line – with ‘1’ and ‘2’ currently being used for Model S and Model X. Here are a few examples:

In recent tours of the factory, the section was completely covered with tarps – not that it would have mattered much anyway since pictures weren’t allowed.

But today, a reader pointed us to two pictures of the ‘body line 3’ posted to Instagram by Chris Suen, who managed to photograph a glimpse inside the section of the factory:

We can also see the platform structure to accommodate two levels of robots working on the line. That’s something that we got a glimpse of with leaked pictures of Tesla taking delivery of a massive shipment of robots for the Model 3 production line:

At the time, the robots were not installed on top, but now we can see that the Kuka robots have been installed on the second platform.

What we are seeing is the very first steps to create what Musk has been referring to as “alien dreadnought”, which is his goal for the factory to look more “alien” than a factory.

Musk emphasized that the first version of the Model 3 production line will only be a “version 0.5” of the “alien dreadnought”, but the line will get updated with more automation and he envisions a “version 3” in a few more years:

“By version 3, it won’t look like anything else. You can’t have people in the production line itself, otherwise you drop to people speed. So there will be no people in production process itself. People will maintain the machines, upgrade them, and deal with anomalies.”

The CEO has been focused on the speed of production over the past year. He says that Model S and X production move at about five centimeters per second on the line, but he sees an opportunity for a 20-fold increase in production speed for the Model 3 in Fremont – or “at least one meter per second.”

After updating the timeline for the Model 3 ramp up earlier this week, Musk expects it to start relatively slowly for the first few months, but he still aims for ~5,000 cars per week by the end of the year. That’s about a 100% increase over Tesla’s current production capacity – and just for Model 3.