Tesla has already been offering energy storage services to electric utilities with the Powerpack – like its 80 MWh Powerpack station with Southern California Edison.

But now, the company announces that it will be bundling its residential energy storage product, the Powerwall, with the Powerpack to create “a single resource of shared energy.”

It’s a service that has been popular in Germany with other energy storage suppliers where electric utilities not only employ large-scale energy storage, like the Powerpack, but also a lot of smaller residential installations which they can access to control the load.

Tesla has two case studies of Powerwall aggregation projects that they did ahead of officially introducing the service today.

They are installing over 100 Powerwalls with Pacific Gas & Electric in homes in San Jose. When combined with smart-grid inverters, the installation give PG&E access to 330 kW/640 kWh, which they can use for “voltage and reactive power support and dynamic capacity”.

A similar project is underway with Southern California Edison in Santa Ana, where they are installing 50 Powerwall 2 in homes for 250 kW/675 kWh of capacity.

The announcement of the new service today includes a partnership between Tesla and Green Mountain Power, a utility in Vermont. This project will not only aggregate Powerwalls, like the previous ones, but it will also combine them with energy capacity from Powerpack projects.

Green Mountain Power will install Powerpacks on utility land and deploy up to 2,000 Powerwall batteries to homeowners within the utility’s service territory. The homeowners who will receive a Powerwall will be able to use it for backup power for “$15 a month or a $1,500 one-time fee” and Green Mountain Power will be able to access the energy in the pack to support its grid.

Tesla listed the new grid services on its website: 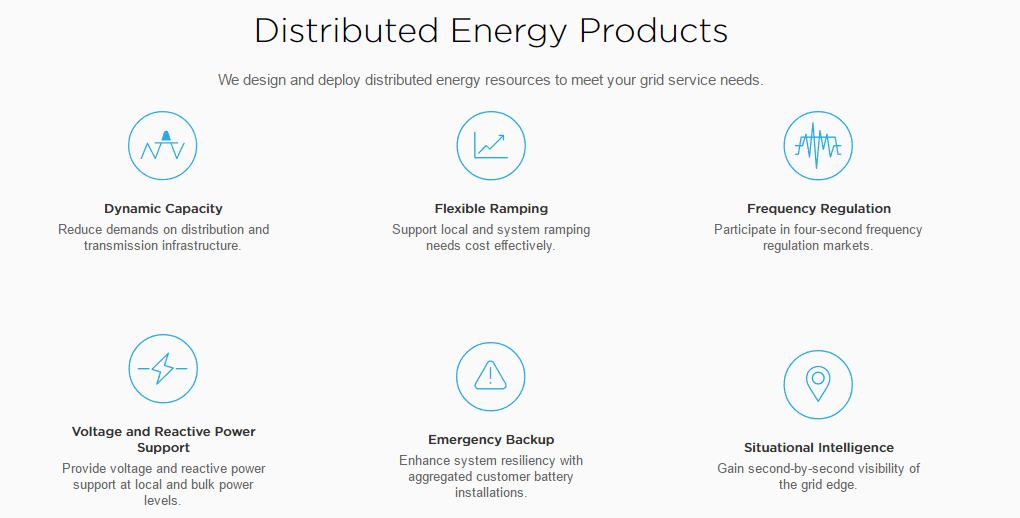 The Next Step in Energy Storage: Aggregation

Today, modern utilities and grid operators are utilizing battery technology like never before. The next step in tapping the potential of energy storage is putting together thousands of batteries to form an energy network that utilities can use to deliver immediate value for the electric system. Tesla can now bundle Powerwall and Powerpack batteries into a single portfolio, also called aggregation, to make the grid cleaner and more efficient. Meanwhile, Powerwall customers who allow Tesla and the utilities to use their battery when energy demand is highest will not only have home backup power, but will also receive compensation for its use on the grid.

To introduce this program, Tesla and Green Mountain Power, a utility in Vermont, are working together to bundle Powerwall and Powerpack batteries into a single resource of shared energy for the first time. Green Mountain Power will install Powerpacks on utility land and deploy up to 2,000 Powerwall batteries to homeowners within the utility’s service territory, which will enable more renewable energy and increase grid efficiency. For only $15 a month or a $1,500 one-time fee, customers will receive backup power to their home for the next 10 years, eliminating the need for traditional, manually-controlled backup generators that use fossil fuel. At the same time, Tesla and Green Mountain Power will provide a variety of grid services using the network of installed Powerwall batteries, delivering dynamic capacity (energy reserves that can be dispatched when they are needed most) and additional grid stability, while sustainably lowering costs for all utility customers. Tesla will also work with Green Mountain Power to dispatch the aggregated resource into New England’s wholesale electricity markets, producing additional savings for customers in the region.

The Green Mountain Power program is just the beginning. Tesla is working with energy retailers, grid operators, utilities and aggregators across the globe to unlock the ability for Tesla batteries to deliver grid services while providing reliable power at all times of day. As the deployment of Tesla batteries continues to accelerate, we can scale the adoption of renewable energy, cost-effectively modernize our aging infrastructure, and improve the resilience of our electric grid to benefit everyone.

To find out more about how to aggregate Tesla batteries to strengthen the electric grid and accelerate the transition to sustainable energy, visit tesla.com/utilities.