Launch control, an electronic aid to assist drivers in accelerating from a standstill, has been known to sometimes have a negative effect on vehicles if used too often. It can result in premature wear of components due to the high stress placed on them. Some performance car manufacturers either limit the power after a predetermined number of launches, or they void the warranty after a certain limit.

Earlier this year, Tesla introduced its own version of launch control, ‘Launch Mode’, for the performance versions of its vehicles – a first in a production electric car. Now we learn that Tesla is limiting its own launch mode in a similar way, which is something owners were widely unaware of, and some may find their power output permanently limited due to the situation.

As we reported earlier this year, Tesla quietly increased the total power output of its performance vehicles. It added over 50 hp of power to the Model S P90D–Tesla’s top performance model at the time–with Ludicrous mode, and increased the battery pack capacity to 1,600 amps.

Last week, Tesla owners on the Tesla Motors Club forum started a thread discussing a rumor that Tesla could be limiting the power output after an unspecified number of launches using ‘Launch Mode’.

The thread was started by a well-known TMC contributor, Ingineer, who is known for having root access to his Model S. He started a thread confirming what we learned last week about the real usable capacity of Tesla’s battery packs revealed by another hacker with root access to his vehicle, but he then changed the subject to the launch mode issue.

After having quite a few owners worry about the situation, a Tesla Model S P90D owner claiming to be affected by the exact situation added to the discussion:

“Unfortunately I’m here to say this is true. My car was limited just after the 8.0 update and at first I was convinced it was related to that. I did lots of testing and emailed Tesla my findings. Before this limitation my car would pull around 1600 amps from the battery and 512 KW of power when fully charged, now the car will only pull around 1500 amps and 480 KW of power, a loss of about 40 HP on a 4 month old car.”

He then shared the response he received from a Tesla representative:

“Thank you for your time. To recap our conversation, using launch mode places an increased stress on the entire powertrain accelerating aging and fatigue of various components. The computer systems automatically track launch mode usage and continually estimate fatigue damage. Depending on how launch mode is used, the computer may eventually limit the available power during launch mode to protect the powertrain. Note that this is a common strategy also employed in other high performance cars. As discussed, upgrading to the P100D ludicrous will remove this limit and will not be limited in the future as the P100D does not have this limit for launch mode.”

We reached out to Tesla to confirm if they are indeed limiting the output and a Tesla spokesperson sent us the following statement:

“Like other automakers, our performance vehicles continually monitor the condition of various components and may employ limiting strategies to reduce fatigue on the powertrain.”

It’s understandable since, as previously mentioned, it’s nothing new when it comes to launch control systems for performance vehicles – the Tesla Model S P90D in Ludicrous mode can accelerate from 0 to 60 mph in 2.6 seconds and has over 500 hp. The problem is that there apparently wasn’t any communication about the limitation with owners. They could be using their vehicles as intended and wake up one day with a limited power output.

Tesla’s owner manual contains a page about Launch Mode, but it doesn’t make any mention of limitations on the number of launches – only something about the temperature when using the feature: 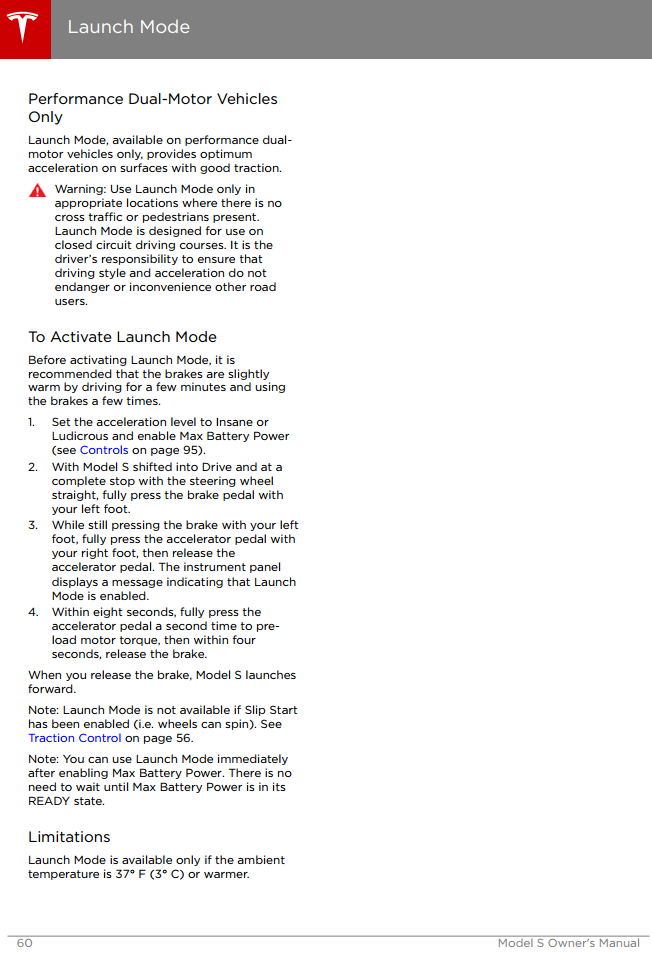 It’s not the first communication misstep the company has made when it comes to power output. Last year, Tesla CTO JB Straubel had to write a blog post clarifying the way the company was calculating its power output on dual motor vehicles after complaints from owners. Yet, Tesla owners remain largely loyal to the company, as shown in a new survey released just yesterday claiming that 91% of Tesla owners would buy again.

As for this power limiting issue, a source familiar with the problem told Electrek that the company is working on better communicating the situation to its owners. It appears to only affect P90D vehicles (at least the affect was only reported on P90Ds but other dual motors could have a launch counter) and the solution is apparently an expensive upgrade to a 100 kWh battery pack, which is coming next year, since Tesla’s latest top-of-the-line P100D model is apparently not affected by the problem.

Update: Tesla added a mention on its order page about “limiting controls”:

If you are interested in solar, we suggest you get quotes from more than one installer to make sure you get the best energy solution for your house or business. UnderstandSolar is a great free service to link you to top-rated solar installers in your region for personalized solar estimates for free.