The issues mostly revolved around defining electric power in terms of horsepower and the power output being dependent on the state of charge of the battery pack feeding the car’s two electric motors. The issues have been mostly resolved after Tesla updated its advertised numbers, but since the introduction of the Model X and the ‘Ludicrous mode’, things have been more complicated again…

Last year, Tesla introduced the ‘Ludicrous mode’, which is an upgrade on top of the performance versions of Tesla’s vehicles (Model S P90D, P85D and the Model X P90D). The upgrade consists of two improvements to the electronics of the battery pack. The first improvement is the replacement of a standard fuse to an “advanced smart fuse” which enables the monitoring of current to the millisecond, and makes it possible to cut the power with “extreme precision”.

For the second improvement, Tesla replaced the main pack contactor to use Inconel instead of steel. Inconel is a space-grade superalloy well suited for extreme high-temperature environments. This superalloy is primarily use in the aerospace industry, and one of its more famous use is in the novel manufacturing process of SpaceX’s SuperDraco engine.

The two improvements combined allow Tesla to increase the max power output of the Model S’ battery pack from 1300 to 1500 Amps, which enables higher performance. Tesla writes on the Ludicrous upgrade listing for the Model S:

“Upgrade the level of performance in your existing P90D from “INSANE” to “LUDICROUS”! This upgrade will decrease 0-60 mph time by 10% to 2.8 seconds with a quarter mile time of 10.9 seconds. The time to 155 mph is now 20% faster than a standard Model S Performance.”

The upgrade is also available for the Model X enabling acceleration from “0-60 mph in 3.2 seconds and deliver a quarter mile time of 11.7 seconds”, according to Tesla.

The Model X weighs about 600 lbs more than the Model S and Tesla advertises the same powertrain for both vehicles with identical horsepower and torque ratings – 532 hp (~397 kW) motor power (Ludicrous).

Yet while people have been able to replicate the Model X P90D’s performance on Ludicrous mode, the experience has been more difficult with the Model S P90D.

Even more interestingly, the Model X has been outperforming the Model S’s rated power output under max state of charge. While some people have reported power outputs upward of 490 kW with the top of the line Model X, the Model S P90D rarely break the ~450 kW mark – until now…

The most recent Model S P90D with Ludicrous mode are reportedly achieving way higher outputs. Here’s an example of the logs of a 0 to 60 mph launch by a relatively new (March 2016) Model S P90D owner shared on TMC:

We contacted Tesla to know what could have prompted the new output for the Model S and a company representative couldn’t confirm a change, but the spokesperson reaffirmed that both the Model S and X have identical horsepower and torque ratings.

Indeed they do, but only as of this week apparently.

A good example comes from the folks at Drag Times who own both an early Model S P90D with the Ludicrous update and a Model X P90D. They plotted the power output of the SUV and sedan: 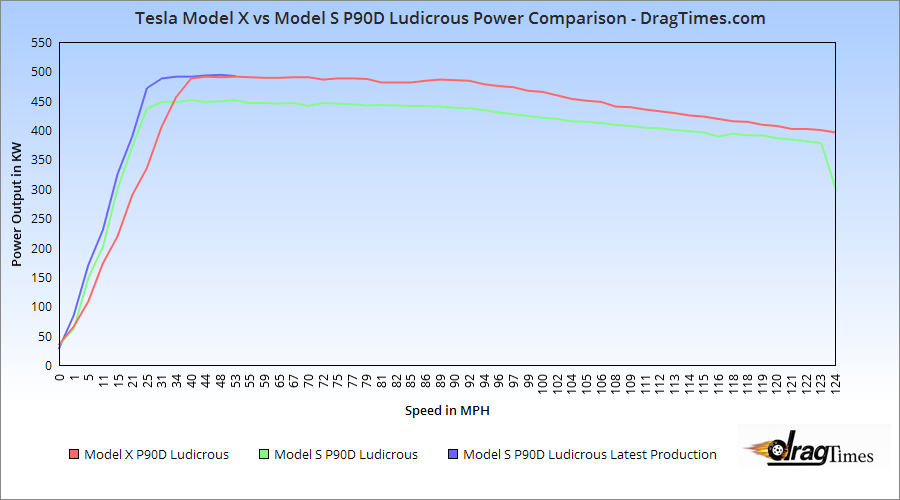 They added the data points from the latest Model S P90D and it clearly shows that only now the sedan is catching up to the Model X in term of power output. While it was rated with the same output the Model S wasn’t coming close to the X. Where is it coming from?

One theory, which is sure to come up again, is the highly anticipated P100D. A new top of the line Model S with a 100 kWh battery, which has been rumored ever since a hacker found referenced to the vehicle in Tesla’s Model S software back in  March.

A bigger battery pack could allow for a higher power output and Tesla has been known to sell vehicles with bigger battery packs than advertised. Only recently, the company started selling the Model S 60, which is equipped with a 75 kWh battery pack and the difference is accessible with an over-the-air software update for a fee.

Prior to the unveiling of the Model S 60, Tesla started shipping Model S 70 with 75 kWh battery packs.