…You’ve done the first 240 miles of California highway with relative ease. But how do you do the second 240 miles? And 3rd…? In short, can you drive cross country?

I’m more than impressed with the Chevy Bolt so far – it has exceeded my expectations by at least 20 miles of range and during my test drive at CES earlier this year in Las Vegas I found it to be very roomy and sporty and frankly a lot of fun to drive. Chevy should absolutely be applauded. We covered the recent reviews here.

But as an EV buyer, I’m not yet satisfied with Chevy’s solution to cross country driving…you know: the quintessential American Road Trip…

The Chevy Bolt, like all other EVs can charge from a regular 110V Plug but like all others, it can only pull about 4 miles per hour of charge. I actually survived my first months of owning EVs with this as my only option but it would take way too long to catch up from long trips – close to 4-5 days often at 50 miles per night on the 110V. My commute to work (read: Coffee shop) is about 8 miles round trip so I wasn’t in a hurry to install a 240 and for people like me, you can get by with only a 110V plug.

But EV owners should really install a 240V plug in the garage – one with a big (read: 60) Amp breaker. Here’s where the Bolt starts falling short of Tesla. The Model S and X and presumably the Model 3 due next year all charge at 48A allowing close to 30-35 miles per hour of charge. That means it takes less than 3 hours to put on 100 miles at home.

The Bolt doesn’t use as many amps in its charger (I can’t find a definitive number but I’d guess around 35A) instead opting for a 25 mile per hour charge at home. Instead of under 3 hours of the Tesla, the Bolt adds 100 miles in 4 hours because it uses fewer amps. The reason is likely because its a less expensive on-board AC/DC inverter isn’t rated for higher amperage. 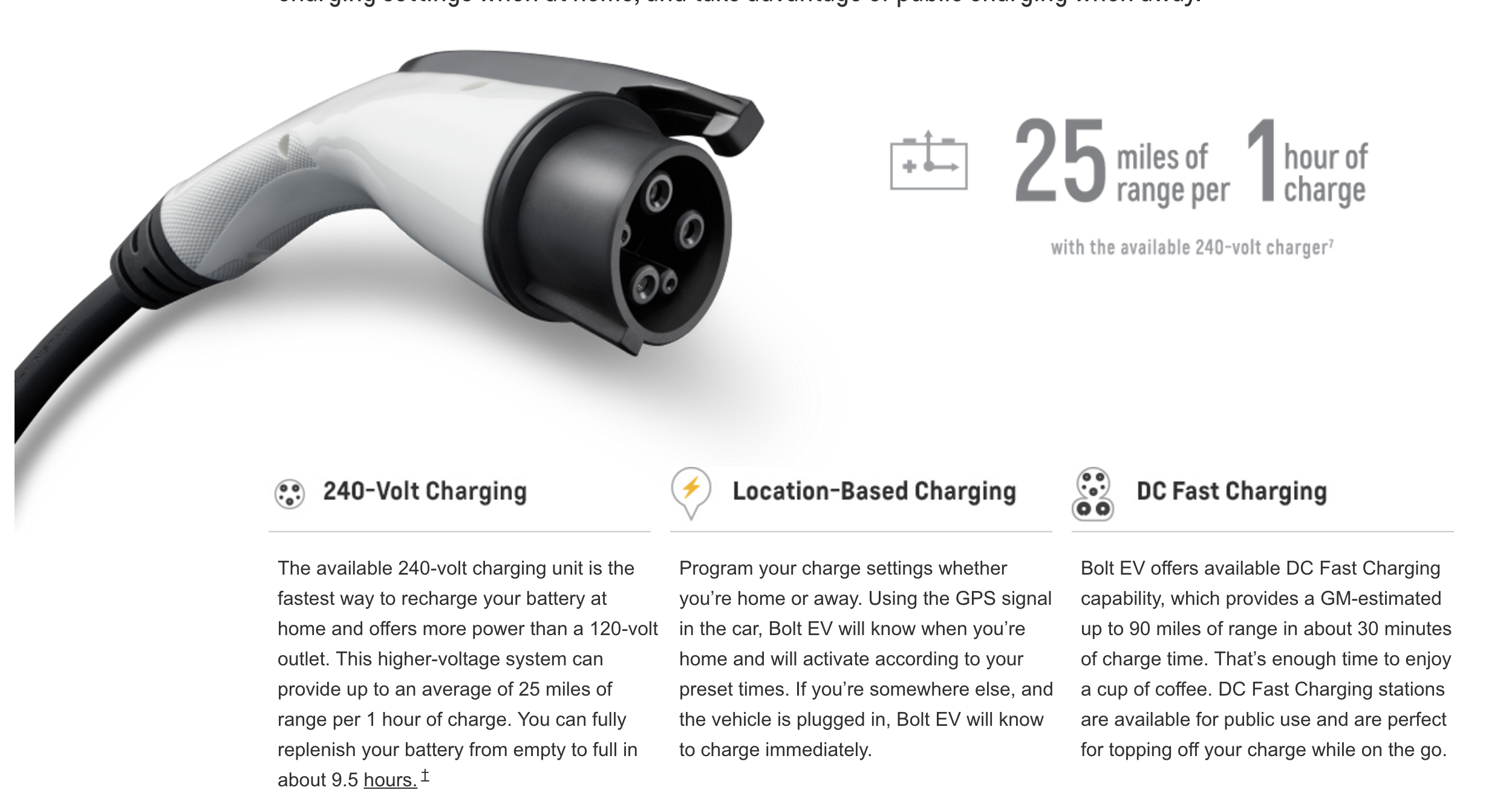 But when we’re talking about trips, we’re not really interested in Level 2 AC charging at all. We need super high-power DC charging at dangerously high volts and amps if we want anything close to a gas station-like experience.

This is where Chevy loses the plot.

When charging at very high speeds, Lithium batteries are a little bit like a glass of water. You can fill up extremely fast when they are empty but as they get closer to full, you need to slow down – a lot. The last little bits of the battery are often not worth filling at all time-wise.

Tesla’s current superchargers can max out at around 145kW and can add over 400 miles of charge per hour – optimally. Realistically it means 20-30 minutes will give you over 200 miles of charge – enough for 3 hours on the road.

Meanwhile Chevy’s SAE combo standard adapter, which doesn’t even appear to be active yet (see image below from the Verge review), only will hit 50kW. This is of course optimal and neither DC chargers, SAE or the third DC charging standard Chademo will hit their optimum specs.

But even at the best speed we can hope for, the Bolt won’t be able to fill its batteries in an hour. 50kW in one hour = 50kWh which means even under ideal circumstances, you won’t get nearly 200 miles in 1 hour.

That’s no way to road trip.

Let’s try to imagine that in a real world scenario… 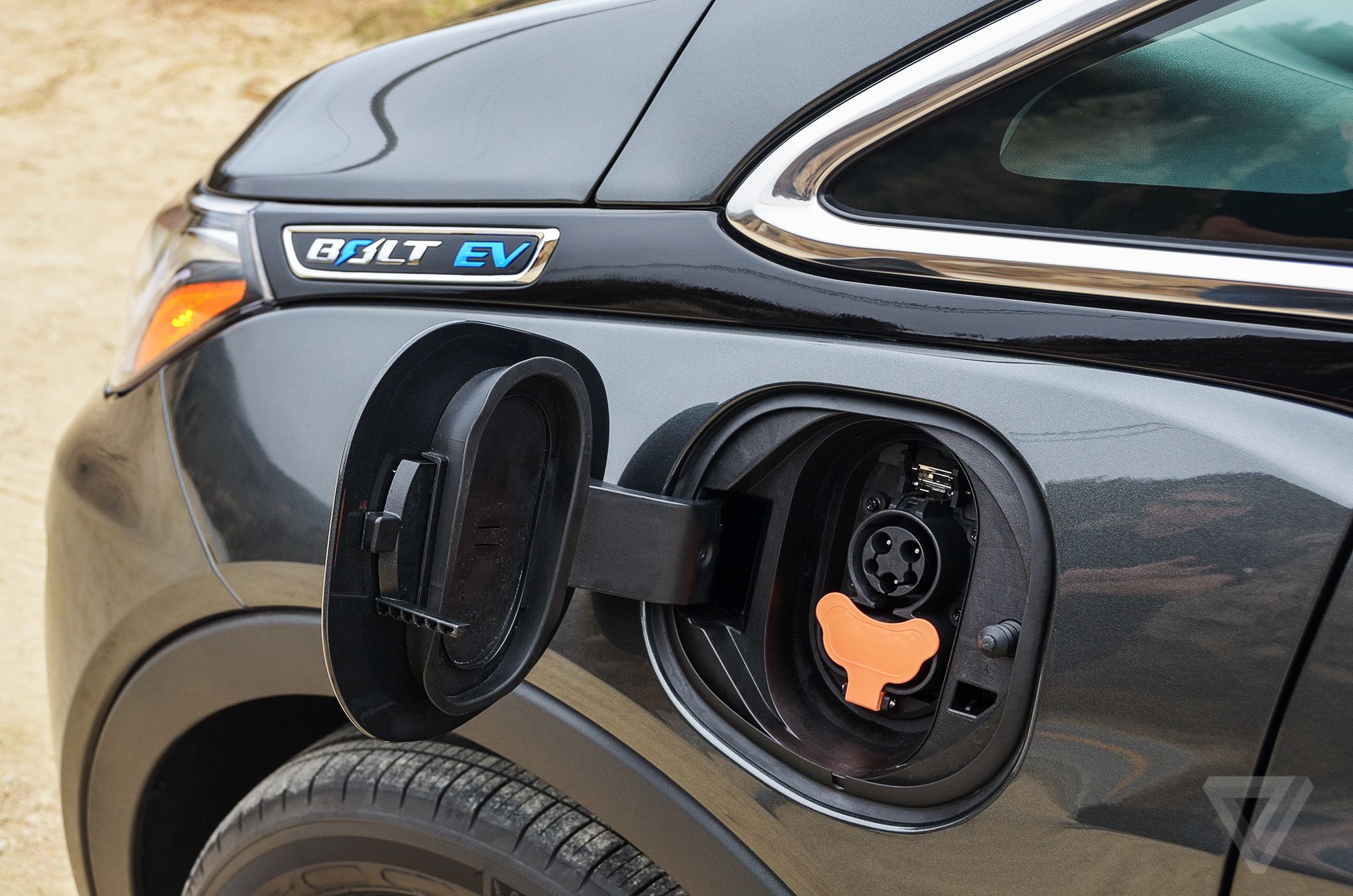 You are driving from Monterey California (just like Chevy’s example) and you decide to hit Las Vegas. You, again, using the example,  pull into Santa Barbara with only electron fumes like the reviewers.  There are 5 DC fast chargers in town but only 3 of them have the SAE adapter that the Chevy Bolt requires because 2 are Nissan dealerships. (SAE and Chademo people can’t we just make adapters and choose a standard already?!). One of these is 24kW which might as well be called Level 2. 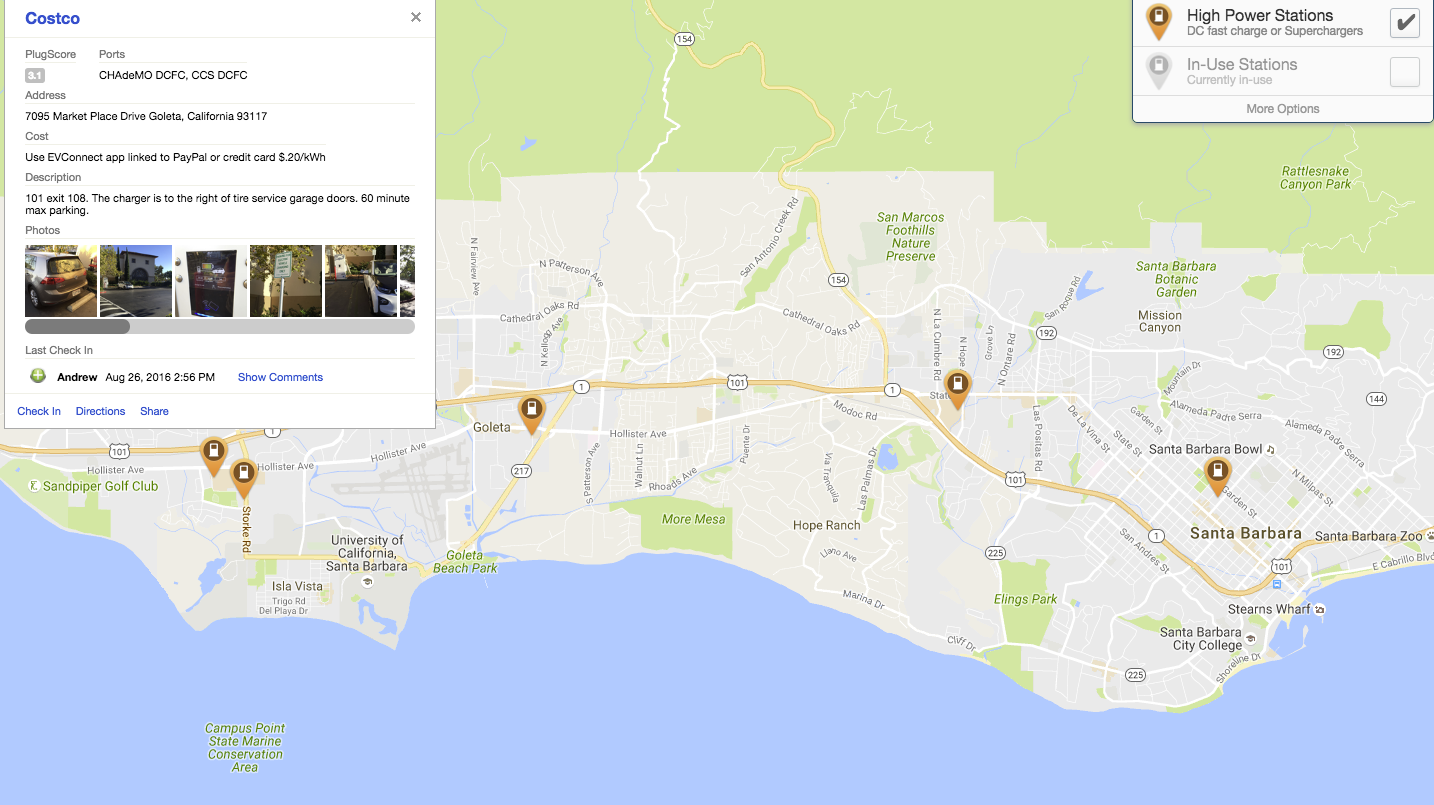 From the picture, you can see that both of the SAE options are single stalls and have both types of DC connectors. So there aren’t 2 locations in Santa Barbara, there are 2 stalls.

Hopefully no one else in the area wants to charge right now.

Assuming they are open, you now may want to get comfortable. It is 365 more miles to Las Vegas. If you sit down somewhere for an hour, you’ll be lucky to get 160 miles of charge. That’s not a bad idea for a long, slow lunch break and maybe some quick shopping.

But now you’ve only got a little over 2 hours of driving and aren’t going to get too far out of LA for your next stop. Assuming you stop again for an hour (you just ate 2 hours ago – maybe do some site seeing, do some web browsing on Electrek.co or take a nap??) you’ll have another 160 miles of range. But not far enough to get to Vegas. You’ll need to make a 3rd stop but this time you’ll only need to go a few miles until you get to your hotel so you can make it a ‘quick’ 25 minute stop.

While that scenario doesn’t seem horrible, stopping for a half hour every 90 minutes or an hour every 2-3 hours isn’t at all like travelling with gas.

With Tesla’s Superchargers, it still isn’t exactly like travelling on gasoline either, but it is way closer. There are far more stalls available and they each charge at much higher rates.

So in this scenario, a Model S would continue down to Oxnard and spend 20 minutes at the Supercharger there which would provide enough range to get to Barstow. There a driver could pick up a quick lunch and have enough juice to get to Las Vegas –saving a few hours and at least one stopover as with the Bolt.

No I’m not advocating for Tesla vs. the Bolt. SAME TEAM – TEAM ELECTRIC, as my colleague Jameson would say.

I am saying that Chevy has done excellent work getting the Bolt out a full year ahead of Tesla’s Model 3 with admirable specs and a delightful experience. But! There is a huge charging issue that needs to be addressed before it can be a completely amazing experience. Chevy needs faster chargers and lots more of them. Tesla learned this early on and is still going nuts trying to build Superchargers fast enough. People love to be able to go on road trips with their cars and a road trip with sparsely placed, medium speed chargers are going to leave Chevy Bolt customers wanting for more.

Chevy needs to do 2 things:

If the Chevy Bolt is actually a huge success, which I hope it is, it brings up all EV ships so to speak. There will be more charging options for everyone, more intelligent shoppers and less CO2 in the atmosphere. But Bolt users will clamor for the type of charging infrastructure that is as good as gasoline. At this point, the Bolt, for all of its successes, falls short in this area.

Bonus work for Chevy: Fix your dealerships. They aren’t equipped to sell EVs.