2017 Chevy Volt Review wrap up: All of the upside and none of the downside for ICE converts 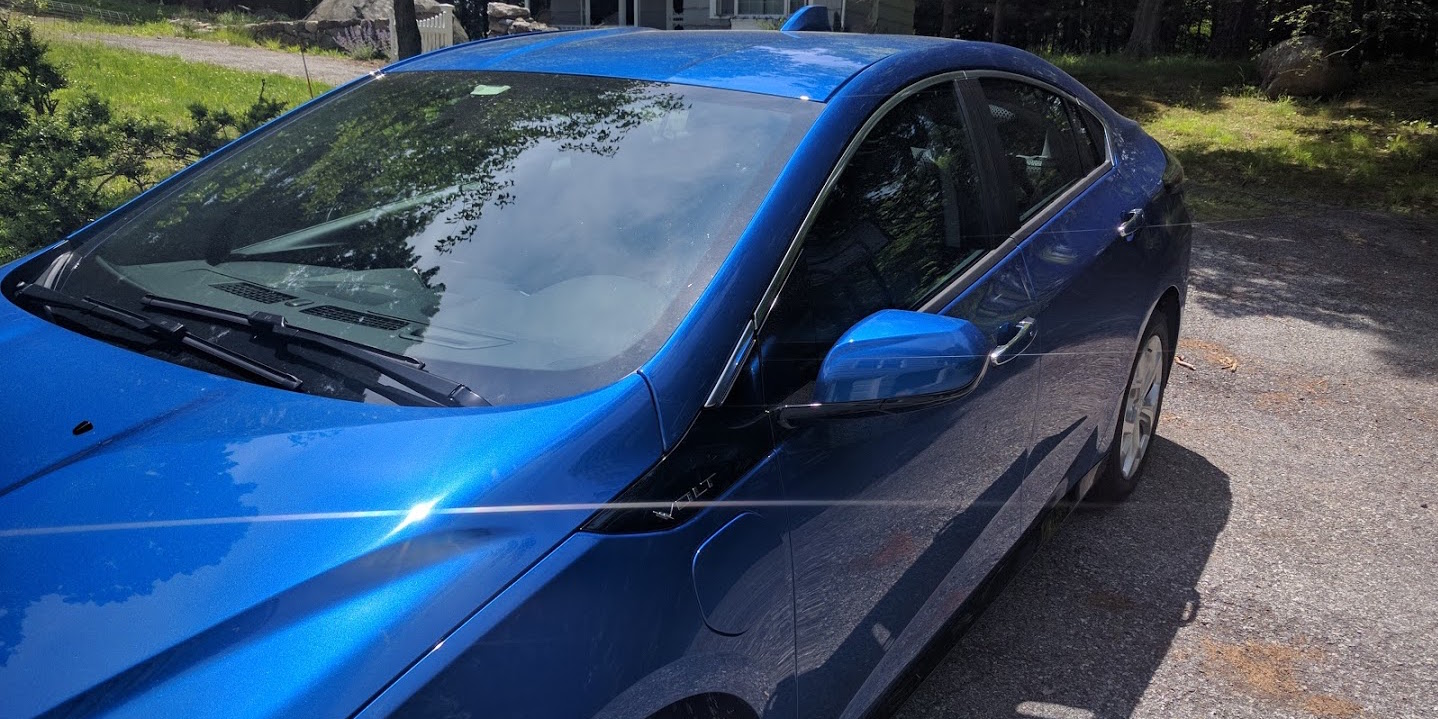 I’ve been forming my big picture opinion of the 2017 Chevy Volt over the past week and journaling the experience in a set of diary posts (1, 2, 3-4). It has definitely been a journey from my initial impressions to becoming extremely comfortable with the car in a matter of days.

Overwhelmingly, the 2017 Volt is a fantastic car that will fit into many people’s lives and probably be one of the most functional mass-market electric cars for the next 3 years. The numbers don’t lie – Volt sales are up while some EV competitors are down.

I say 3 years because I believe that is how long, give or take, it will take electric infrastructure in the US to be as convenient as gas – at which point it will become more convenient. Sure, almost every house, building and structure has an electrical outlet which can charge on level 1 or 2 (and the 2017 Volt does both levels of AC charging), meaning you wake up every morning with a full 53 mile “tank” of electricity. But to finally close the convenience gap of gasoline and frankly beyond, pure electric cars need to be outfitted with high power DC chargers and long range batteries — both of which the Volt lacks.

As a pure electric car owner, there are still a bunch of ski resorts in Vermont I can’t go to with my long range ‘200 mile’ electric car. To travel to my parents’ house in Ohio from New York, I need to avoid the straight shot Interstate 80 and dip down almost to Maryland to stay on the Supercharger route. Even going to an EV show in Montreal next month will require me to go 2-3 hours out of my way to stay charged up.

Don’t get me wrong. We’re close, but we’re not there yet with electric infrastructure. The case is being made but there are still many obstacles outside of the $1 Trillion dollar Oil industry.  For one, currently three different DC fast charging standards exist (Tesla, SAE and Chademo) so there’s work needed to either consolidate or build (more) adapters. DC charging will also speed up over the next few years. Teslas can currently charge at 135kW while most other EVs top out at 50kW. That means most DC charging “fill ups” will take at least 30 minutes.  But Tesla wants to take that down to 5-10 minutes by the time the Model 3 is released and has all but abandoned its under 90 second battery swap plan.

I’m currently willing to make these route/time sacrifices because I love EVs, clean air and my Tesla, but I don’t think mainstream users are OK with going hundreds of miles/several hours out of the way to make a medium-long trip electrically for the next few years.

Every morning when you wake up with the 2017 Chevy Volt, you will have 53 real miles of EV usage. If you have a huge commute (over 25 miles), you can opt to charge at work and drive 53 miles of pure electric back. Some people will never finish the tank of gas that comes with their new Chevy Volt.

But when you need to take the “off the beaten path” and switch into gas, the Volt does so elegantly and seamlessly. The internal combustion engine kicks in and you get a very respectable 42 miles per gallon and over 400 miles of total range. Chevy should be applauded for their efforts in building a car that makes the transition to electricity 100% totally painless for just about anyone.

Chevy has somehow fit two separate powertrains into a mid-sized car and still has respectable room in the trunk and back seat. The car also performs as well as any under $30,000 (after incentives) car should be expected. The EV acceleration will get you to highway speeds in under 7 seconds while lugging a dormant ICE powertrain along for the ride. The acceleration will surprise and delight you if you’ve never driven electric.

Chevy has also toned down the “look at me, I’m a weird EV” factor in the 2017 Volt design. The 2017 Chevy Volt looks a lot like other sporty mid-sized cars, and at least in the blue loaner I test drove, looks great to my eyes. The interior is also extremely nice, highlighted by the iPad mini-like capacitive touch center console display which works great with Apple CarPlay or Android Auto. The Bose stereo rocks, the seats are comfortable, there are cupholders where they need to be and the inside experience is fantastic.

For an EV enthusiast family like mine, this is a second car for going on those trips where fast DC charging options don’t exist while still only using electricity for the daily commute. But for many, this will be the first toe dipped into an EV experience and I’m happy to report that it will be a good one.

In fact, this might be my biggest gripe about Chevy. If you go into a car dealership, almost no one knows anything about EVs, charging, infrastructure or experience. Because of this and other factors, salespeople aren’t likely to push buyers toward a new type of vehicle.

If GM/Chevy truly believe in an EV future, they need to create a separate amazing experience for EV customers with or without the car dealers. I’m talking about EV-only salespeople, displays on how to use chargers and what the infrastructure looks like need to be built. Maybe show off a DC charger for the Bolt that shows how quickly it fills up? The Bolt/Volt need to be centerpieces in the showroom displays rather than parked, uncharged, at the back of the lot with unwilling salespeople who are reluctant to make the trip unless asked specifically to do so.

Rather than fight Tesla’s direct sales model, maybe GM should embrace it. No one likes the car dealer experience and prospective Volt/Bolt buyers aren’t being given the type of experience they deserve. Set up some mall kiosk stores, wall off some space at the dealerships. Educate.

If Tesla’s 400,000 Model 3 pre-orders isn’t a wake up call to the top brass at GM that they have a huge asset and huge opportunity right now that they need to exploit, nothing really will shake them up.

In fact, why stop at the Volt/Bolt? Put a Voltec powertrain into a pickup truck, a midsized SUV, a mini van, a Camaro and every other car they offer. As Tesla often points out, the savings of electricity over gas makes up for the added cost of batteries, and electric engine and the Volt’s EV drivetrain easily handles the extra weight of the extra ICE drivetrain.

Sadly, I give my Volt loaner back tomorrow and our second car will again be the plug-in Prius which we’ve happily left dormant in our garage since the Volt delivery. Both my wife and I would immediately trade in the Prius for a Volt – my wife emphatically so.

But then I think about going back to the Chevy dealership and dealing with the old fashioned ‘car guy’ who has been doing things the same way for 30 years. It feels like he’s just learned how to use the computer and hates it. It takes him about 30 minutes to enter our name/address/etc. information into the computer. He ‘needs’ to run every small decision by his manager to gum up the process. He’s offering us stale coffee and our kids are crying because there is nothing to do. He’s emphatic that we need the seat warmer option and keeps offering to throw in ‘special only this month’ 1.9% financing even though I’ve already offered to pay in cash and just want to get out the door. He gets a special incentive to get us to finance even though it is in no one’s best interest.

This is the same guy who gave us a 2016 Volt test drive a few months ago without having been properly charged (‘can’t figure out this stupid EV adapter’ and didn’t know the difference in ride between EV mode and ICE. I prodded him but he hadn’t heard about when the Bolt is going to hit the market and doesn’t know about the “charging mess” that EVs present. He’s heard a rumor that the new Corvette is going to be amazing though.

I know if I walk into the dealership and say I want to buy a Volt, he’s going to push me toward a car that’s been sitting on the lot rather than one configured like I want. I know I’m going to have to haggle and it is going to get super uncomfortable if I want the best price I can get. I’m going to have to sacrifice a day of my life to go through this process.

That’s my big takeaway. I’ve driven the 2017 Chevy Volt. I know it is probably the best car option for me and my family for the next 2-3 years. I know what options I’d take and have the money and trade-in to purchase it right now…but now that I think about the process of getting it, I’m probably just going to make due until Tesla releases the Model 3 and I can order it online.

(If you can handle car dealers, I recommend leasing the 2017 Volt for 3 years and not getting rid of your Tesla Model 3 reservation 😉