Now that mostly everyone has had a chance to catch up on GM and Chevy’s recent announcement about their Bolt EV, we thought it would be helpful to roundup some of the initial first impressions about the car from members of the press that were flown to California by Chevy to test the Bolt’s range…

To summarize, the general consensus on the pre-production Bolt seems to be that the  performance is perfectly ‘great bang for the buck,’ the interior is much more comfortable and spacious than expected, and, of course, the price tag along with the 238 miles will definitely compete closely with the upcoming Tesla Model 3. Summaries:

Roadshow by CNET  went on the drive with the mindset of not treating the Bolt any differently than other cars, and here is what came out of it:

“Headroom is generous, front and rear, as is leg- and shoulder-room. There’s plenty of room, basically. There’s a fair bit of tech, too, with support for both Apple CarPlay and Android Auto, plus a lane-keep-assist system that’ll keep you from wandering […]

Handling is reasonably good. A 3,500-pound weight means the Bolt is far heavier than most of its competing subcompacts, but that does make it lighter than many other EVs out there. That, plus the battery pack situated in the floor, means surprisingly deft handling and a reasonably fun drive […]

Through the course of the day I covered 240 miles and arrived at my destination with a whole 17 miles left on the clock. Again, that was without driving conservatively. Note that this was in near ideal conditions, moderate speeds at moderate temperatures. Colder weather will mean less range, as will higher speeds, but in its element you’ll be able to get plenty far in the Bolt. Far enough that you might just be be looking forward to taking a break.”

Most interesting to us was the comments on the tires which sound like they emphasize efficiency over performance and might be a reason for that higher than expected 238 mile range:

However, push things too hard and you’ll quickly find the limits of the tires, which offer about as much grip as a curling stone. Still, in a machine like this, low rolling resistance is key.

Okay, it’s not a model S or a model 3 or even a model X at that matter when it comes to acceleration But it’s reasonably peppy. We’ve got a sport mode here. You can push on the dash, give you a little bit more acceleration. And then once you do that it actually accelerates pretty well. Although we’re a little bit hampered by some low rolling resistance tires that have about as much grip as a billiard ball. You put your foot down and it actually starts to spin. Despite the fact that we’re not really talking about a whole lot of horsepower here. But the handling over is quite good. And that’s helped by the fact that this car weighs about 3,500 pounds.

“It was a warm day, and General Motors mapped the test route I followed, which started with a 100-mile cruise down the coast on Highway 1, where I averaged about 40 mph. Then I spent an hour on Highway 101, zipping along at my typical freeway speed of 70 mph. I had no trouble keeping up with traffic making a 2,000-foot climb through Los Padres National Forest. At no point during the day did I feel I had to back off to save the battery […]

The car is remarkably spacious. The wheels are at the corners and the drive-train is down low, maximizing space. Clever engineering created room in unexpected places. The front seats, for example, are half as thick as conventional seats, improving rear passenger space without sacrificing comfort.”

Green Car Reports focused more on explaining how they felt on the driving and performance part in addition to the different driving modes that the Bolt will include:

“On the road, the Bolt EV doesn’t feel as heavy as some steel-bodied electric cars do. With a weight of 3,580 pounds, it’s relatively light for its 60-kwh battery size and 94-cubic-foot interior volume.Handling and road holding was predictable, and that 200-hp motor offers more than enough performance to keep up with traffic. Standing-start acceleration is good too […]

When you set out, the normal Drive mode on the “gear selector” lever behaves just like a car fitted with an automatic transmission—complete with idle creep when the car is stopped unless you keep your foot on the brakes. But we spent virtually our entire drive using the alternative Low range, which increases regenerative braking considerably—and will smoothly slow the car to a complete stop without using the brakes […]

We felt the Bolt EV’s regen was a little smoother around the edges than the [BMW] i3’s, though we’re eager to test the cars head-to-head to see if our sense was accurate. Chevy deserves credit for offering both types of driving in the same car. Most electric cars mimic the automatic-transmission driving experience, often with various modes that increase regen.”

Since The Verge essentially had the same opinions on the topics listed above (performance, interior, driving modes), I wanted to pull one unique perspective out from their article that I thought was extremely compelling:

“The first word that comes to mind is “ordinary.” And I mean that as a big compliment. The Bolt doesn’t feel different from any other car: you get in, press a start button, shift into drive, and go.It has a steering wheel; four doors; four tires; keyless entry; a big screen in the middle that supports CarPlay and Android Auto; brake and accelerator pedals; headlights; a horn; and, thanks to the flat-pack battery underneath the floor, tons of room inside.”

This ‘ordinary’ familiarity will be absolutely crucial in the success of not only the Bolt or Model 3, but the adoption of electric vehicles in general. And we applaud the fact that Chevy made it a point to design the Bolt in such a way. Because let’s face it, there are a lot of people out there that are afraid of change and by eliminating as many obstacles as possible the public has with electric vehicles, it will only benefit the industry as a whole in the long run.

The LATimes actually got almost 300 miles of range – they finished the 240 mile journey with 60 miles of battery left. Pretty impressive.

Car and Driver shared its final range gage which has 34 miles left after travelling 238 miles. Impressive. 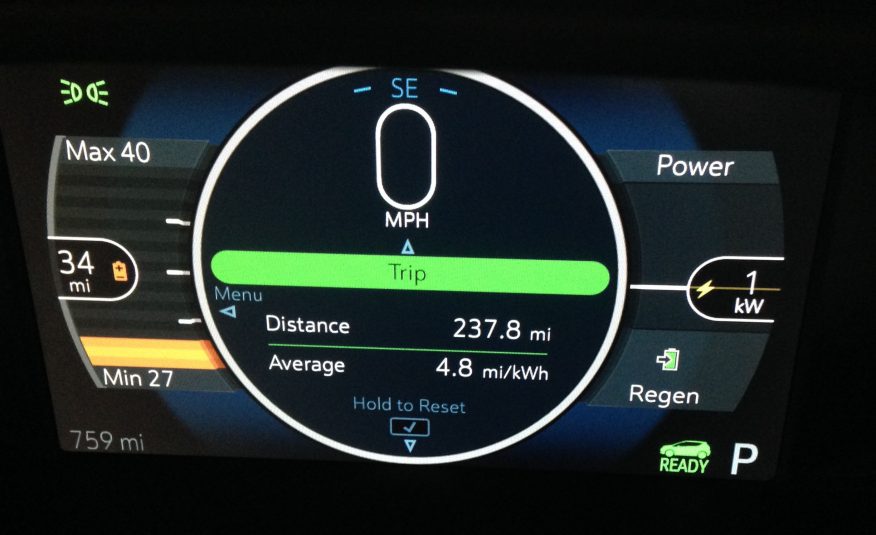 We have listed some basic specifications below, but you can find all the details at Chevy’s official webpage:

Finally, for your viewing pleasure, a couple of first impression videos from Roadshow by CNET and Wired.

Tim Stevens with Roadshow: “we made it. 240.4 miles covered, 17 miles of range left, that’s really impressive. Frankly, I don’t even know what to complain about this car. I’ve been really impressed with just about everything thus far. I didn’t even have to drive it carefully.”

Wired: “The Bolt is a genuinely nice car, lots of legroom, a 10.2 inch touchscreen, even a special spot to hold your phone. Affordable and it can go the distance. Looks like Chevy is about to change some minds.”