Tesla’s brand has significantly increased in value over the past year, especially since the Model 3 unveiling and the more than 373,000 reservations it received. On the other hand, Volkswagen’s brand took a big hit following the ‘Dieselgaste’ scandal, so much so that Tesla has now surpassed the company’s VW brand in “brand value”.

BrandZ published its annual report of the 100 most valuable brands and Tesla knocked VW out of the top 10 in the car category.

The BrandZ report is a popular annual research paper by the Millward Brown group. The company says that it uses data drawn from interviews with more than three million consumers worldwide.

The group valued Tesla’s brand for the first time and estimated it at $4.4 billion (the brand – not the whole company) – enough to reach the 10th position. BrandZ highlighted the following about Tesla in its report:

“The Tesla brand has come to represent much more than beautiful cars; it also means breakthrough technology and exhilarating performance. Tesla has become a symbol of a new way of living – clean, bright, innovative and forward-thinking. Tesla’s pioneering spirit, as personified by founder Elon Musk, conveys an urgency to shed the old ways of doing things. Earlier this year, 325,000 (note: now 373,000) consumers were so enamored with the vision of, and the emotion radiating from the brand that they put down a $1,000 deposit on a vehicle they had yet to see. In this case, vision and emotion combined to create real capital.”

While the Volkswagen’s group VW was surpassed by Tesla, the company still has its Audi brand in the top 10 with a valuation standing at $9.5 billion, but it lost 6% since last year – mainly due to its association with Volkswagen. 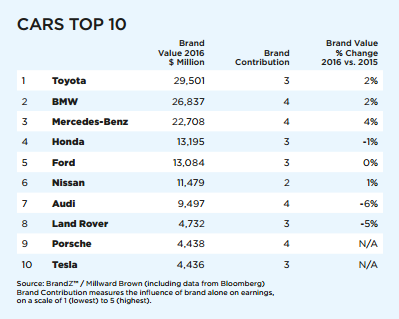 As it turns out, it looks like Volkswagen was far from the only automaker found to be cheating on vehicle emissions, but as the first to be caught, it took the biggest hit in term of image.

Over the years, Tesla had its fair share of bad publicity too, but BrandZ highlights the company’s impressive use of smart marketing over simple advertising:

“Tesla, a new entrant into the BrandZ™ Top 100 this year, is one of the new kids on the block. Its brand advertising and advertising impact show a pattern common to new and up-and-coming brands. Tesla’s brand equity has grown a lot over the last few years, and while famously not an advocate of traditional above-the-line advertising, the few marketing dollars it does spend have grown noticeably in both value and effectiveness in 2015 compared to previous years, and we see this manifest itself in increased impact on both conversation but also search as a result. At the same time, brand-supported interest and buzz continues to increase over the long term. Like many young brands, Tesla shows the impact of effective advertising – in whatever channel – on driving growth; and as its brand gets stronger, so its communications become more efficient and more effective at converting into brand equity. This is a virtuous circle: the more activity a brand does, the more people will know it; and the more a brand is known to people, the more meaningful – and therefore effective – its advertising becomes.”

Interestingly, BrandZ refers to Tesla’s brand as ‘Tesla’ and categorizes it in the car category. Tesla’s official company name is ‘Tesla Motors’, but the company branched out in the energy storage business under its ‘Tesla Energy’ division. The company recently acquired the ‘Tesla.com’ domain and it looks like its brand is expanding and diversifying.

It seems that there’s now a distinction between the company, Tesla, and its divisions, Tesla Motors, its car brand, and Tesla Energy, its stationary energy storage brand.