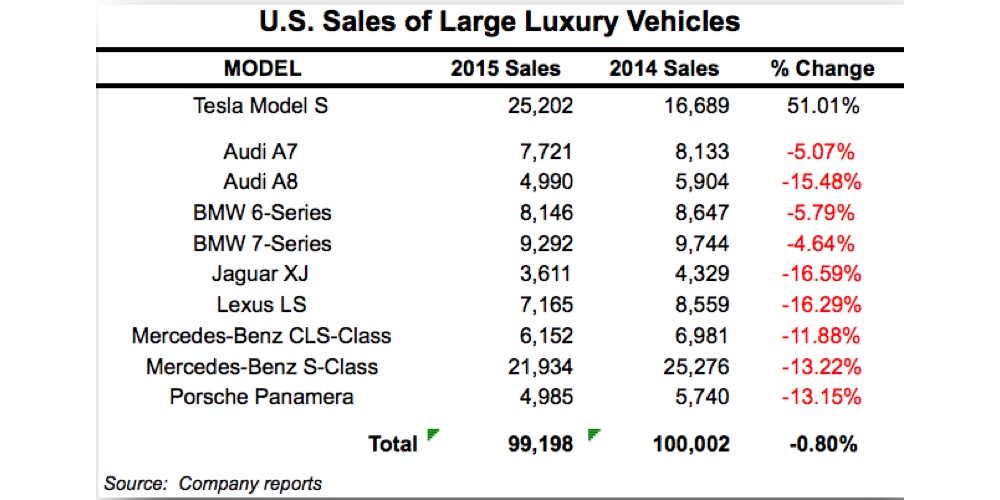 As part of its shareholder letter posted ahead of its earnings call today, Tesla demonstrated its catastrophic affect on the US luxury car market with a simple table. If you start at the bottom, the market is at about 100,000 cars a year and it’s basically unchanged from 2014 to 2015.

The market is for “large luxury” cars and includes not only the Model S but Audi’s A7 and A8, BMW’s 6 and 7 series, the Jaguar XJ, Lexus LS Mercedes CLS and S Class and the Porsche Panamera. Each of these models has fallen in sales from almost 5%-over 15% from 2014-2015.  Where did these sales go?

In Q4, we increased global deliveries over 76% year on year as Model S market share gains continued in every geographic region. In the U.S., just over three years after entering the market, Model S took share from all incumbent manufacturers to become the number one selling comparably priced four-door sedan. In fact, Model S was the only vehicle in its class with growing sales last year. Even on our competitors’ home turf and in countries without government incentives to purchase electric vehicles, Model S is winning. For example, in Switzerland, Model S outsold the Mercedes Benz S-Class, the BMW 7- Series, the Porsche Panamera and the Audi A-8 combined for the full year, and also outsold the Mercedes Benz E-Class. In Germany in Q4, Model S outsold the Porsche Panamera. Finally, across all of Europe last year Model S outsold the Audi A8 and A7 combined and the BMW 7-Series and 6-Series combined.

While it is only one data point and surely Tesla is painting this picture to their advantage, it is a stark reminder of what kind of damage the Model S’ disrupting power has had on the industry. Further, it should be a beacon for mass market car manufactures on the potential disruption power of the upcoming Model 3, which will be unveiled on March 31st as confirmed by Tesla today.

Update: We extrapolated the data to see what happens to the US mid-luxury market if the Tesla Model 3 does as well as the Model S.