Tesla Model S gets IHS Teardown treatment: “Unlike any car ever made, more like an iPad”

Tesla’s Model S (or a wrecked one) got the IHS Supply teardown treatment and if you are wondering what makes the car tick, it is a worthy watch/read (PDF). Notably Tesla “really wanted to do things differently and employed virtual controls—rather than physical knobs and buttons—to take over the user experience. This approach required a major investment in big displays and touch panels, similar to the approach Apple took when designing the iPhone and iPad.”

It is no secret the NVidia processor runs the display and the center stack. Other notables: 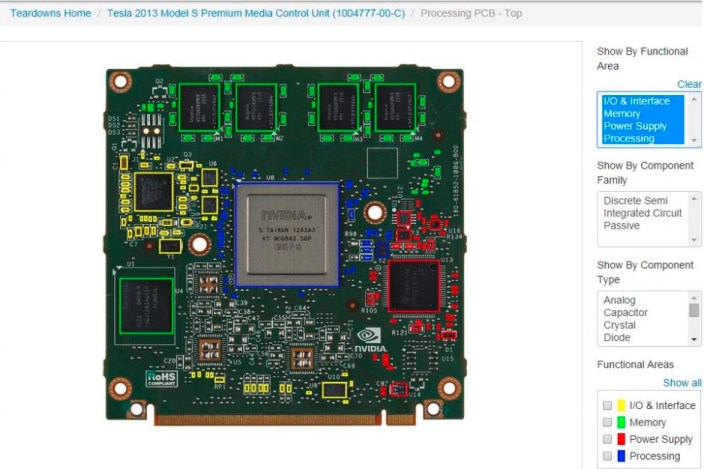 However, the company’s unique approach to automaking runs far deeper than the Model S’s electric drivetrain, battery packs and futuristic body. In fact, the company’s unconventional approach extends all the way down to the electronics behind the car’s infotainment and instrumentation systems, according to the Teardown Analysis Service at IHS Technology (NYSE: IHS).

A physical dissection of the Model S reveals that in terms of design, components and manufacturing, these user-oriented subsystems have more in common with a tablet or smartphone than they do with a conventional automobile.

“The cost structure of the electronics, the use of large displays in the cabin, the touch-screen-based controls, the mobile microchips—everything in this design makes the Tesla experience more like a media tablet or high-end smartphone than a traditional automobile,” said Andrew Rassweiler, senior director for materials and cost benchmarking at IHS. “It’s like looking at the components from the latest mobile device from an Apple iPad or Samsung Galaxy product. When it comes to the user-facing segment of the Model S’s electronics, the company has radically departed from business-as-usual in the automotive market.”

IHS is in the process of conducting a complete teardown of a Model S, dissecting and analyzing each subsystem, from the air-conditioning controls, to the safety systems, to the powertrain. The initial analysis focuses on the car’s two most electronics-intensive segments: the virtual instrument cluster and the premium media control unit—aka the head unit—which is the main center stack and touch-screen panel.

The analysis has generated a list of outstanding features and superlative attributes, including:

A display of audacity

The cost structure of the Model S’s premium media control unit closely resembles that of a smartphone or tablet because the display and touch screen are the two most expensive subsystems, the same as for an iPhone or iPad. The high cost is due to the sheer scale and size of the display and touchscreen.

“The mobile device-like approach to the Model S’s user interface represents a very deliberate choice by Tesla,” Rassweiler said. “The company really wanted to do things differently and employed virtual controls—rather than physical knobs and buttons—to take over the user experience. This approach required a major investment in big displays and touch panels, similar to the approach Apple took when designing the iPhone and iPad.”

The Model S display is some 10 inches larger than the typical screen sizes seen in many automotive head units. The resolution of the display is 1,920 by 1,200, again exceeding the norm for cars.

Significantly, the touch screen is made by TPK Holdings, which also was the first touch-screen supplier to Apple for the initial models of the iPhone.

In another sign of Tesla’s unconventional approach, the company has conducted its own design and engineering activity for the electronics: multiple printed circuit boards (PCBs) in the Model S’s head unit and instrument cluster bear the Tesla moniker.

Automakers typically delegate the electronic design of items such as head units to major automotive suppliers, such as Alpine, Harman, Panasonic and others. By conducting its own design in this area, Tesla not only can deliver a highly differentiated solution, but also has much more control over the costs and sourcing of parts.

Tesla likely turns over its designs to an electronics manufacturing services (EMS) provider, which then conducts the assembly of the subsystems. IHS understands that in some cases, Tesla is employing EMS providers to build these electronic assemblies.

With this model, Tesla once again is behaving more like a smartphone or tablet seller than a normal carmaker. Apple, for example, keeps tight control over its iPad and iPhone designs, while outsourcing the assembly to EMS companies such as Foxconn.

An example of how Tesla performs its own custom engineering can be found in the Model S’s touch-screen controller. The large size of the touch screen requires additional electronics, when compared with smaller touchscreens. The IHS teardown indicates that Tesla apparently has developed its own touch-controller PCB to manage this task. With smaller smartphone and tablet touchscreens, in many cases the touch control subsystem will be provided as part of a turnkey solution from the touchscreen vendor.

The Premium Media Control Unit also employs an unusual modular approach that leverages solutions from semiconductor makers and other suppliers.

Tesla’s virtual instrument cluster is centered on a 12.3-inch diagonal 1280 by 480-resolution LCD from Japan Display Inc., one of Apple’s iPhone 6 and 6 Plus suppliers. This is the center/core of the design and—just as in the head unit—it is the single largest cost driver. The Cadillac system has the same display size and resolution display, but from another vendor.

The virtual instrument cluster features the NVIDIA Visual Computing Module, an unexpected and impressive show of computing power that features a Tegra 2 processor. Considering there is also an NVIDIA Tegra 3 in the Premium Media Control Unit, this is a notable array of computing horsepower in a single automobile.

While some other automakers are using the Tegra 2 in their head units, Tesla is bringing the prodigious chip to bear on the instrument cluster, a less demanding application.

NVIDIA controls one of the largest shares of the value of electronic components throughout the Model S. The two Tegra processors within turnkey embedded modules command a sizable price tag. The NVIDIA visual computing module with Tegra 3 processor on board, in particular—the first time IHS has detected this part in a car—represents a high-value portion of the design.

Attached to this press release is a table listing major component suppliers throughout the entire Tesla S.

Beyond the virtual instrument cluster and the premium media control unit, IHS is conducting a teardown of all major subsystems within the Tesla Model S, including the following:

IHS (NYSE: IHS) is the leading source of information, insight and analytics in critical areas that shape today’s business landscape. Businesses and governments in more than 165 countries around the globe rely on the comprehensive content, expert independent analysis and flexible delivery methods of IHS to make high-impact decisions and develop strategies with speed and confidence. IHS has been in business since 1959 and became a publicly traded company on the New York Stock Exchange in 2005. Headquartered in Englewood, Colorado, USA, IHS is committed to sustainable, profitable growth and employs more than 8,000 people in 31 countries around the world.

Editor’s Note: Photos to accompany this news release are available for download at the following link: http://press.ihs.com/tesla-teardown.

IHS is a registered trademark of IHS Inc. All other company and product names may be trademarks of their respective owners. © 2014 IHS Inc. All rights reserved.

If you prefer not to receive email messages from IHS, please email michelle.culver@ihs.com