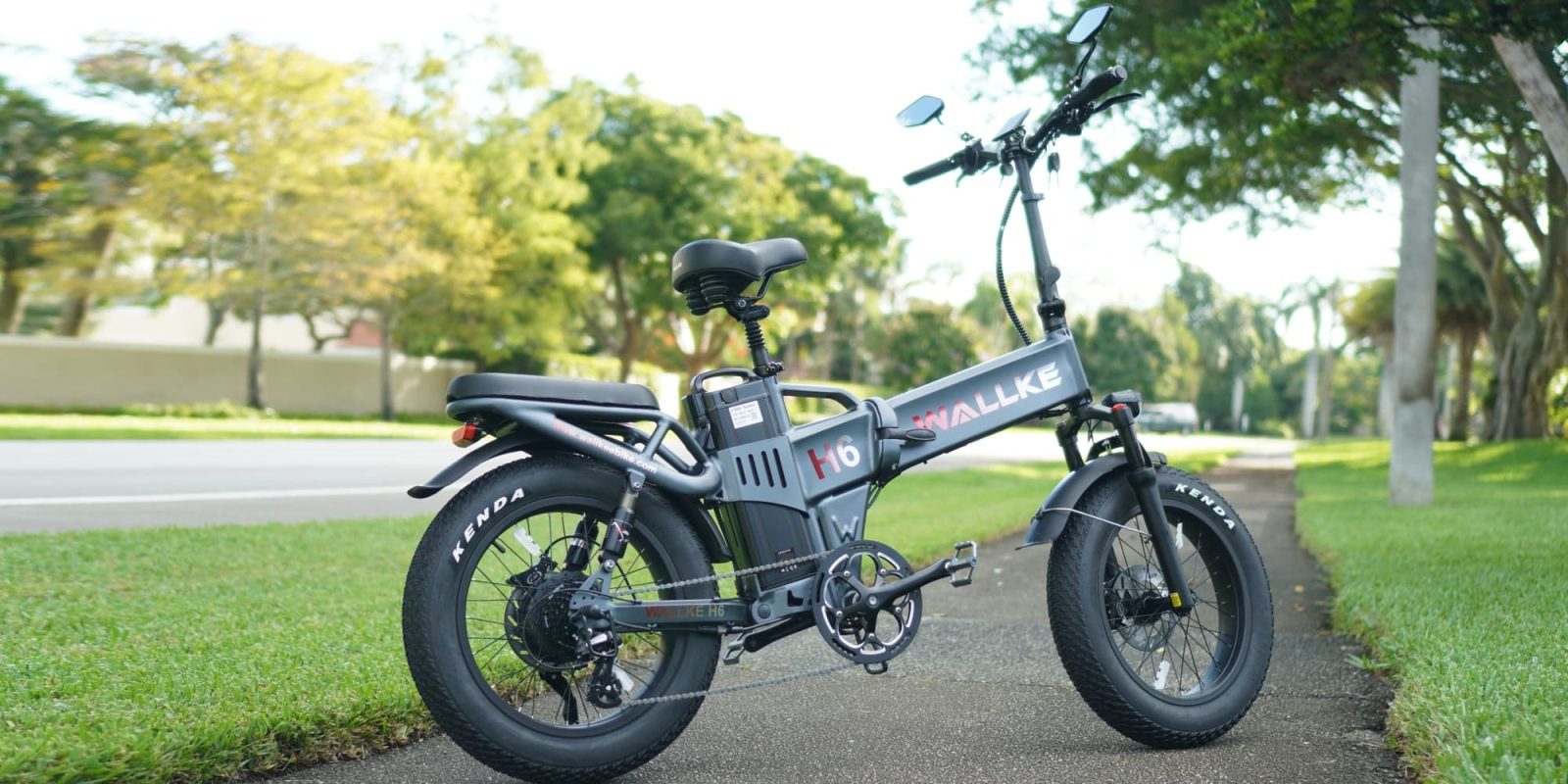 Generally speaking, folding electric bikes are usually on the smaller and lighter end of the spectrum. They tend to prioritize compactness over performance, which makes sense for a folder. At least that was until the Wallke H6 came around and flipped the script, saying “Screw your compactness. We’re a crazy fast e-bike that just happens to fold in half!”

The Wallke H6 doesn’t pull any punches. It may have smaller diameter 20″ wheels, but this is still 90 pounds (41 kg) of e-bike coming at you fast.

And that’s not hyperbole. This thing gets up to a claimed 32 mph (51.5 km/h) – though I clocked it with GPS at 31 mph (50 km/h). Either way you slice you slice it though, that’s pretty darn fast. And it doesn’t take very long to hit those speeds either.

It’s a big bike with a lot of attitude. But it’s also got a lot of interesting parts on it too, from a powerful motor to a pair of long-range batteries.

Check out my testing of the Wallke H6 folding fat tire e-bike in my video below, then read on for the entire scoop!

I’m no stranger to folding e-bikes from Wallke, but this one takes the cake when it comes to excess.

The powerful motor gets paired with a powerful controller that takes full advantage of that big battery capacity to offer impressive acceleration.

Whether you’re rocking the throttle or pedal assist, high power is available at your fingertips (or toes).

But just as important as a high-power e-bike that gets up to 30+ mph speeds is a bike that can also stop. And these hydraulic disc brakes on what look like motorcycle disc rotors accomplish that goal with flying colors.

Add in that bright and colorful LED display between the hydraulic disc brake levers, and you’ve got a very nicely outfitted cockpit.

I will say that the bars felt a bit higher for me than I might have liked. They weren’t ape hangers, but they definitely had a cruiser-esque feel to them with my hands up higher than I normally like. I got used to it pretty quickly though.

In fact that whole bike feels bigger than it looks, and it puts you in a nice, upright seating position that gives you a tall view of the road ahead of you.

With both front and rear suspension, there’s a lot of moving parts down beneath you that help lift that frame up and give you a bit of height. For shorter riders, keep in mind that the suspension seat post limits just how low the seat can go. I’m 5’7″ and I had no problem with seat height, but shorter riders than me could start to run into issues. Wallke recommends a minimum rider height of 5’4″, for reference.

The star of the show here (and part of what contributes to the extra heft of the Wallke H6) is the pair of batteries. Adding up to 1,680Wh, there’s a ton of battery capacity on this bike.

They humorously rate the bike for 170 miles of range. Except that figure isn’t quite so laughable when you realize that works out to nearly 10 Wh/mile, which is a reasonable consumption level for a fit rider using pedal assist.

Call me crazy, but I’m guessing most people who buy this bike aren’t going to shoehorn into this “fit rider” classification, at least not the type of rider that can pedal an e-bike for 170 miles.

So if you’re rocking throttle-only riding, then expect a range of likely 50-75 miles depending on how fast you go. That’s still a super long range for a throttle-controlled e-bike, and is only possible thanks to that massive amount of battery spread across two large battery packs.

Who is the Wallke H6 e-bike for?

So what kind of rider would choose this e-bike?

The Wallke H6 is a bit of an enigma. It’s a folding e-bike, but it’s not particularly transportable. It’s freaking heavy, and it’s a bulky e-bike even in its folded form.

That being said, the ride it offers is definitely more of a moped-style ride than a typical folding e-bike ride. This isn’t just a city commuter, this is an urban assault e-bike.

To me, that means this is an e-bike that fulfills something of a Super73-type role, but with an e-bike that could conceivably fit in a large car’s trunk. It may be heavy, but it still folds in three places to take up less of a bulky block than a typical non-folding fat tire e-bike.

Is it worth the price?

At the current sale price of $2,499, you’ve got to shell out a significant amount of dough for the Wallke H6. But is it worth it?

When you look at the specs, you actually get a lot for that price. This is an e-bike that exceed class 3 speeds, comes with an 8-speed transmission and big ol’ hydraulic disc brakes, a color LED screen, full-suspension (with a third suspension point in the seat post) and a bench seat for a passenger. Oh yeah, and two massive batteries.

I’d have loved to see some good passenger foot pegs and a torque sensor at this price, but even so, this is a lot of bike with a lot of performance.

This is probably still more bike than most people need. But if you’re in the market for a high-performance, fast, and powerful e-bike that can fold into a bulky block, the Wallke H6 will get you there. And it will do it quickly.

Just remember to lift with your legs.