CSC RX1E electric motorcycle coming to US riders, hitting 80 mph for under $8,000 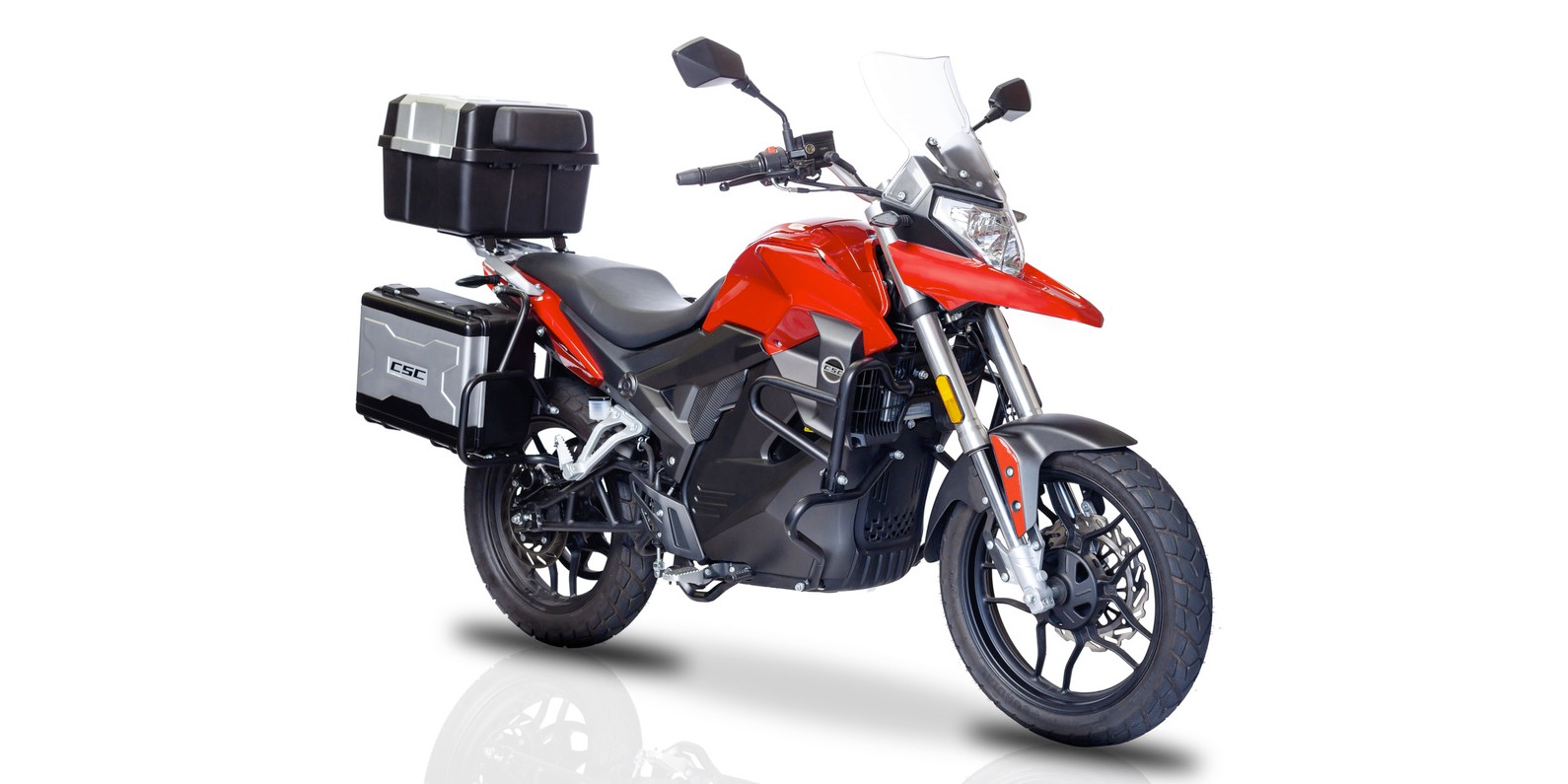 The bike takes a similar stance to the company’s gas-powered RX4 and RX3 adventure bikes but swaps the fuel-injected combustion engine for a liquid-cooled electric motor.

That mid-mounted electric motor puts out 8 kW of continuous-rated power and 18 kW at its peak. That’s a max of 24 horsepower but with a torque profile that will likely have you thinking it is significantly higher.

You won’t take anyone’s pink slip at the drag strip with that performance, but it’s plenty for an urban commuter that may see occasional highway jaunts.

Supplying that motor is a 6.16 kWh lithium-ion battery that is rated for 112 miles (180 km) on the NEDC (New European Driving Cycle). Charging is performed from a typical 110V home wall outlet. A full recharge is said to take 6 hours, but it will usually be faster in real-world conditions when you’re starting from a partially charged battery. Starting from zero means you pushed it home.

The CSC RX1E sports Bosch’s dual ABS brakes and a combined braking system for safety. While many bikes in this new wave of mid-power electric motorcycles use the left-hand lever for the rear brake, the RX1E sticks with convention by activating the rear brake with the right foot pedal.

Another nod to convention is the speedometer, which has an actual physical needle. I haven’t seen needle gauges on an electric motorcycle in years, but I much prefer them. They’re easier to read at a quick glance because the physical location of a bright orange needle will always be more legible than small digital numbers.

There’s still a digital readout on the display as well for the rest of the important information, but lovers of tradition will surely enjoy the return of a needle gauge speedometer.

The CSC RX1E’s inverted front fork offers 4.7 inches of suspension travel, while the rear mono-shock with adjustable preload and rebound damping is nearly there at 4.3 inches of travel.

The bike’s trio of luggage cases increases the storage already found in the faux tank, which looks like a gas tank but is actually a glove box.

The 30.9-inch seat height is fairly low and easy to manage, though throwing your leg over that top box may take some practice.

Set for deliveries in the spring of 2023, the CSC RX1E is available for pre-order in three colors: Candy Blue Metallic, Candy Red Metallic, and Charcoal Gray Metallic. (I guess no one eats gray candy.)

The MSRP of $8,495 is being knocked down to just $7,995 for those that put down a $500 fully refundable deposit in advance. There’s an extra $410 of dealer prep and documentation fees to factor in, though. Shipping is free if you want to come get it yourself in Southern California. For everyone else across the country, shipping will cost between $350 to $500.

Having experienced CSC’s bike delivery myself, I can tell you they come well packed and ready to ride straight off the pallet. There’s something kind of fun about a motorcycle showing up at your door in a box.

The CSC RX1E certainly isn’t CSC’s first brush with electric motorcycles. The company has spent decades dealing in gas motorcycles and scooters but decided to add electrics to its lineup in 2018 with the City Slicker light electric motorcycle. The 45 mph urban runabout is as easy to ride as it is on the wallet at just $2,795.

Somehow seeing the demand years before most other dealers woke up, CSC quickly added the economical 42 mph $2,495 CSC Wiz electric scooter followed by the steeped-in-nostalgia 32 mph and $2,195 CSC Monterey electric scooter. Check out my review of that last one below. Despite its slower speed, you’ll be begging to take a ride on one if you ever see it.

The CSC RX1E is the company’s first mid-power electric motorcycle, finally allowing riders to hit highway speeds on a bike they charge from the same outlet that powers their cellphone charger.

It joins a quickly growing crop of new middleweight electric motorcycles available in the US. Ryvid recently unveiled an eye-catching 75 mph model known as the Ryvid Anthem, which some see as an answer to the SONDORS Metacycle 80 mph motorcycle.

The Kollter ES1 with its 60 mph top speed has been available in the US for some time but is soon to be joined by the 80 mph Kollter RS1.

I was an early owner of the CSC City Slicker, only forced to sell it when I moved. I commuted all over Boston on that thing, winter and summer alike. I’ve had a blast testing the CSC Wiz and Monterey too.

And I have to admit that, despite my best efforts to convert her to electrics, my younger sister is a gas bike fan. But I at least convinced her to go with CSC’s SG250 cafe racer as an affordable entry-level gasser. It’s a rare day that I’m on a gas bike, but when I am, it’s probably her SG250.

I can absolutely see the RX1E in my garage. It’s got everything I’m looking for, with a big battery (relatively), high top speed (again, relatively speaking), and a nice design to boot. With the same size battery as an entry-level Zero and perhaps only a little less power (but at least a liquid-cooled motor), it’s a tempting comparison at several thousand dollars less, considering that simple things, like its LED lights and turn signals, would be a multi-hundred-dollar upgrade on a Zero. And don’t get me started on how much it would cost to add three hard-case storage boxes to a bike. I can’t believe this stuff comes standard.

It’s nice to see that the CSC RX1E’s range is tested according to some standard (in this case the NEDC). However, the NEDC is a bit outdated and often doesn’t match real-world riding. Based on my experience on electric motorcycles of this size, that 112 miles of range is only going to be possible at city speeds. Even so, though, you can still go quite far, even with short hops on the highway. As a commuter bike, 6+ kWh is plenty for someone that plans to charge at home each day. Many commutes could go several days without charging.

Long story short, this is very interesting to me. I was about ready to get in line for a Ryvid Anthem last month when it was unveiled, but I just couldn’t justify paying the full nearly $7,800 a year in advance. But for just a $500 deposit for spring 2023 delivery… oooh, I’m dangerously close to taking my credit card out, folks.