The Wiz electric scooter is a quick and sporty two-seater designed for tooting around cities and suburbs. And starting this week it will be making deliveries to reservation holders across the US.

CSC, the Azusa, California-based motorcycle dealer that first brought us the ridiculously affordable $2,495 City Slicker electric motorcycle, is back with a new electric moped.

Known as the Wiz, CSC’s newest electric vehicle follows in the City Slicker electric motorcycle’s footsteps. It’s a zippy little bike with enough power to haul two passengers and with enough speed to feel comfortable on just about any city road and even some local highways and state routes.

The CSC Wiz electric scooter is listed as having a top speed of 43.5 mph (70 km/h). However, CSC owner Steve Seidner told Electrek that they’ve seen riders achieving speeds of around 45-50 mph (72-80 km/h) depending on rider weight and terrain. 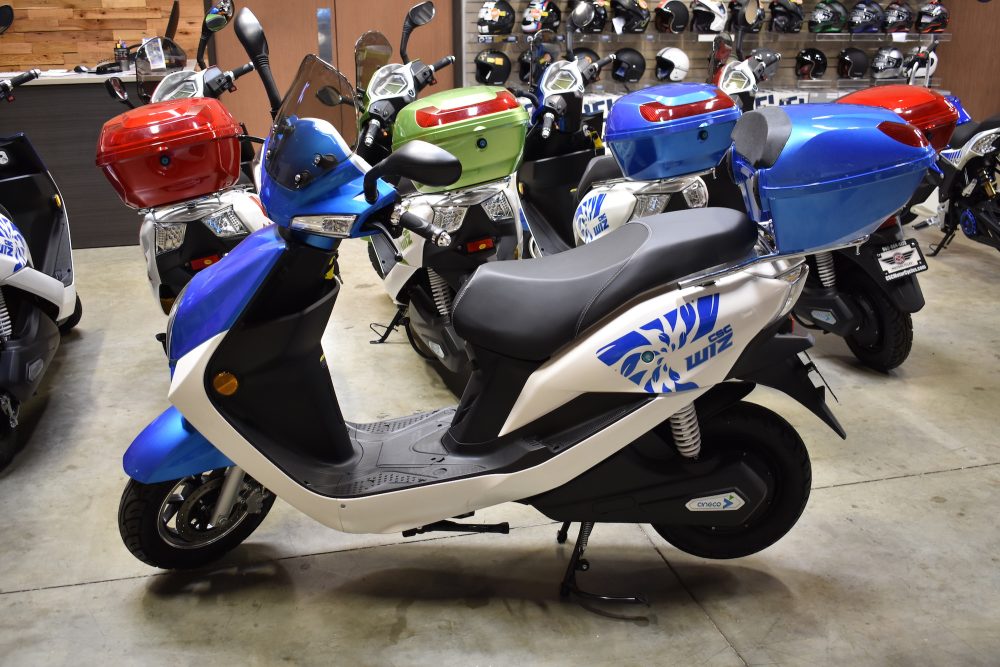 That puts its performance close to the City Slicker electric motorcycle that we reviewed earlier this year.

And with just under 2 kWh of battery capacity, the range falls somewhere in the 30-40 mile (50-65 km) ball park. That’s enough for most city commutes. And considering that the Wiz only costs $2,495 (plus another $350 or so in inbound and registration paper fees), that range isn’t too shabby. There are a lot of electric bicycles that cost much more and struggle to reach that kind of range.

We caught up with Steve and this is what he had to say about how the new Wiz electric scooters compare to CSC’s original electric motorcycle:

“We took a City Slicker and a Wiz to see how they compared to each other. The City Slicker was faster off the line because of the new hot-rod controller but the Wiz caught up to it at higher speeds. The Wiz overall is almost the same in performance as the City Slicker.”

Despite having similar performance to the City Slicker, the Wiz has a few key advantages. It ships with a storage trunk that is capable of holding more than the small-ish glovebox on the City Slicker. It also serves as a back rest for the passenger, which can make them feel more comfortable.

When I reviewed the BloomScooter with my wife, she loved the small back rest on the rear pillion seat because it helped her not feel like she would slip off when I gunned the throttle.

The Wiz is also a step-through design like most scooters. That means riders and passengers don’t need to throw a leg over the bike to mount it, and it is much more dress and skirt-friendly.

In fact, Steve says that the Wiz has proven to be surprisingly popular with female riders looking for an electric moped:

“Customers are very excited about the Wiz’s step-through scooter style, and a lot of people who have the City Slicker are now interested in the Wiz for their wife.

Generally, there’s been a lot of interest from the female crowd on this bike.”

Customers who placed pre-orders after we first covered the scooter’s announcement back in May can expect their scooter to ship this week.

Gosh, I really loved the City Slicker electric motorcycle and I considered it to be one of the best urban electric motorbikes available.

But this new CSC Wiz electric scooter is sure going to give it a run for its money and I’m wondering if I should upgrade. While the City Slicker is a bit sportier and offers the fun sport bike crouch, the utility of the Wiz is really enticing to me. Plus I know my wife would love riding on the back more than she did on the City Slicker. In fact, I could even see her taking the Wiz out on her own.

I think that step-through electric scooters like these are going to be a big part of getting more Americans onto two-wheeled EVs. They offer more power and road presence than electric bicycles, but are cute enough to avoid scaring off potential riders who might think “I could never ride a motorbike”. Basically, I think the Wiz and e-scooters like it are a great Goldilocks solution. They aren’t too fast or too slow, too powerful or too weak, or too big or too small. They’re juuuuuust right.

What do you think of CSC’s new electric scooter? Let’s hear your thoughts on the Wiz in the comments below.