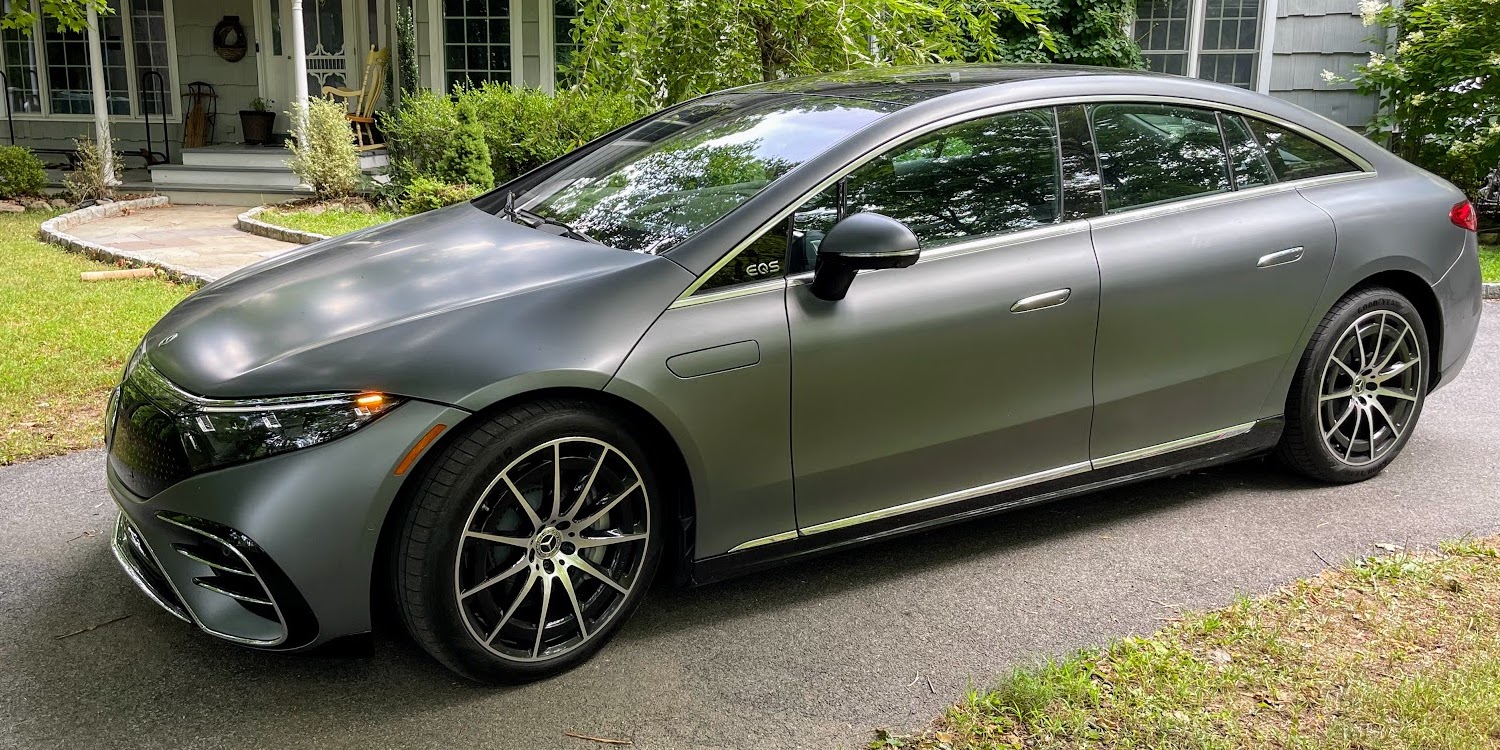 I got to spend almost a week with the Mercedes EQS as my daily driver and it sure was interesting to see what it was like owning a $130,000 car. One thing’s for certain and stood out however, electric propulsion takes luxury to a new level. In fact, at this point, I’d be reluctant to call anything with an internal combustion engine a luxury vehicle. Here’s why:

The EQS is just a nutty car. You don’t even need to step inside the $100,000+ behemoth to know there is a lot of extra stuff going on here. While it kind of looks like a futuristic Honda accord on screen, in person it is a much more dignified and sleek silhouette with the lowest .20 drag coefficient of any current production car. Mercedes Aerodynamics wizards are clearly the best in the business here.

That slippery aerodynamic helps the EQS achieve 340 (350 for RWD 480 version, 277 miles for AMG version) miles of EPA range on its 108kWh battery. I think in this case, that’s conservative, especially in highway driving. In every instance when using AC and driving spiritedly I always got more miles than the car estimated.

The EQS is clearly a Mercedes and sort of part of the S Class line but it looks entirely different than the ICE side of the business, unlike BMW or Volvo for instance who swap drivetrains on familiar ICE cars to go electric.

After reviewing this car, I can no longer think of the S Class ICE vehicles or any of Mercedes gas cars, no matter how gaudy, as luxury items.

Reasons why Mercedes EQS ‘electric is the only luxury’

Here’s a quick breakdown of why EVs are so overtly superior to gas cars when it comes to luxury:

Luxury is also about futuristic and being forward thinking which is obviously EV.

Back to the EQS, interior

If the inside of the EQS is anything, it is roomy. The sheer enormity of the interior is hard to put into words. Add to that the ginormous “Hyperscreen” which his really 3 screens under the same glass that spans the width of the front of the vehicle. There is a dated Samsung tablet in the back which seems like a bit of an afterthought. If I’m Mercedes, I’d probably just put an iPad holder there and call it a day. That said, a control screen between the 2 front seats allows those in the rear to individually control their temperature settings.

What’s ironic is you don’t even have to look at the three big screens while driving because Mercedes includes one of the best heads up displays in the business. In fact, this is the first car that I preferred the built in mapping software to CarPlay/Google Maps and that’s because of the heads up integration – also it does look amazing on that huge center display.

It is easy to talk about the 5 different massage levels you can put into the front seats as a game changer. But after about 20 minutes, it became a gimmick. I suppose on long rides, the gentle massage may alleviate some back pain but it isn’t going to be on the checklist for my next car. Also I’d like to see about 10x more power in the massage. Way too gentle!

The trunk space is not tall but holds tons of groceries. There’s a false floor where the charging cables live and a few other items could probably be hidden down there as well. Both back seats fold back so you could fit a bike in here or more likely a ton of golf clubs. You could even do some luxury car camping. Glamping?

There’s no frunk and Mercedes won’t even allow their owners to open the hood to see whats inside. That’s a bit weird.

I think where the EQS differentiates itself the most is the drive. I’ve driven a bunch of luxury EVs and the EQS is easily the best luxury ride available. While the Porsce Taycan’s suspension is very sporty, and Audi’s GT tends to be softer, the EQS feels like you are riding on a pillow of air even when navigating speed bumps and potholes. The effortless EV drivetrain pushes everyone back into their plush seats at a very respectable 4 second 0-60. The AMG version will cut a second off of that.

Mercedes doesn’t allow its Level 3 Drive Pilot software to live on this version of the EQS but its Level 2 lane keep/cruise control is solid in my testing. Mercedes will continue to update the software here but I can’t help but think many drivers will want to wait for the hardware upgrades that will enable Level 3 driving later next year.

If you’ve got $130k burning a hole in your pocket and can appreciate all of the luxury amenities of the EQS, I can highly recommend the vehicle overall. It is both gorgeous and useful. I can’t think of a car I’d rather take on a long road trip.

That said, for me, a lot of the extras here feel a little gimmicky. Also, Mercedes software wasn’t top notch in terms of UI and effectiveness. I think these are areas where the company needs to do some soul searching to decide if they should allow tech companies to take over the center stack or go it on their own.

The EQS overall however is a modern marvel. Smooth, fast, and beautiful, pick all three.