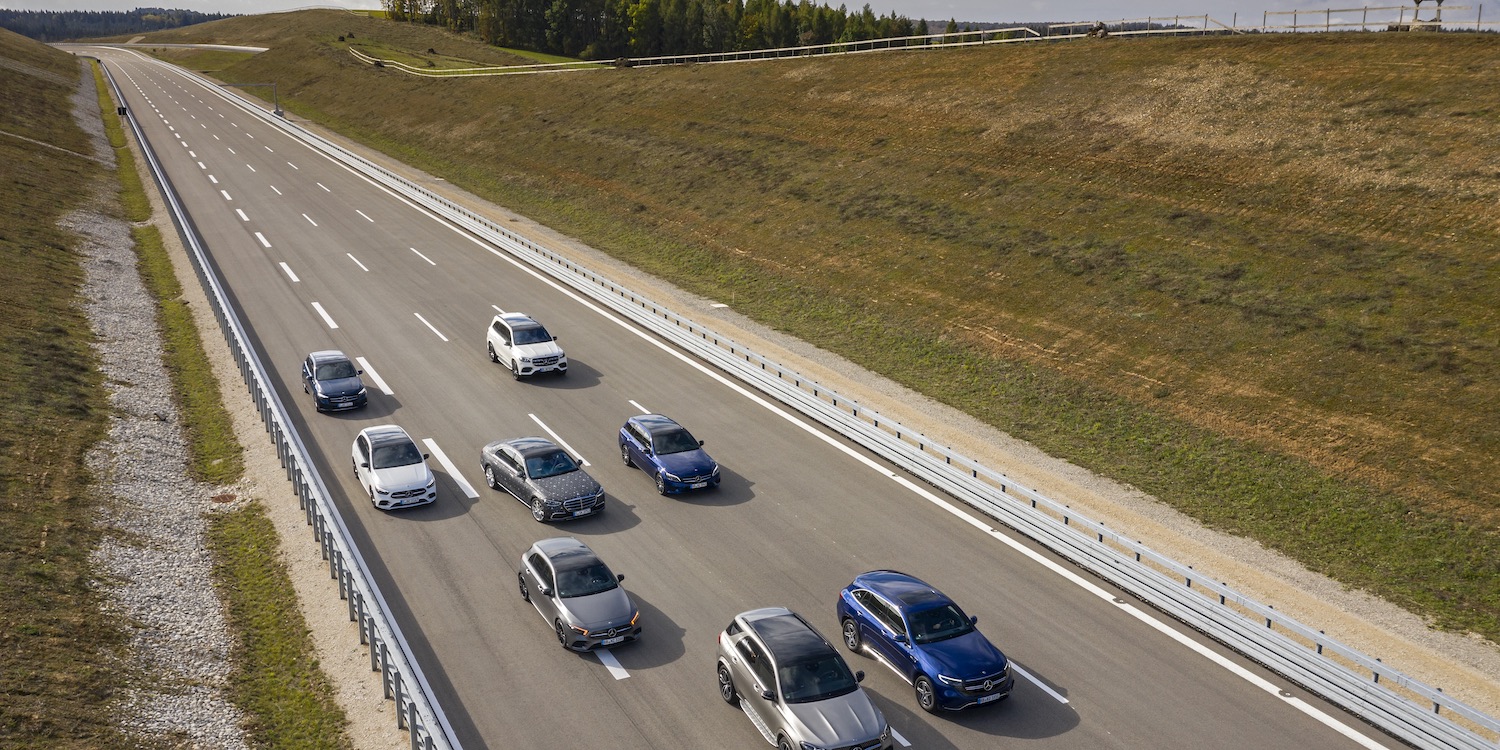 Mercedes brought us out to Stuttgart, Germany this week to check out the latest developments in their DRIVE PILOT Level 3 autonomous software and hardware. After testing other beta autonomy products, I found Mercedes’ latest software/hardware bundle to be quite…relaxing.

To set the scene, we were in Mercedes’ huge Immendingen proving grounds outside of Stuttgart, and all the vehicles in the test were either other Drive Pilot vehicles or choreographed test vehicles. I naturally chose to drive the electric EQS over the internal combustion S Class options.

Why not take us on real roads with real traffic situations? Mercedes says their level 3 autonomy isn’t yet certified on normal roads at higher speeds. Plus, they built an onslaught of tough scenarios that would have been impossible to recreate on normal roads.

However, I actually got to briefly test Drive Pilot on the Autobahn at the Munich IAA show last year in an EQS where there was a low speed construction zone. This allowed Drive Pilot to kick in at around 50km/h. The system performed well but it was hardly a challenge to sit in slow-moving traffic. Though that is one of the scenarios where Mercedes sees the most value addition, allowing owners to get some work done while commuting.

Tesla and other autonomous drive systems like Waymo and Cruise have taken different approaches, doing testing with customers on live roads. That’s not to say Mercedes isn’t testing on live roads, but for this demo, we were off to the test track.

At first glance, these Mercedes S Class and EQS vehicles look like stock vehicles you could buy in a showroom; however, there are some notable differences. The roof houses an incredibly accurate 4-GPS system/antenna that pulls from GPS (US), GLONASS (Russia), Galileo (EU), BeiDou (China).

The rest of the car is chocked full of sensors both internally and externally.

DRIVE PILOT builds on the surround sensors of the Driving Assistance Package and comprises additional sensors that Mercedes-Benz considers indispensable for safe conditionally automated driving. These include LiDAR, as well as a camera in the rear window and microphones, especially for detecting blue lights and other signals from emergency vehicles. There is also a moisture sensor in the wheel well. The S-Class with optional DRIVE PILOT also has supplemental steering and braking systems and a supplemental on-board electrical system. This ensures that it remains maneuverable even if one of these systems fails and enables safe handover to the driver.

In the test cars, there was also a high powered PC running off an auxiliary power system for monitoring the systems effectiveness. It really feels like Mercedes used every available sensor available here, in stark contrast to Tesla, which only relies on cameras/visual.

When the Drive Pilot system is in a situation where it thinks it can take over, the two buttons on the side of the steering wheel illuminate in a turquoise light similar in color to the Electrek logo. Mercedes says the aqua color stands for intelligence, and we’re obviously in full agreement there.

When you push the button, an animation on the driver display and the heads up display shows what is happening. Here’s a video of the experience I had:

While Drive Pilot is operating, you can do a variety of tasks like catch up with email, watch videos, or browse the web. Remember this is level 3 ,so there is no requirement for hands to be on the wheel nor eyes to be on the road like L2 systems. But Drive Pilot does need to see your face, or it will freak out as I demonstrated above by accidentally holding the camera over my face.

Out of all the technology bells and whistles of this system, the one that felt like the most advanced was the heads up display coupled with the augmented reality. You can partially see this in action from the beginning of the driv,e but I can say the display is much more bright and immersive in real life.

The AR mostly replicates what is on the display behind the wheel, but when it is overlaid on the real traffic, it really inspires confidence that the system knows the situation and how to react. Drivers can see the moves Drive Pilot wants to make before they happen, so the driver isn’t surprised.

When is Drive Pilot coming, and to which cars?

In 2021, Mercedes was the first automaker to get full international certification to run Drive Pilot on public roads. As for the US, Mercedes will apply to use Drive Pilot in California and Nevada in early 2023 and hopes to have permission to do so in mid-2023.

Unfortunately because of the hardware requirements of Drive Pilot, it will only be available on high-end Mercedes products like the S Class and EQS lineup.

The demo was fantastic, and I feel like I have a whole new level of respect for the Drive Pilot platform. We were put through a rapid fire array of real world situations which the modified EQS and Drive Pilot handled admirably. But, yes, this was all an amazingly choreographed demonstration.

Obviously, let’s reserve judgement until we see how it does on the open roads – particularly US roads, where the lines aren’t drawn as clean as German roads, and there’s a lot more uncertainty and of course, poor drivers.

That said, the groundwork is laid, and there is a clear path to level 3 autonomy that I don’t yet see with GM’s Super/UltraCruise or Tesla’s FSD. Drive Pilot is smooth, accurate, and inspires confidence.

Mercedes isn’t going to stop at level 3 Autonomy, either. The company is already working on Level 4 systems like Park Pilot, which will allow the car to valet itself without a driver.

It is clear to me that Mercedes is in the proverbial Level 3 autonomy driver’s seat, and it wouldn’t actually surprise me if it hit its stated goal of Level 3 autonomy in the US by the middle of next year.