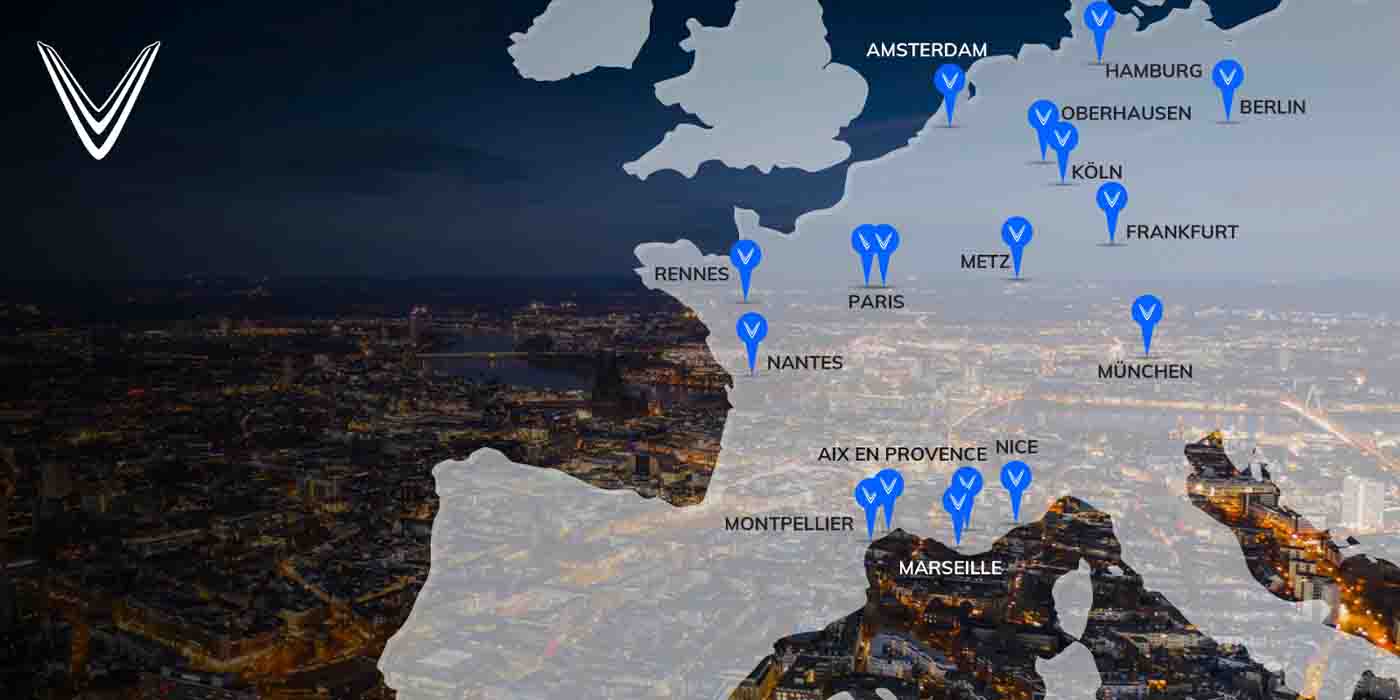 During EVS35 in Olso, Vietnamese EV automaker VinFast outlined its plans for expansion overseas, alongside the European debut of its VF 8 and VF 9 EVs. During the presentation, VinFast shared intentions to open at least 50 stores spread throughout Europe in countries including Germany, France, and the Netherlands to start. Additionally, VinFast shared new sales policies exclusive to those European markets.

VinFast is an automotive manufacturing subsidiary of VinGroup, a popular Vietnamese conglomerate developing everything from healthcare to theme parks. At the LA Auto Show this past fall, the public got its first glimpse of the automaker’s first two EVs – the VF e35 and VF e36 – which have since been rebranded as the VF 8 and VF 9.

At the time of these debuts, VinFast shared plans to enter markets in both North America and Europe ahead of the establishment of a US headquarters in Los Angeles. Currently, the automaker is manufacturing its EVs in Vietnam, although it shared intentions last March to manufacture on US soil in North Carolina.

The first two VinFast EVs to hit the US will be the aforementioned VF 8 an VF 9. The same now goes for Europe, which got to see them up close for the first time at this year’s Electric Vehicle Symposium (EVS) in Oslo, Norway.

The Vietnamese automaker announced the influx of 50+ stores set for Europe in front of a crowd at EVS35, which was followed by a press release outlining further details. To begin, VinFast has shared some of the locations for its first stores in Europe, which were strategically chosen to “optimize customer convenience”:

Similar to its US sales model, VinFast has shared European pricing for the VF 8 and VF 9, which also includes its battery subscription plan – each catered toward the respective market in Europe where the EVs will be sold.

According to the automaker, EU customers who purchase either of the first two EVs for sale in 2022 and 2023 can take advantage of a reward subscription policy that is attached to the EV for its entire life cycle.

Additionally, VinFast has announced an exclusive perk for European consumers who purchase their EV early. From June 1 to September 30, 2022, all EU customers who reserve a VF 8 or VF 9 will receive a complimentary year of VinFast Smart Driving with Level 2+ ADAS and Smart Services suite.

Announcement of VinFast Stores in French, German and Dutch markets affirms VinFast’s seriousness and commitment to Europe. VinFast is not just here to sell cars. We are here to inspire change and accelerate the transition to electric vehicles for the benefit of the environment. We are here to support every customer on their journey with VinFast, from reservation to their experiences throughout the vehicle life. We are confident that beside our reasonable pricing, product quality, innovative and flexible sales policies, our outstanding service will be the key factor to provide customers with excellent ownership experiences.

No word yet on when the first VinFast stores in Europe will open, but according to the automaker, they will vary in size and offer either EV sales-only, or sales and service combined. The VF 8 and VF 9 are available to reserve now.