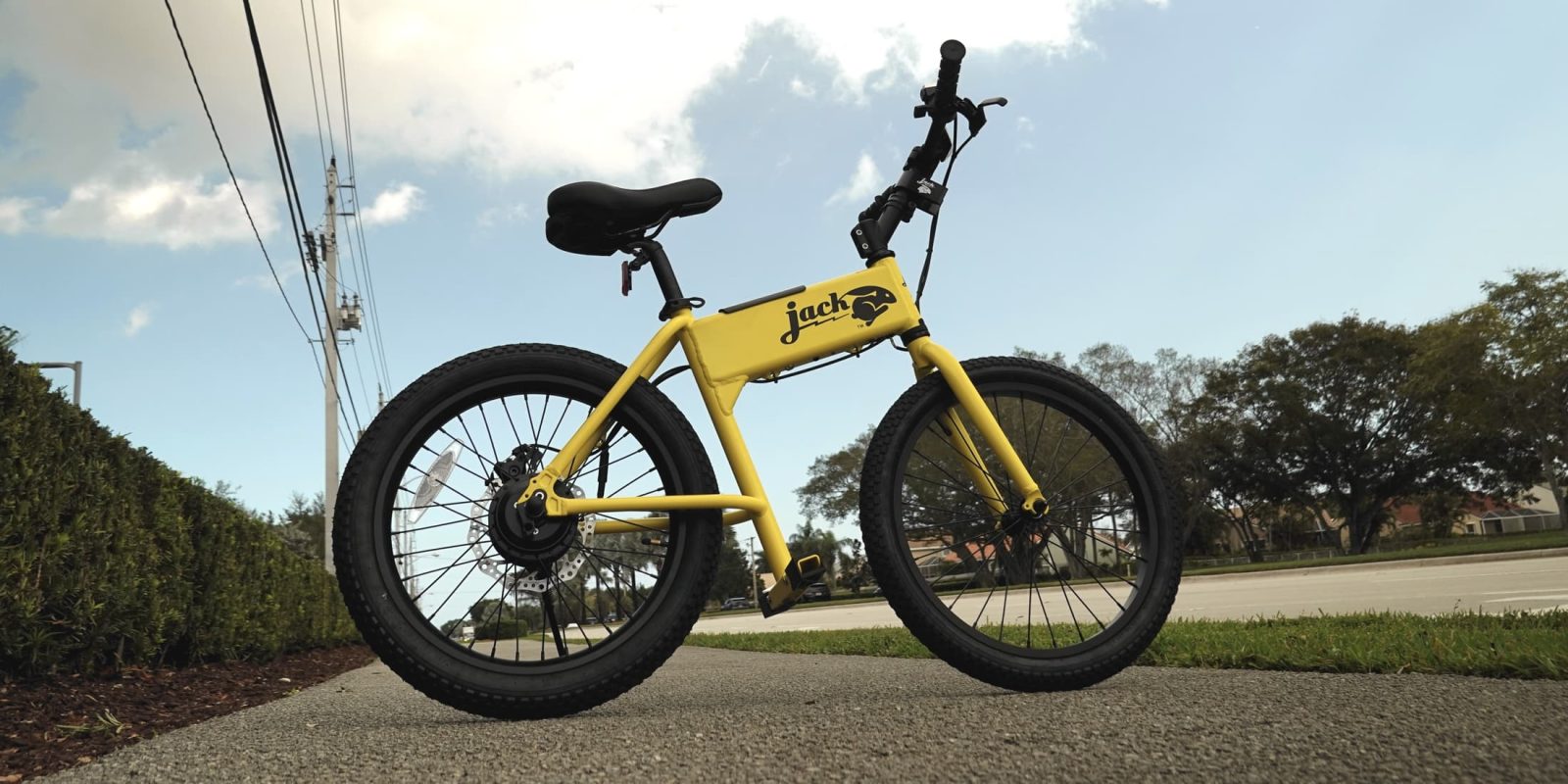 The JackRabbit is unique in a number of ways, from its electric bike-shaped design to its stubby proportions and even its surprisingly lightweight build. Now on a second version and thus technically known as the JackRabbit 2.0, this bright and eye-catching little electric scooter surprised me with just how much fun (and how effective) it is to use.

A lot of people will look at the JackRabbit and assume it’s a weird electric bike.

But the lack of pedals means it’s actually classified as a seated electric scooter.

There are small foldout foot pegs instead of pedals, but everything else from the seat to the handlebars and even the bicycle wheels pretty much scream “e-bike.”

Regardless of how you classify it, what really matters is how well it works. And I’m here to tell you that you can’t judge this book by its cover. It may look odd, but it’s an eerily potent little urban commuter vehicle in its own right.

Take a gander at the brief video below to see me testing out the JackRabbit in its native environment. Then read on for my complete thoughts on this category-busting little urban runabout.

Everywhere I go on the JackRabbit, the smiles invariably follow me. They come from curious onlookers as I whizz by, and half the time they come from me too as I’m reminded of how funny this thing must look under me.

But between the smiles and the thumbs-up from random strangers on the sidewalk, something dawned on me as I was testing the JackRabbit. It just didn’t matter how funny I thought I looked. What mattered was how much fun I was having. And the fact that I was zipping along at 20 mph (32 km/h) on an electric vehicle I could lift with one finger.

The JackRabbit is small, sure. And my 5’7″ (170 cm) frame fit on it just fine (though I imagine a 6′ dude would have a bit more awkward ride than me, despite JackRabbit saying it fits riders up to 6’2″).

And that’s exactly what this mighty-yet-mini little two-wheeler offers.

In back is a 300W continuous-rated hub motor that gets me up to speed quite quickly for its small size. That’s sufficient for flat land cruising and can get the job done on small hills, though I wouldn’t hold out hope for climbing any major hills.

The motor is wrapped in a 20″ wheel with a fairly thick 2.5″ tire. The front wheel is also 20″ but has a narrower 1.95″ width. The fatter rear tire makes sense since you’re basically sitting on top of the rear wheel.

The smaller 20″ wheels help increase the torque, meaning you feel the power more in the seat of your pants when you accelerate. The thumb throttle on the handlebars makes acceleration easy, and the single disc brake lever makes stops just as easy.

The disc brake is only on the rear wheel, and that seems like a sensible decision. With such a short wheelbase, front-wheel braking could be a recipe for disaster in an over-the-handlebars kind of way. But with seemingly 90% of the weight on the rear wheel, the single rear brake is effective at bringing the bike to a quick stop. The disc brake is strong enough to lock up the rear wheel and result in some epic power slides, and so you literally have more braking power than you need in that wheel (peak braking occurs at the point just before wheel lockup, so the goal in emergency braking is to get close to lockup without actually reaching it).

The JackRabbit is also pretty darn affordable at $999. There are cheaper e-bikes out there, but none this lightweight. At just 24 lb. (10.9 kg), this is one of the lightest e-bike-ish rides I’ve tried.

Because the JackRabbit isn’t going to give you the best power per dollar here, I’m not going to say I recommend it for those looking for high performance. You can of course get twice the power, twice the range, and more speed with something like a $999 Lectric XP 2.0. But that bike also weighs nearly 3x as much as a JackRabbit. So the beauty here is that you still get good performance at a seriously reduced sized and weight. That’s exactly what many urban riders are looking for in a city or campus e-bike/e-scooter. It also happens to be exactly what the JackRabbit was invented for: students on campus.

As much as I’ve enjoyed the JackRabbit, I’ve become keenly aware of two downsides in the design. The first is that there are no lights. I’d have really liked to see some included LED lights, especially since this is designed as a utilitarian get-you-to-school-or-work-then-back-home type of ride. That means you could definitely find yourself out after dark or before sunrise, depending on the time of year.

The second is that the battery is small. Like, really small. It’s just 158 Wh. The company says you can get 12 miles from it, but I found that you’ll be lucky to get 10 miles if you’re riding at top speed. And if you run out of battery, I hope you’re uphill from your destination since there are no pedals to help you get home on your own power. Though at least it only weighs 24 lb., and so pushing or carrying it won’t be too difficult.

The small battery and limited range do come with a surprising upside though. The 158 Wh battery is small enough that it fits under most airlines allowable battery size for carry-on. That means you could actually fly with the JackRabbit. And the small battery is cheap to pick up a spare. For just $199, you can get a second battery and double your range. The battery is so small that you’d probably not even notice the size or weight of a spare battery in the bottom of your backpack.

Look, I own a lot of e-bikes. But over the last few weeks, whenever I ran out for quick trips around the city I kept finding myself choosing the JackRabbit because it’s just such a hoot to ride.

There are downsides like the low range. But for what the JackRabbit is designed for, that doesn’t really matter. It’s not meant for someone with a 20-mile commute. It’s meant for someone with a two- to three-mile commute. It’s a lightweight, easy-to-use alternative that is way better than the bus, way cheaper than a car, and way more convenient than a full-size e-bike since you can pack it down so small. Even the folding e-bikes that I’ve tested usually weigh 2-3x what this one does.

Technically the JackRabbit is also called a “folding” e-bike, though it doesn’t fold in the traditional sense.

You can pop the handlebars off and snap them on the steering stem. The pegs fold up against the frame, and the front fork spins around to put the front wheel even closer to the rear wheel.

I forgot to spin the fork around in the photos below, but you get the idea. Picture it around four to five inches shorter and that’s effectively what you get. You can see it done more or less correctly in my video above at the 3:00 mark.

So while it’s not a traditional folder, it certainly gets nice and narrow for placing in a car trunk, sliding under a dorm bed, or hiding behind an apartment couch.

I would say that for a urban dweller or a college student trying to get around campus, the JackRabbit is an ideal vehicle. It’s small enough to bring inside with you to avoid getting stolen on the street like a bike, and its wheels are large enough to roll over road imperfections that would swallow up a normal scooter’s wheels.

There are some downsides, sure. And it’s funny looking, yes. But that’s all part of the charm.