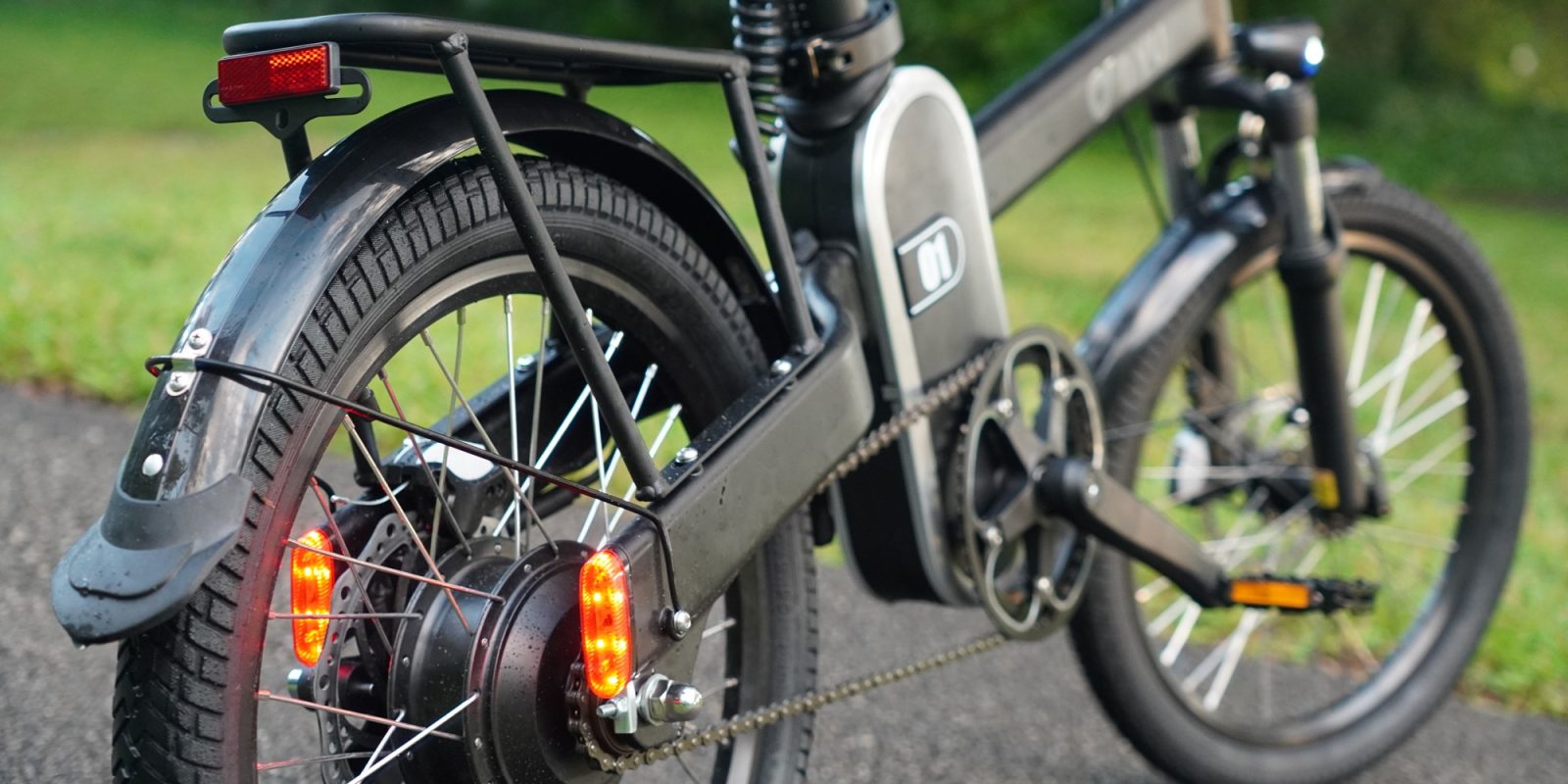 The DYU R1 electric bike certainly wins points for a unique design, but how well does it work? That’s exactly what I set out to find out when I began putting some miles on this interesting-looking e-bike a few weeks ago.

As a semi-folder with rather low battery capacity, the DYU is very much an urban-oriented electric bike. But when used in its element, it packs in a lot of convenience.

The handlebars fold down, though it doesn’t fold in the middle of the frame like a traditional folding e-bike.

That means you can still reduce the height of the bike to more easily fit in the backseat of a car or under a desk.

But when unfolded, the bike offers all the utility you’d expect of a 20″-wheel electric bike, complete with front suspension and a rear rack. There are even some interesting security features built into the bike.

Check it all out in my review video below, then continue on to read all of my thoughts on the DYU R1 e-bike!

A lot in a little package

The DYU R1 lacks a throttle, so this is a pedal assist-only e-bike.

Even so, the inclusion of a torque sensor means that the pedal assist actually works really well. It comes on responsively with almost zero lag from when you put pressure on the pedal to when the motor assist kicks in.

The single-speed nature of the bike means there’s no gearing to select from, and so I would have liked a slightly larger chainring to get a better top end gear ratio. Even as it stands, the bike still feels comfortable to pedal up to its top speed.

That top speed isn’t particularly fast though, as DYU stuck with the European and Asian limits of 25 km/h (15.5 mph). I played around with the display settings but couldn’t easily find a way to unlock more speed from it.

As a city bike, as long as you’re sticking to the bike lanes then the speed feels appropriate. The motor is only 250W, so don’t expect to be flying off the line or through the air on any massive jumps. The performance is acceptable, but this isn’t a rocket. You’ll probably get passed by a hipster on a fixie in the bike lane, but at least you’ll be pedaling a lot easier.

So if it’s not an e-bike for going fast or far, then what is it? In my opinion, this e-bike is a great little urban runabout. The integrated battery in the seat post is both convenient to remove for charging (plus prevents someone from stealing your seat while your bike is parked outside), and is lockable to the bike if you don’t want to bring the battery inside (and again, prevents someone from stealing your seat). The only issue with the seat post lock was it was occasionally finicky to get the lock and the pin lined up perfectly. In those cases, it took a few seconds of pushing the quick release lever higher or lower until the locking pin found its hole and seated itself.

There’s also a nifty little lock down by the rear disc brake that prevents the rear wheel from turning. That means someone can’t ride away on your bike. Sure, they could throw it in a truck (or over their shoulder, as it’s only 20 kg), but that will at least cut down on theft of opportunity from someone walking by and seeing a nice-looking bike.

Speaking of nice-looking, there are some cool features included in the design here. The tail lights are built into the rear dropouts, which looks like it belongs on a much classier e-bike. Granted, they didn’t design it as slickly as Harley-Davidson’s Serial 1 e-bikes with dropout-integrated tail lights, but you could also buy five of these DYU R1 e-bikes for the price of a single Serial 1. So there’s a trade-off, of course.

Between the good saddle and responsive pedal assist, the e-bike definitely gives a comfortable ride. For a daily use e-bike like the kind that city commuters need, that’s key. This isn’t meant to be a weekend warrior – it’s a daily errand-runner. And so it better be a nice ride. And it is.

I’d love to have seen some more battery built into it though. As nice as the ride is, a 180 Wh battery just isn’t going to last that long. 25 km (15 miles) is reasonable with pedal assist (remember there’s no throttle here and so the bike is actually quite efficient), though you could end up getting less if you stick to the most powerful pedal assist level all the time. And so I’d rather see a slightly bigger battery if possible.

I just don’t know how possible that can be with a seat post battery like this. It’s a cool design and all, but it sure is limiting on the capacity front.

At $999 though, how much more can you ask for? A torque-sensor e-bike with built-in lighting, front suspension, included rack and fenders, convenient seat post battery and other neat security features seems like a deal to me. If you need a faster or more powerful e-bike, then it doesn’t matter how affordable it is; the DYU R1 just won’t be for you.

But if you’re simply looking for an affordable, simple e-bike for the city that won’t take up too much room in an apartment, yet provides more features than the cheapest Amazon e-bikes, then DYU might just have what you’re looking for.

It’s a bit of an odd design, but the bike works quite well and offers good bang for your buck. That’s what I look for in an e-bike, something that gives me more than I expect at a reasonable price.

It won’t compete with the fancy-schmancy e-bikes, but it’s not trying to. It’s just trying to get the job done, and it excels at that.