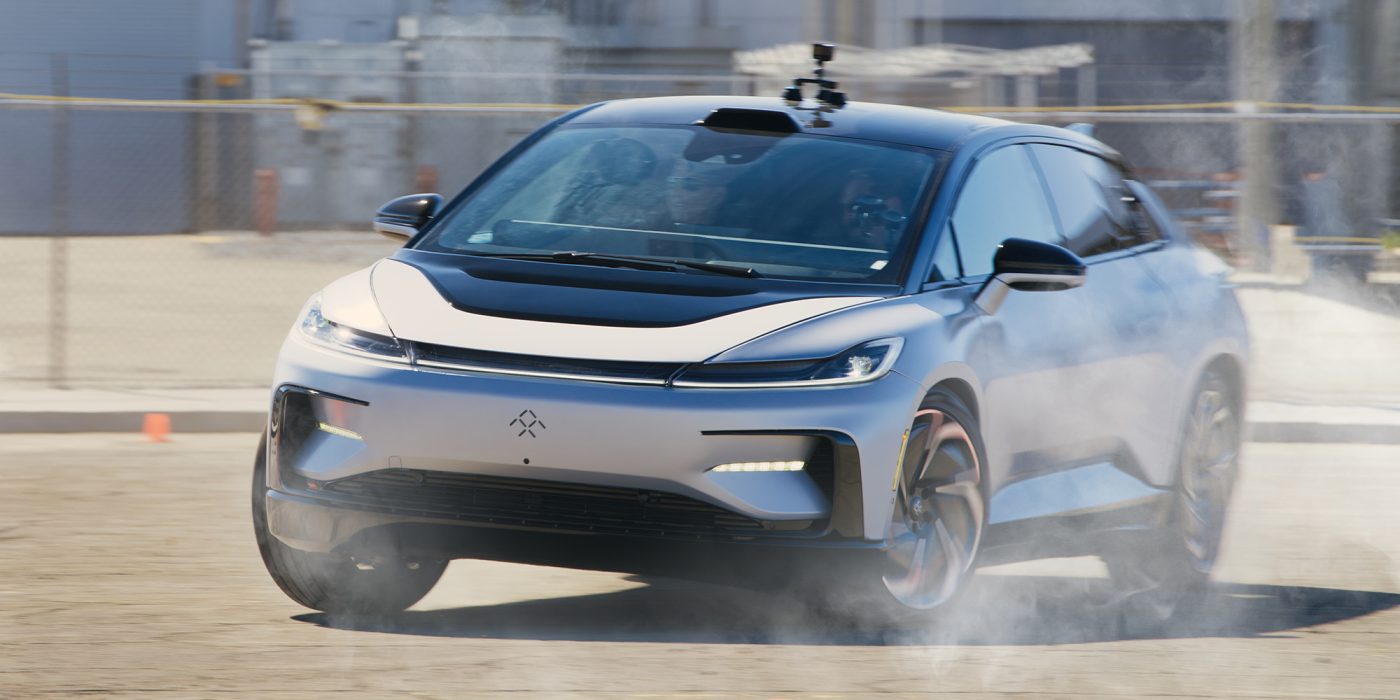 Southern California EV startup Faraday Future unveiled a pre-production version of its long-fabled FF 91 EV. This EV marks the beginning of pre-production ahead of engineering validation and certification testing, as the vehicle approaches the start of production in Q3 of 2022.

Faraday Future Intelligent Electric Inc. ($FFIE) was founded in 2014 in Carson, California, south of Los Angeles. In addition to designing and developing EVs like the upcoming FF 91 and its FF 81 sibling, Faraday Future (FF) also describes itself as an internet and technology company, an AI product company, a software company, and a user ecosystem company.

This news was followed by the announcement of its flagship production EV, the FF 91. By the end of 2017, FF’s CFO and CTO left to form their own company down the street, called Canoo. Financial ups and downs would continue to affect the startup, along with controversies involving layoffs, and loans. Eventually, Jia Yueting (also known as YT Jia) stepped down as CEO in 2019 after filing for bankruptcy.

Yueting remains chief product and user officer (CPUO), while former Byton CEO Carsten Breitfeld has since taken over as chief. Since then, the automaker has remained on track toward delivering the FF 91 to consumers, but that isn’t to say it hasn’t faced new adversity under Breitfeld as well.

Nevertheless, Faraday Future has continued development of the long-promised FF 91 luxury EV and has reached its latest milestone – a pre-production version it’s calling a “production-intent” FF 91.

Faraday Future is on track for Q3 2022 start of production

That timeline, as well as news of the production-intent FF 91, was relayed today during a livestream event from Faraday Future’s Hanford plant, alongside a coinciding press release.

Last fall, FF laid out seven milestones it would set out to accomplish in order to reach the start of production for the FF 91. Here’s what has been checked off its list so far:

That now brings us to milestone #4 – pre-production builds for final engineering validation and certification. Matt Tall, vice president of manufacturing at Faraday Future, spoke to the company’s latest victory, as it approaches extensive validation testing:

Building the first production-intent vehicle at the Hanford plant is an important step towards reaching the start of production in Q3. This iteration is the closest to the FF 91 production model we’ve seen to-date. The FF 91 is expected to be the first ultra-luxury EV to reach the market, with a unique driver and passenger experience.

According to the company, it will build more production-intent vehicles featuring production-specification components over the coming months. For those keeping score at home, FF still has three milestones on its to-do list following pre-production of the FF 91:

In addition to getting a good look at a pre-production FF 91 from the livestream, Faraday Future also took the EV for spin, accelerating on a straightaway followed by an autocross demonstration. You can check out the full 25-minute livestream presentation including words from Carsten Breitfeld and YT Jia in the video below. The FF 91 is available to reserve now.