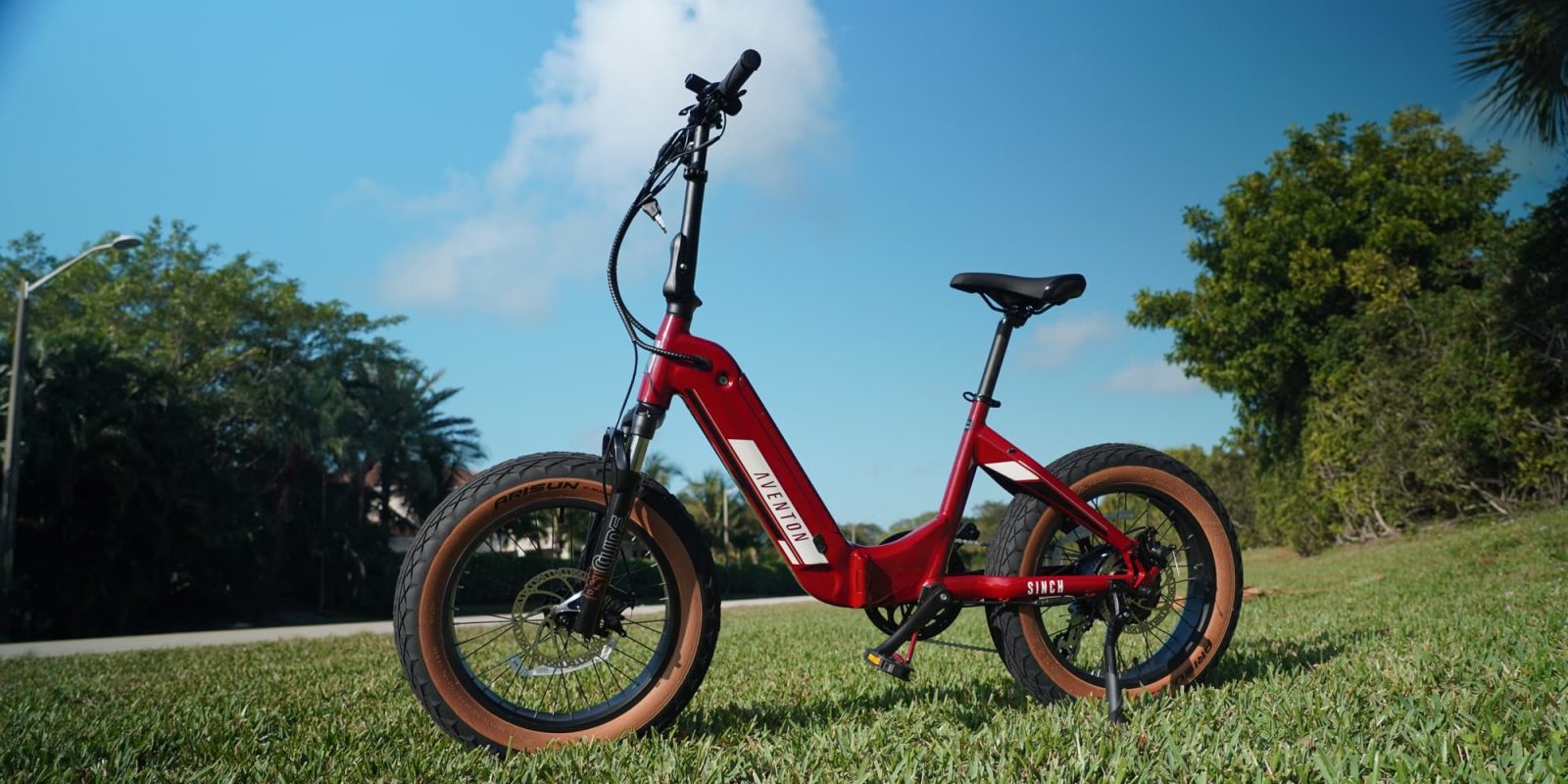 The Aventon Sinch was already one of the best-quality small-diameter-wheel fat tire e-bikes in the value category, but now it’s gotten even better. That’s thanks to a host of new upgrades from the company, including an ultra-comfortable folding frame with low step-through design that makes it easier than ever to quickly mount up and ride.

And of course Electrek made sure to have the first look at the new Aventon Sinch Step-Through, as I’ve been testing it out ahead of the bike’s launch today.

The new Aventon Sinch Step-Through is the easiest-to-use version of the bike yet, offering a compact and fun e-bike that can get you to work or traverse the local park – no trails or pavement necessary.

Fat tire electric bicycles are tons of fun for riding over all types of terrain, but their massive size usually makes them hard to transport when they aren’t being ridden.

Folding fat tire bikes are more rare, but they seriously open the door to new possibilities such as tossing your fat tire bike in a smaller car trunk or backseat.

And for city riders who don’t need to transport their bikes in car, the ability to fold means it takes up less space in a small apartment, perhaps fitting in a corner or under a desk. Plus, those fat tires make quick work of potholes and other urban obstacles.

Check out the new Aventon Sinch in my test riding video below.

The folding step-through frame is the most eye-catching of the updates to the Sinch Step-Through, and I love it.

It makes hopping on and off the bike a breeze since you can just step right through the center of the ultra-low frame.

Plus, Aventon always delivers a quality, well-made frame with expert welds on all of its models. I’ve yet to test an Aventon bike that didn’t look like it was just as beautifully constructed.

A quick way to tell if an e-bike company cares about the quality of its frames is to look at how messy or clean the welds look. It won’t tell you the whole story, but it will let you know if they slacked off on using some cheap-o factory that didn’t want to pay enough for better welders that know how to do it right. And Aventon’s superbly filleted welds show how much the company cares about getting it right.

But as nice as the frame is, there’s so much more to see here.

The new battery is much easier to remove for charging, popping right out of the center of the frame without the need to fold the bike to access it.

The new tires offer better street performance (which, let’s face it, is where most of us spend most of our time riding). And they’re elegant-looking tan walled tires, which I don’t see often but that I like the look of.

The new display offers the nicest screen yet on the Sinch and now integrates with Aventon’s app to offer ride tracking and vehicle monitoring.

The updated thumb throttle is more comfortable, incorporating the version now used on Aventon’s newest models of e-bikes like the Soltera.

And the throttle now even powers from a stop, which wasn’t the case when I tested the original Sinch 18 months ago.

I’m a big fan of the adjustable height handlebars, since they allow you to really modify the geometry of the bike to fit your body size and ride style. I would keep them pretty high to give me more of an upright cruiser-like ride, but I can see some people preferring to leave them low and have a more tucked riding position.

The pedal assist and throttle both ease on rather slowly, ramping up the power over the first few seconds. That’s a programming decision by Aventon, and it’s one that I would love to be able to edit myself, giving me more instantaneous power for thrilling acceleration.

But their programming will surely make the bike last longer since it’s easier on the bike, battery, and motor. And most people that seek a more leisurely ride over a heart-pounding thriller will prefer the relaxed application of power.

The new tires ride as good as they look, offering a more road-friendly tread pattern. I still took the bike on plenty of grass and dirt trails, ensuring it could still handle the occasional off-road journey.

It probably won’t be as good for beach riding like when I tested the original Sinch with its knobby tires, but I appreciate the improved road performance. Not only does the road tread give a better ride, but it also improves the range when riding on the road.

And the range is already impressive. Compared to other leading fat tire folders, the Aventon Sinch Step-Through has nearly a 50% larger battery, meaning much more range.

I’ve always respected Aventon for providing true range ratings, including real-world testing data for each of the pedal assist levels. I don’t know of any other major e-bike manufacturer that does this, and it really helps the company stand out.

With an average of around 40 miles (64 km) of range if you’re using both pedal assist and throttle, or closer to 30-ish miles if you’re on throttle only, the Aventon Sinch Step-Through has enough battery to take you anywhere you’ll reasonably want to go.

The average of 40 miles of range with mixed riding is fairly accurate, but if you slow down, you’ll go much farther. I went on a 10-mile ride with my young nephews on their little bikes, meaning we were sticking to speeds of around 10-12 mph. Somehow I only used 10% of the battery, giving a theoretical extrapolated range of 100 miles!

The one thing I can’t believe Aventon left off were LED lights. They’ve been integrating tail lights into the frame on recent models, and they usually include a nice, bright headlight. It’s a bummer they didn’t put lights on the Sinch Step-Through.

At a price of $1,799, the Aventon Sinch is priced slightly higher than a few other fat tire folders in its class. But it’s also made better, comes from a highly reputable company and sports better parts.

So you pay a bit more to get a better product, which I find to be absolutely worth it in my opinion.

As someone who works in the e-bike industry and rides both leisurely and professionally, I have a lot of bikes.

But if I could only have a few e-bikes (it pains me too much to even imagine only having one), the new Aventon Sinch Step-Through would 100% be one of them.

It’s just too well made and awesome performing to pass up. And its newly improved rideability only makes it that much better.