Aventon Sinch review: One fat tire electric bike that is different than all the others 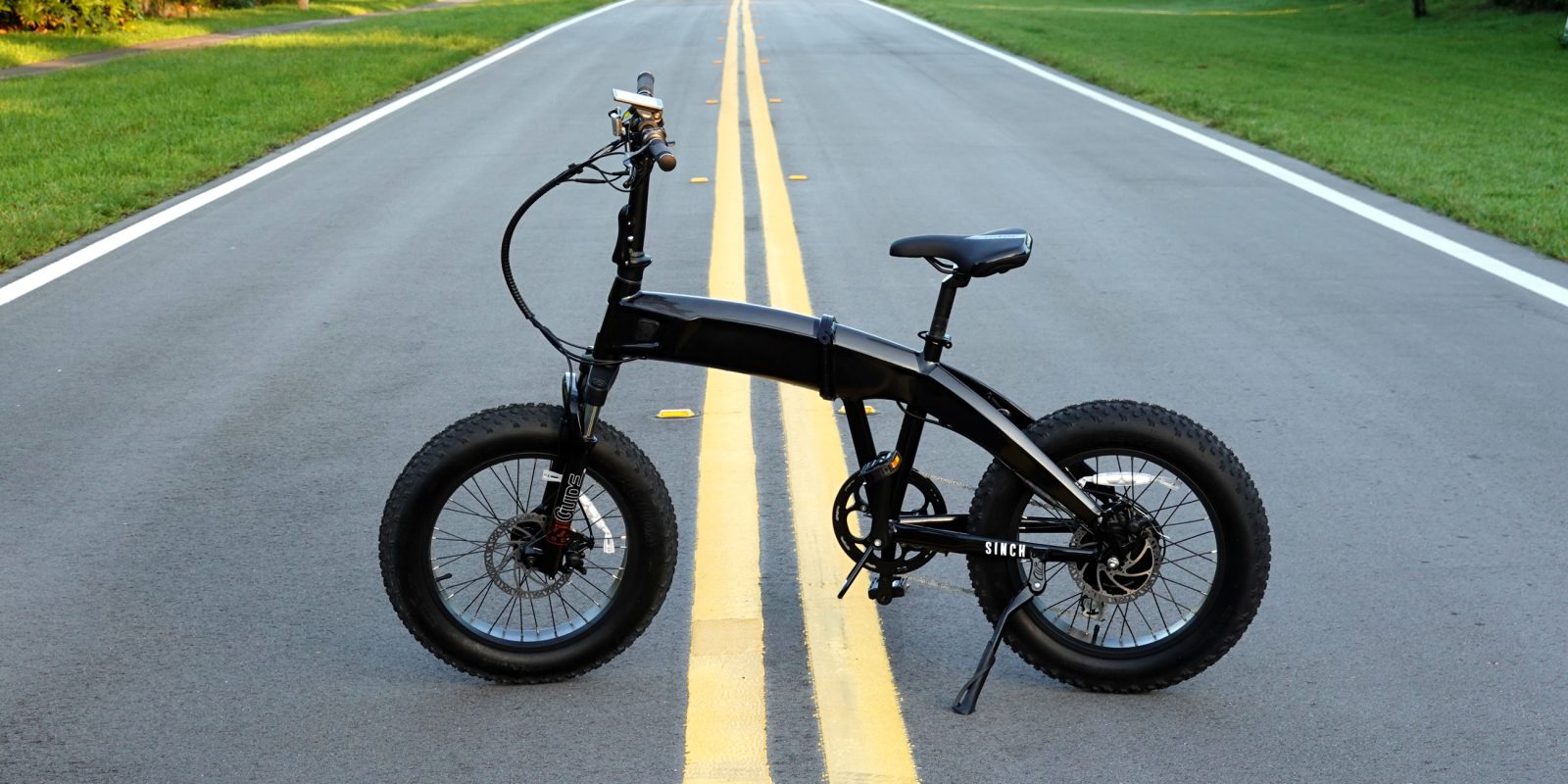 There’s just something about fat tire electric bikes that make them so much fun to ride. But it’s not every day that you find a fat tire e-bike that is as elegantly crafted as the Aventon Sinch.

This e-bike offers the unbridled joy of cruising around on ridiculously oversized tires yet without sacrificing any build quality. That makes it a top value e-bike for anyone looking for lots of bang for your buck.

Aventon Sinch e-bike, what is it?

Alright, buckle up folks. I’ve got a lot to say about this e-bike, but first I need to start with the big picture.

The Aventon Sinch is a folding fat tire electric bike. That means you can ride it just about anywhere including sand, dirt, snow, etc. But it’s also a rather small form-factor bike due to its folding nature.

With 20″ diameter wheels and a folding frame/handlebars, the bike can easily fit in just about any car trunk, allowing you to take it on trips or ride in areas further from home.

It has your standard US Class 2 e-bike specs, meaning it can hit speeds up to 20 mph (32 km/h) and peaks at 750 Watts of power. (There’s also the option to remove the speed limit on private property to hit around 24 mph). The Aventon Sinch also has a large 672 Wh battery that is conveniently hidden inside the frame to maintain the nice look of the bike.

What sets the Aventon Sinch apart?

Here’s where things start to differ from other fat tire e-bikes, as well as from other e-bike companies as a whole.

Almost no other e-bike companies do this. Most companies tell you “ideal range”. If Aventon did that, they’d tell you the Sinch’s range was 71 miles. But they don’t do that. They straight up tell you that the average range is 40 miles, and the true range can vary from 30 miles on throttle-only to 71 miles on low pedal assist level 1. Instead of putting their best (misleading) foot forward, they’re honest right out of the gate.

Next, very few fat tire folding e-bikes have internal batteries. The fat tires mean you need high power to get them rolling, which generally means you need a big battery. Big batteries don’t like to squeeze into small frames. And yet somehow Aventon has managed to do it. The Sinch’s battery locks inside the frame and out of sight, making the bike’s profile look better than pretty much any other folding fat tire electric bike I’ve seen. Sure, some other e-bikes have managed to achieve this, such as the Lectric XP. But in that case, the Lectric XP has both a smaller battery and also a much more industrial (i.e. less sexy) design. So props to Aventon for getting the styling right.

Lastly, and I don’t know why I saved this one for last since it is quite important and kind of a defining Aventon signature, the bike’s frame is so beautifully welded that it almost doesn’t look welded at all. It almost looks like a carbon fiber e-bike with zero mating lines or other manufacturing marks.

The welding has been finished so beautifully that it looks like the bike’s frame is just one solid formed piece. Which of course isn’t true, because it is made of welded double-butted 6061 aluminum tubes, but it just looks so perfect in every joint that you’d almost never know. You’ve got to appreciate that craftsmanship.

The good and the bad

Like any e-bike, there’s a combination of advantages and disadvantages here. I’ve already talked about what a straightforward company Aventon is and how well they’ve built their bikes.

I also really love how well the bike rides, how much fun it is to ride on both the street and trails/sand, and how much range I get out of it.

But if there’s one thing that bugged me constantly about the Aventon Sinch, it was the lack of throttle operation from rest. What I mean by that is when you want to get rolling, you need to get around half a pedal revolution in before the throttle can be activated. If you just push the throttle while the bike isn’t moving, nothing will happen.

The reason this annoys me is 1) I’m admittedly lazy, and 2) there are actual cases where I like to use throttle on startup. Those are usually when I get rolling in sand or other loose terrain, or when I start at the bottom of a hill.

Now, how big of a deal was this no-throttle-from-rest thing? Admittedly, not so much of a big deal. In sand, I just made sure I was in a fairly low gear and stood on a pedal to get rolling. With hills, it was basically the same thing where I just remembered to be in a low gear to get rolling. Plus I didn’t have huge hills to conquer anyways.

But one of the advantages of e-bikes has always been that they are more forgiving of being in the wrong gear since you can compensate with the throttle.

There is one other workaround that I did find, which is that you can use the “walk” feature of the Aventon Sinch to get rolling from rest, then switch to throttle. The walk feature activates when you hold the down button and gets the bike rolling at a few miles per hour. So if you have a leg condition and really need help getting rolling, that’s a nice throttle workaround.

And while I’m being nit-picky, it’d be nice if it came with included fenders and rear rack, though Aventon has those options as accessories that can be added.

Ultimately, the Aventon Sinch has been a wonderful e-bike that I can highly recommend.

On the performance side, it offers good speed, great range, nice power and a comfortable ride.

On the quality side, the bike is amazingly well built and comes from a reputable, honest company that is a pleasure to work with.

On the value side, it is priced at $1,499, which feels well placed in the market. There are other fat tire folding e-bikes out there for similar prices, but that don’t offer the level of fit and finish that the Aventon Sinch does.

Ultimately, there are a lot of choices out there. But you absolutely can not go wrong with the Aventon Sinch. It’s a beautiful e-bike that works well and should last the test of time.