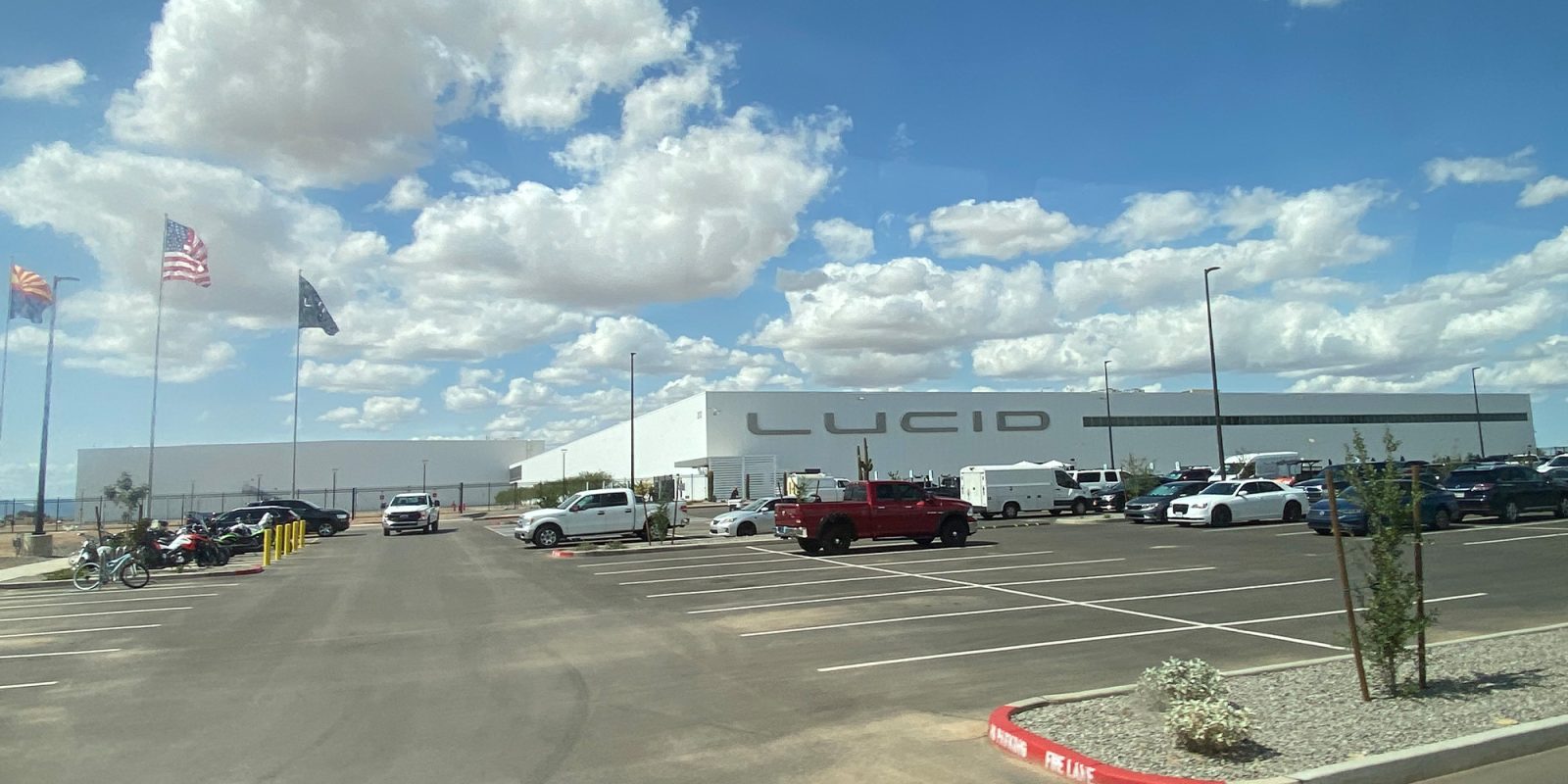 I recently had an exclusive opportunity to visit Lucid Motors’ powertrain manufacturing and AMP-1 facilities and test drive a Lucid Air Dream Edition (Performance). Inside and out of my detailed tours full of manic note scribbling, I had tons of time to mingle with members of the Lucid team, from manufacturing employees at AMP-1, to Lucid’s CEO himself. What I discovered was a company-wide focus on teamwork, efficiency, and the utmost quality – an ethos that is apparent when you view the Lucid Air sedan up close.

Update January 28th: Lucid Motors clearly feels strongly about the culture it has created and the talented individuals it employs, as the automaker has shared a new, five-part series showcasing five different employees. The new series, titled “Driving Ambition,” is now available to view on Lucid’s website and YouTube. You can also check out episode one below.

It was quite a spectacle in Casa Grande, Arizona, where for the first time, a large crowd of individuals not employed by Lucid Motors gathered within AMP-1’s heavily secured walls. Company CEO and CTO Peter Rawlinson popped up on the big screen shaking hands with Arizona governor Doug Ducey.

The two gentlemen then hopped into a pristine white Lucid Air Dream Edition, right off the end of the assembly line. Media, investors, and even early reservation holders looked on as the first customer-quality Airs rolled by. Behind me, the entire army of manufacturing employees cheered, capturing countless photos and videos.

After a near 15-year journey with plenty of ups and downs, Lucid Motors has begun production of its flagship EV. I spoke to VPs, design directors, and engineers who all played a tremendous role in getting the Air sedan to this pivotal moment, but none would take much credit.

Instead, each attributed their accomplishments to the leadership above them, to their own teams, and most importantly, to all of the employees working the manufacturing and assembly floors each day.

I saw a palpable sense of innovation and camaraderie everywhere that stems from the top down.

Some veteran members of the Lucid team told me that from day one, Peter Rawlinson has set out out to build an electric vehicle that could reach an apex in quality and performance, and never lost sight of that goal, despite the many hurdles that come with bringing a car to scalable production.

This devotion to innovation was clearly contagious. Each person I had the chance to speak with mentioned these same common goals.

You don’t need to socialize for two days like I did to get a feel for this company-wide focus, though. Lucid Motors’ Air sedan encompasses all of the hours (and years), innovation, and granular focus of every detail that this team, in all departments, has created.

Over 1,000 proud parents got to watch their first 520 Dream Edition hatchlings leave the nest in Arizona, as they begin to make their first tire marks on the EV market.

As part of Lucid’s “Production Preview Week,” Electrek was part of a small group of media able to tour the automaker’s AMP-1 assembly facility as well as its even more secure Powertrain Manufacturing plant up the road.

Unfortunately, phones were not allowed, so join me on a descriptive journey through what I thought was the most impressive aspect of Lucid’s Arizona footprint.

My first observation when entering the 20,000-square-foot powertrain facility was the dehydration chart in the restroom. As a “hydro homie,” I was elated to see that Lucid Motors is focused on keeping its team hydrated, especially in the Arizona desert. Huge props for hydration.

Upon actually entering the manufacturing floor, it was impressive how clear and open it was. As a rented facility, Lucid hasn’t put as much of an aesthetic design effort into the facility compared to AMP-1, but who cares? The focus here is purely advanced technology.

In addition to some mildly amusing rehearsed jokes from the duo, we were able stroll across the entire floor and see each step of the manufacturing process up close. The components manufactured here make up the core of the Air’s top tier performance, and are separated into three groups:

I found the power density of the electric drive unit (>9 hp/kg) quite fascinating since so much power has been put into such a small footprint, especially compared to a combustion engine.

Not to mention the bidirectional capabilities available on the Air, thanks to the Wunderbox. Having AC and DC available both in and out of your Lucid EV is sure to be a game changer for charging, and hopefully the new standard for more vehicles to follow.

On my way out, I saw a glowing sign on the wall noting that the facility has tallied 236 days without a “lost time accident.” It was a testament to how efficiently and strategically this company has been working to deliver the Air. Every second counts.

At AMP-1 about 15 minutes down the road, we were allowed to have our phones and cameras with us, although most of the tour was still off-limits for photos.

Upon entering, you first notice a little “Air museum” to the left, showcasing components hung on the wall such as the vehicle underbody. There are also jars showcasing the strength in simplicity by assembling the body in white using rivets and structural adhesive. Its only welded in two spots!

Looking around AMP-1, you can see the Air in its entirety, just in various pieces and levels of completion. Above us, a conga line of Airs sat patiently waiting to get dolled up inside Lucid’s advanced (and uniquely expandable) paint shop.

In speaking to various members of the Lucid team on the assembly floor during the tour, there was a level of pride and professionalism – even an adept swagger – as they talked about designing the layout of phase 1 or about how each Air body goes through a meticulous 100% scan before moving on.

Each person we spoke with had 15, 20, even 30 years of experience working at legacy automakers or other EV startups. The result is a team as savvy and as innovative as you can probably find, and that’s very on brand for Lucid Motors, as I learned.

Most of the assembly on the Air is currently loaded manually and assembled automatically using precise robot technology capable of working more efficiently and meticulously. This is a huge emphasis for Lucid and its vehicles whereas every rivet, line of adhesive, or interior component is implemented down to the fraction of a hair.

Currently, about 70% of the assembly process is currently automated, but Lucid plans to increase that percentage as it moves forward with its phase 2 expansion. The automaker has already broken ground on the next phase, and steel beams will start going up before the end of the year.

What was most impressive to me about AMP-1 was not the automated robots that effortlessly moved customer Airs from station to station by simply following a line on the floor, or even the technology tracking every single operation on the assembly of each Air, ensuring not a single checkpoint is missed. It was the infrastructural foresight Lucid Motors shared on this tour, building an assembly facility with three additional expansion phases already in mind.

Lucid Motors is currently building a majority of its vehicle components itself, but plans to take on even more as it expands its footprint in Arizona, helping ensure it can deliver the level of quality it is so clearly obsessed with. The powertrain manufacturing will soon make its way into AMP-1’s expansion as well, which is certain to be gigantic when complete.

Lucid will find success because of its people

After being shuttled around, shuffled through security checkpoints, and peppered with information with nothing but a pen and paper to defend myself with, my tour of Lucid had ended and I was able to enjoy some one-on-one time with much of the staff.

This included higher-ups with their design fingerprints all over the Air, like Senior Vice President of Design and Brand Derek Jenkins, and SVP of Product and Chief Engineer Eric Bach.

I also got to hang out with many of the manufacturing employees taking selfies and hugging one another in front of a new Air Dream Edition.

While details of some conversations were more granular than others, the energy and excitement radiated the same from each member of the Lucid team, no matter their role.

There was a gleam in each person’s eye when talking about the Air sedan, and my conversations were often cut off due to time constraints because pretty much everyone could talk about Lucid’s journey and future potential all day.

That says a lot about the culture that has been established at Lucid Motors and a team that has been to hell and back together. It’s a group that is just now seeing the early fruits of its profoundly efficient labor.

The veteran Lucid team that has been in place for nearly a decade now has successfully built a company ethos that promotes innovation and technology, in order to pursue luxury end quality.

It has not only given the rest of the team inspiration, but empowered them with a level of freedom to be creative in achieving Lucid’s design and manufacturing goals.

Lucid still has a long way to go before it’s a household name, but the groundwork is already there. (520 mile range and 1,111 hp on the Dream Edition should help, too.)

For now, the company and its employees continue to work tirelessly to deliver the Air, followed by the Gravity SUV.

Even so, they’re also already looking three, five, 10 years ahead. It’s a true testament to how poised the team is for a long run in the world of electric vehicles.