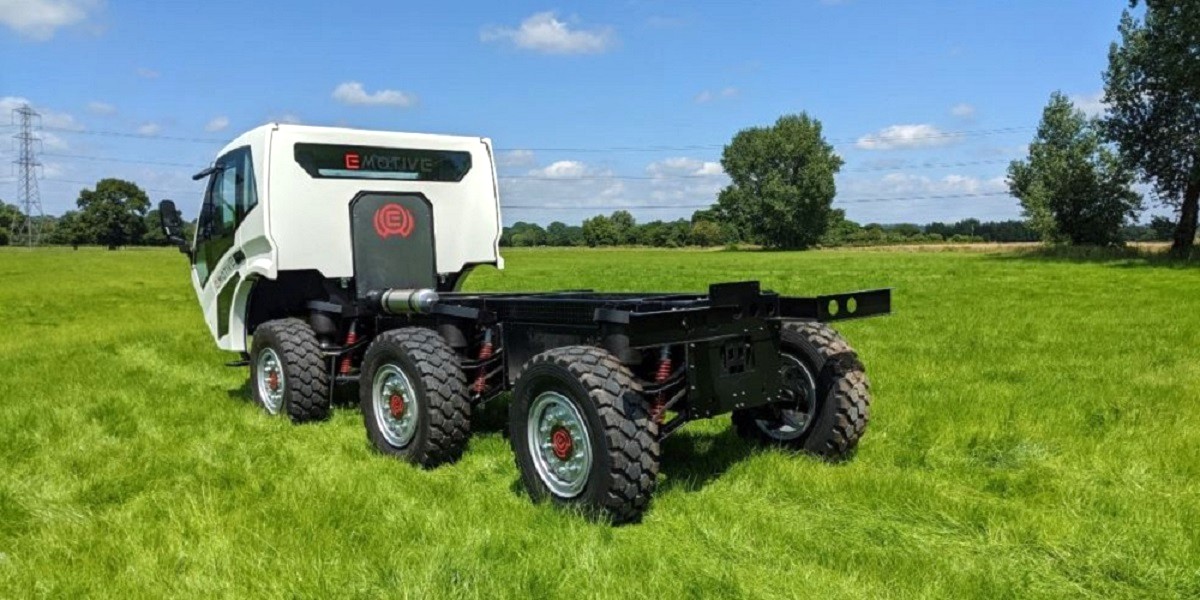 EMotive launched a £180,000 crowdfunding campaign to take its prototype 6×6 commercial vehicle platform into its next stage of development, where different component groups will be designed to enable it to effectively compete with the diesel-powered Mercedes-Benz Unimog commercial trucks that are ubiquitous throughout Europe and the UK.

“The UK government plans to phase out the sale of new diesel and petrol heavy goods vehicles (HGVs) by 2040,” reads the EMotive pitch site. “Our mission is to help by creating a zero-emission solution for industries requiring specialist vehicles such as Construction, Agriculture and Mining.”

Called the Scarab, the EMotive 6×6 concept is built around a “state-of-the-art” powertrain that delivers modulated torque electrically to each of the vehicle’s six wheels through a unique, “smart power delivery system.” The individual drive should allow for all the fun electric pickup tricks that are become de rigueur in the electric truck market, like crab-walking, rear-wheel steering, and tank turns – but, in the places where the Scarab might find use, these “tricks” might actually be needed.

The Scarab’s is a bespoke chassis architecture that’s designed to send pure electric drive to either two, four, or all six wheels as dictated by the customer’s requirements. It’s also designed to be modular enough to be able to use multiple means of getting power to the electric motors, including range-extending ICE engines or hydrogen fuel cells (similar to the Thor motorhome that debuted last week). To date, EMotive reports that it has invested nearly £2m in developing and prototyping the physical vehicle form and the design of its “smart” powertrain

EMotive might be a startup, but its team has a serious résumé that includes experience from Supacat, Flybe, and McLaren. The company’s engineers have also been involved in development work for Caterpillar, Lotus Cars, and the UK’s Ministry of Defence (MOD).

“Our technology has been developed to enable businesses to adopt a cleaner way of working … and put effective plans in place to future-proof (the customers’) all-terrain, medium-sized off-road commercial and adventure vehicles, while reducing fuel costs by a fifth,” EMotive founder, Bruce Palmer, told the Devon Daily. “Given that vehicles in our target market are currently responsible for 20 percent of all transport emissions, it’s only a matter of time before legislation is introduced to clamp down on ATV and off-highway internal combustion engine (ICE) vehicles, and that’s where our opportunity lies. That’s why we’re creating technology that puts us ahead of the curve.”

EMotive says its Scarab 6×6 vehicles are projected to cost less than two times the price of the current ICE alternatives already on the market, but says that it believes the added cost will be cancelled out by savings of up to 40 percent on, minimized vehicle maintenance, a lower parts cost, and reduced vehicle down-time.

These EMotive guys are a bit behind the comparably caveman Tundra Buggy, time-wise, but they’ve identified a market for their 6×6 chassis and are absolutely going for it with a lot of brainpower. Even if they just end up getting big in the UK with incentives for locally-built EVs, that will surely be enough of a payoff to keep them going, along with the inevitable spillover into Canada and Australia.