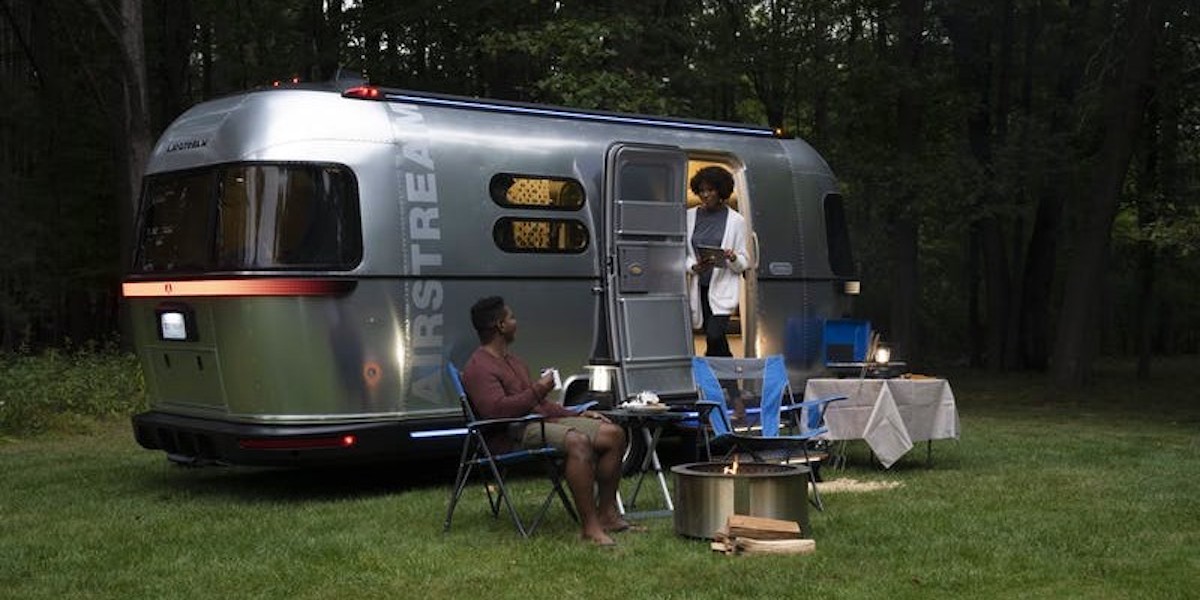 Thor industries just revealed its new electric Airstream concept, and made every other RV on the market – even the ones announced a few short hours ago – seem like antique relics of a distant past. The new “eStream” travel trailer revealed today is the iPhone on January 9, 2007, and everything else is … well, everything else.

We knew what was coming, we just didn’t know what was coming. Earlier today, Thor Industries – Airstream’s parent company – revealed a travel trailer that could power itself thanks to a “revolutionary” electric drive axle developed by ZF that eliminates range penalties on EV tow vehicles and improves fuel economy for conventional ICE haulers. We got that, as promised and on schedule… but I audibly gasped when I saw it rear up, Segway-style, and park itself next to a picnic bench.

You read that right. Using an Airstream developed app, the eStream’s electric motors can move the trailer around on its own power, making all manner of previously difficult (if not impossible) trailer parking maneuvers as easy as parking your car. Easier, even, if your car can’t park itself.

See for yourself, just five seconds into the launch video.

If there was any doubt before, there is none now. This latest RV from Thor Industries is a game-changer. You can check out some of the press videos below…

…as well as the “Towable Electric Drivetrain” explainer video, below this – but you’ll want to keep on reading, because we’re only halfway through the cool stuff.

As incredible as the eStream is, it was only one of two high-tech electric concepts shown by Thor. The second, called the Thor Vision Vehicle (or, “TVV”), is a motorhome powered by similar ZF-developed electric motors and the same high-capacity lithium-ion batteries as the eStream (just more of them). But Thor, unlike its competitors, didn’t target 120 miles of driving – it targeted 300.

To get to that 300 miles and beyond, Thor worked with the engineering experts at Roush to integrate a small, thoughtfully packaged hydrogen fuel cell that can provide the TVV’s electric motors with power, charge the TVV’s batteries, and power the “home load” of the RV far off the grid, eliminating a different type of range anxiety for more adventurous RVers.

We’ve been focused on an electrification ‘eMobility’ strategy for a number of years and have made substantial progress on our journey. Early on, we determined that success for us would not be to simply put our name on the side of an electric chassis built by a third-party electric chassis manufacturer,” said Thor CEO, Bob Martin, not-so-subtly referencing his competitor’s product. “Instead, as the industry leader, we harnessed emerging technology and co-developed flexible, scalable and customizable platforms on which our family of companies will build distinct products, providing a best-in-class RV user experience.

Looking for an even more savage, business-world burn that’s inflicted without mercy, quarter, or the slightest hint of irony? Like Winnebago’s 120 mile e-RV concept, Thor’s 300 mile TVV is also built on a Ford Transit chassis.

Other clever Thor features include digital camera side mirrors that cut down on wind resistance by removing the big RV side mirrors, but also provide a better user experience by being much more adjustable, with zoom features, to help navigate narrow spaces.

There’s another, rear-facing camera in place too that sends a digitally crafted picture to a rearview mirror-shaped monitor placed right where you’d expect a rearview mirror to be in your car, giving this motorhome a previously unheard of feature you probably take for granted if you’ve never driven a motorhome: a rearview mirror.

Alexa, fresh tech is along for the ride

Amazon’s Alexa app makes a few appearances in Thor’s launch videos and shows off tricks like setting some mood lighting and connecting a pop-up TV to Prime Video. Thor also talked about a new, proprietary trip planning app that would launch along with all its electric RVs that would help RVers find high-speed charging stations and minimize time spent standing still, while also allowing road trippers to plan for longer sightseeing/tourist trappy stops along the way to their final destination.

The rest of the interior is similarly software-focused, with a decidedly Tesla-esque feel to the dashboard and instruments. Thor redid the entire cockpit, in other words. This isn’t just a fancy box on the back of a Ford van. Check out that dashboard and the navigation app in this “Digital Cockpit Experience” video, below …

… and more of the fancy digital living space in this video.

To say that Thor dropped the mic on its competitors with its two electric concepts today is an understatement. These concepts are so far out ahead of anything else we’ve seen in that market to this point that it’s almost laughable. And, sure, this will be a high-end product that will probably cost double what “name on the side of a commercial van” motor homes will, but that same premium price tag hasn’t exactly hurt Airstream sales.

No – Thor gets it. The company knows the electric tidal wave is coming and isn’t not looking to survive it. Thor is looking to surf on it.