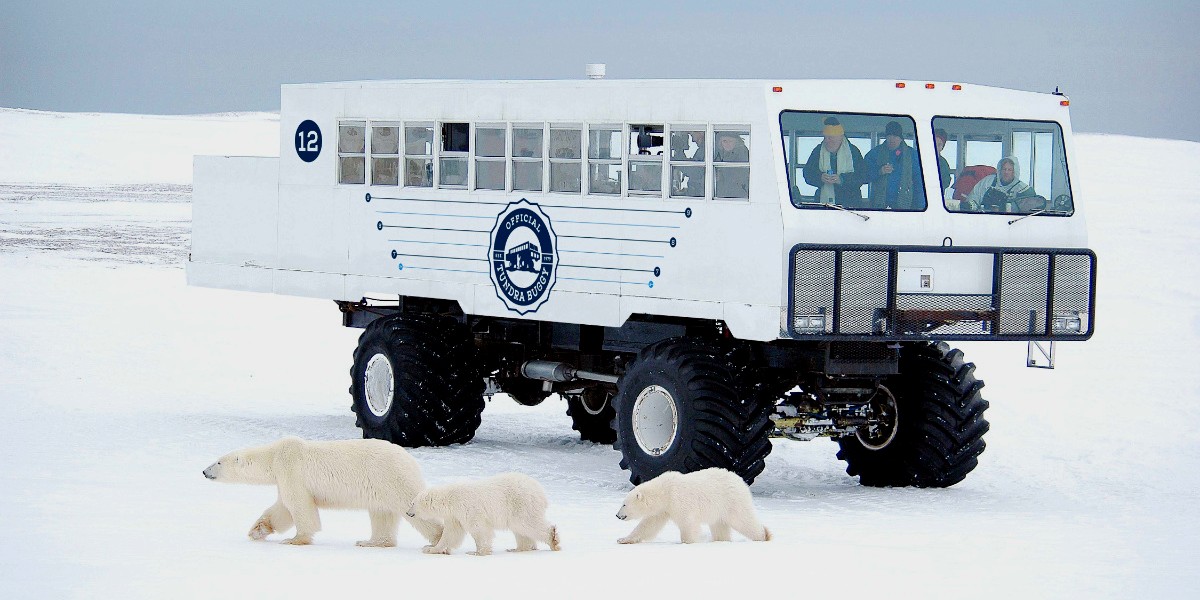 Thousands of eco-tourists travel to the community of Churchill, Manitoba every year to catch a glimpse of the vulnerable polar bears that convene along the shallow waters of Hudson Bay. Perhaps surprisingly, the “Tundra Buggy” that takes these nature-loving tourists out onto the ice has been diesel-powered … until now.

Frontiers North Adventures has announced plans to replace all twelve (12!) of its custom-built, diesel-engined, 40-passenger Tundra Buggies with zero-emission electric vehicles. Which, that’s all well and good – but who do you know that makes a 40-passenger heated off-roader that rides on 60 inch A/T tires?

Unlike other upfitting companies that can make a call to Ford and pickup an e-Transit van to convert, Frontiers North Adventures had to do a lot of the engineering for the electric Tundra Buggy on its own – no small task!

“The biggest challenge we had with the first vehicle is that it has never been done before. We were working with donated batteries, so we had to build our own systems and we had to do it all from scratch…so part of why it took so long is because we needed to figure it out,” explains Jessica Burtnick, manager, marketing and communications at Frontiers North Adventures. “What we’re kind of hoping is the second (Tundra Buggy) is going to be a little bit easier … [and] by the time we hit that that 12th Tundra Buggy we will have perfected it.”

The switch to electric seems like it will offer a number of benefits to the environment they explore and help insulate the business from fluctuating fuel prices. More than that, though, is the quiet that the electric Tundra Buggy brings with it onto the ice.

“We’re going to be able to make the vehicle fade into the background. We don’t want it to be the main attraction because, really, we want people to be paying attention to the ecosystem they’re in, the wildlife that’s in front of them and the stories that we share,” says Burtnick.

“Who we are as a company and our purpose is to share in the stewardship of the places where we operate. We’re in a very delicate ecosystem in subarctic Canada,” Burtnick told Electric Autonomy. “We wanted to see how we can make a meaningful difference in reducing our greenhouse gas emissions.”

Funding for the project came through Manitoba’s new Conservation and Climate Fund and the province’s Vehicle Technology Centre, in-kind support and technical services were provided by Red River College Polytechnic’s Vehicle Technology & Energy Centre, and the electric batteries used in the vehicle were donated by Winnipeg, Manitoba-based electric bus manufacturer New Flyer. The company expects the switch to electric buggies to reduce its carbon dioxide emissions by 3,600 tons over the next 25 years.

I’ve always been fascinated by glaciers, and an Alaskan glacier tour – something I saw advertised in the 80s – has turned out to be something I missed out on. They’re simply not there anymore, in the way they used to be. For now, the polar bears are still there, and I still believe that the best way to teach people to appreciate nature is to get them out into it.

As such, I absolutely love what the electric Tundra Buggy is about, and I will definitely try to make my way upcountry while there’s still something there to see.