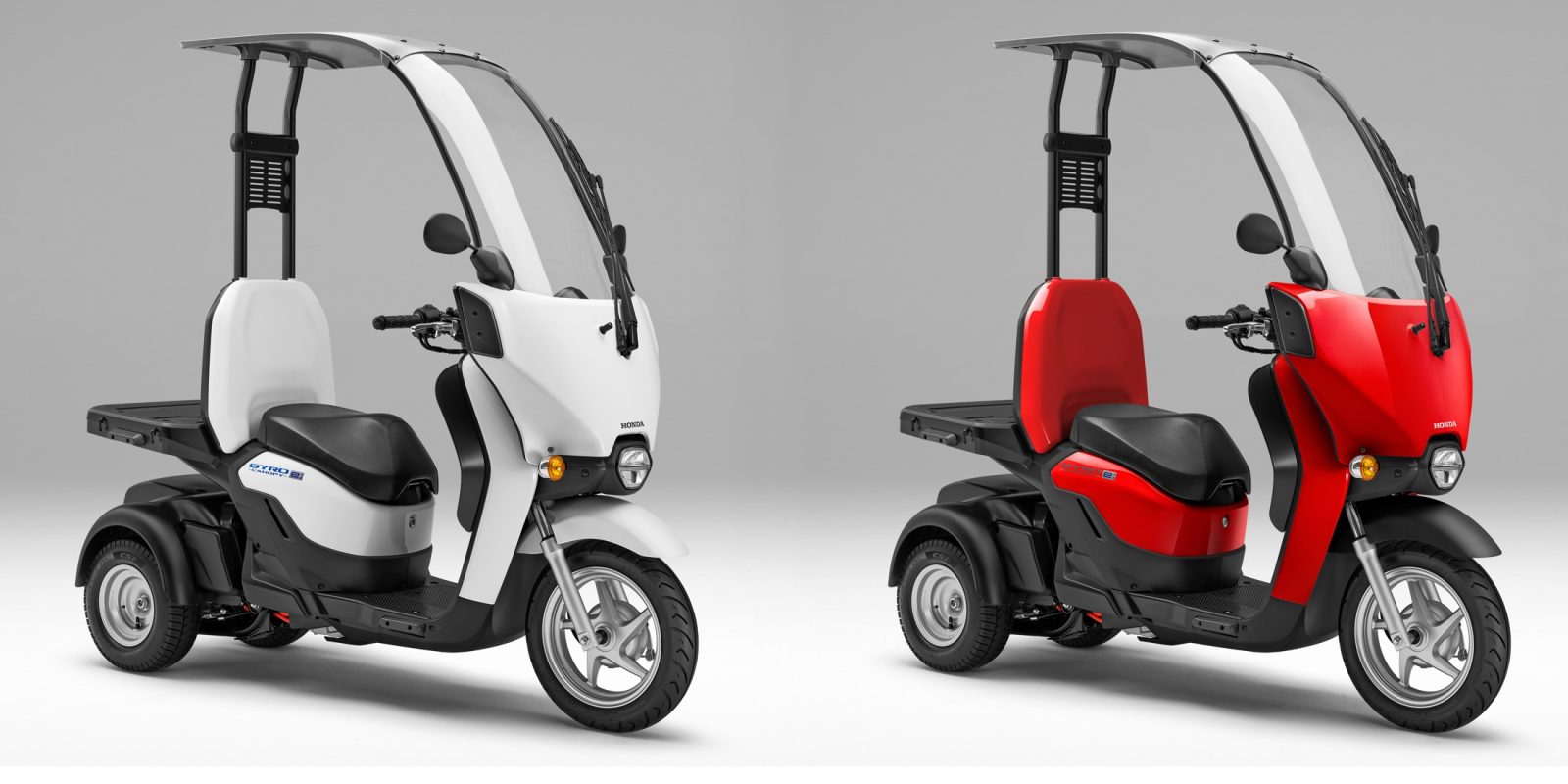 Honda may have dragged its feet on electric motorcycles and scooters, but it is now making up for lost time with a myriad of interesting new offerings. The latest is known as the Honda Gyro Canopy:e.

The Gyro Canopy:e takes the Gyro:e electric three-wheeler base and raises the roof – or adds one entirely.

Obviously canopy scooters can’t offer a completely dry riding experience, but when ridden at speed they tend to help shed most of the water that would otherwise soak a rider.

The Honda Gyro Canopy:e is powered by an electric motor that Honda lists with a peak power output of 3,200W but a continuous power output of just 580W. Sounds like there are some regulatory games being played there.

The scooter boasts a maximum range of 77 km (48 miles), though Honda admits that such a range is measured at a sluggish 30 km/h (18 mph). To be fair, that’s pretty much the speed of traffic in a lot of densely populated urban areas where these will be used.

The beauty of Honda’s system though is that it uses Gogoro-style removable and swappable batteries. Two of the batteries add up to a total of 2.6 kWh, and they can be swapped for freshly charged batteries once they are drained. The whole process takes less time than filling up a tank with gasoline.

Compare that to some of Honda’s low-cost electric scooters it has debuted recently. The Honda U-go (yes, pronounced like the infamous Yugo) electric scooter was unveiled earlier this summer for the Chinese market, where it was priced at around US $1,150.

Just a few weeks later, Honda lowered the bar even further with the introduction of the U-be electric scooter for just US $475.

Those scooters were much lower-powered models designed for consumers, while the Gyro Canopy:e offers more power for commercial users, plus ties into Honda’s swappable battery system.

It’s all fine and good (if not a bit expensive), but I want to see Honda make progress on an electric Cub more than anything right now.

The Honda Cub is the best-selling motor vehicle in the world. I understand that these commercial and utility vehicles like Gyro Canopy:e stand to replace a lot of gas-driven miles. And that’s great. But if Honda can land a successful electric Cub, that could make the company suddenly much more relevant in both Eastern and Western markets.

Imagine a return to the heyday of Honda motorcycles in the ’60s. A cool, fun, and efficient electric Cub could succeed on so many levels with today’s younger commuters that are looking for less Harley and more hurry.

Time will tell if Honda’s latest canopy electric scooter will be a success at this price. Until then, let’s hear what you think. Join me in the peanut gallery below to share your comments!