Check out these scary good Halloween deals on BLUETTI portable power stations up to $3,900 off 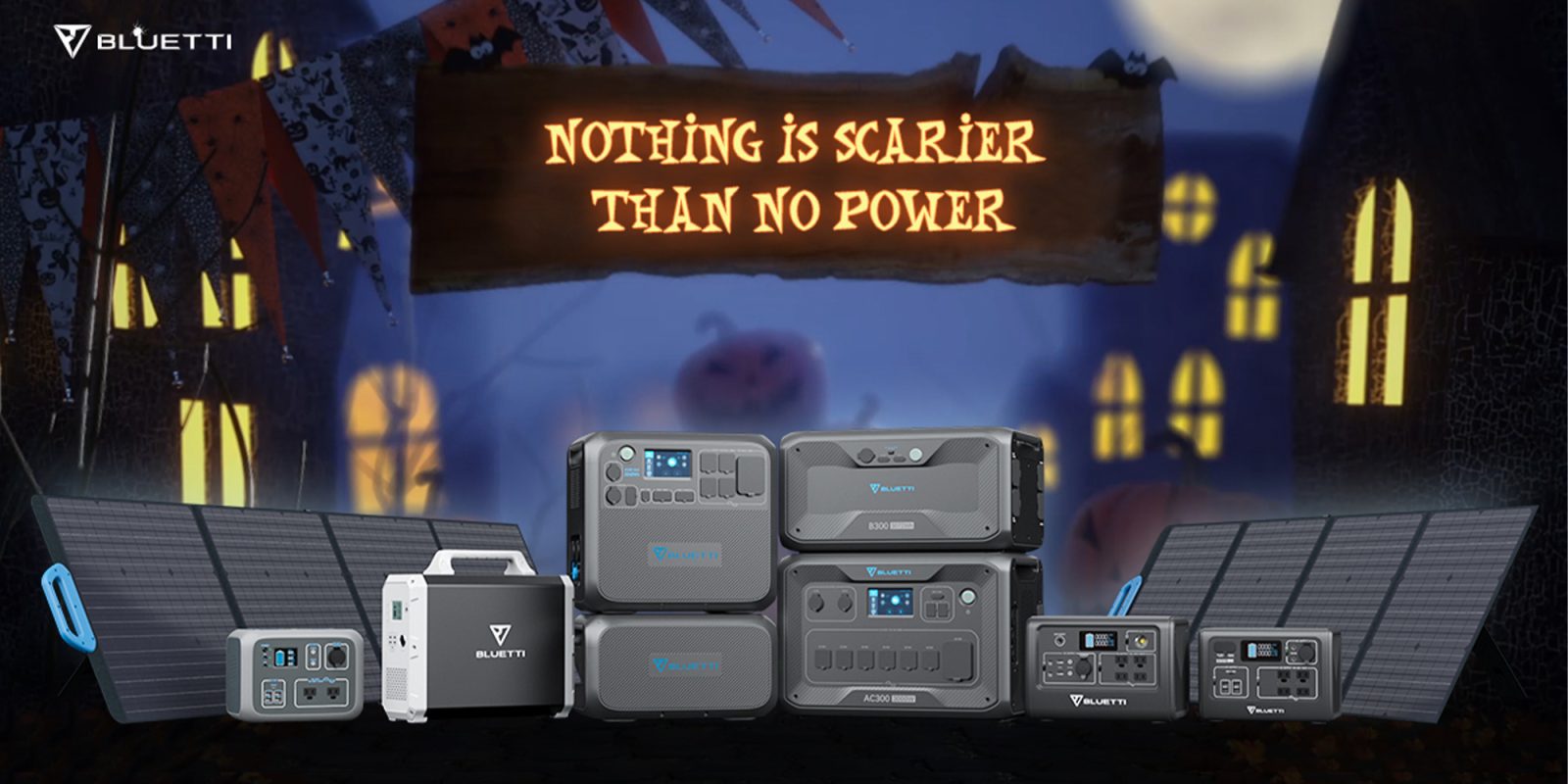 Portable power station manufacturer BLUETTI has announced a slew of new deals available for a limited time this Halloween. When things go bump in the night this fall, be sure you have enough power for all of your devices by utilizing BLUETTI’s battery and solar bundles, including a special pumpkin tone EB55 portable power station.

BLUETTI is back with new deals for Halloween

In case you weren’t already aware, BLUETTI is Las Vegas-based portable power manufacturer focused on providing resourcefulness and energy independence to its customers.

Since debuting its first products in 2019, BLUETTI now offers a digital storefront with tons of energy solutions, including power stations, solar panels, and other accessories.

This past September, BLUETTI launched its flagship 2021 model, the AC300 portable power station and the B300 external battery, which ended up quickly selling out.

Now, however, the AC300 and B300 are back just in time for Halloween, and BLUETTI has bundled them alongside a bunch of other deals to take advantage of through November 4.

AC300 and B300 specs and halloween deals

As part of BLUETTI’s Halloween special, you can take advantage of deals on the latest premium off-grid energy solutions, beginning with the AC300.

The AC300 is unique compared to other BLUETTI power stations in that it has no internal battery pack. The modular, adjoining B300 battery units hold 3072Wh each and can support the various outputs of the AC300 station.

With the ability to connect up to four B300 batteries at once, the AC300 can provide max energy storage of 12,288 kWh. BLUETTI’s AC300 uses top-tier lithium iron phosphate (LFP) cells capable of handling over 3500+ life cycles while still maintaining 80% of the original capacity.

BLUETTI explains that even if you put this station through one cycle a day, you should get at least 10 years of service life out of it, whatever bundle you choose.

Speaking of cycles, the AC300 is capable of receiving 2,400 watts of solar charging input, thanks to a 3,000-watt pure sine wave inverter that is able to adjust the AC charging rate.

If you connect two B300 battery modules, the AC300 can garner a simultaneous charge from both solar and AC, increasing the charge rate up to 5,400 watts. This can replenish the bundle’s 6 kWh of battery from 0~80% in one hour.

You can double the voltage power of your bundle further still by using BLUETTI’s Fusion Box Pro, which also doubles the power and capacity – 6000W, 240V, and 24,576 Wh.

Combined, this bundle is a beast delivering all the power you need off the grid. However, it may be tough to move on the go. Luckily, the 100% modular design of the AC300 allows all of these light components to be transported individually with ease.

If you’re thinking all of these power components might be difficult to connect together and manage, BLUETTI has you covered. All of this BLUETTi modular technology can be controlled using the company’s smartphone app via Wi-Fi and Bluetooth.

Let’s dig into the AC300 bundle deals BLUETTI is offering for Halloween:

BLUETTI’s 600W Solar Panel Combo offers 3,704 Wh of energy storage from 2 x B300 battery modules to deliver power with ease from your camper to any off grid hut.

Two B300 Battery Modules offer 6,144Wh of energy to the AC300 power station, while the three solar panels deliver 200W of charging capacity each.

The second deal from BLUETTI offers double the power to ward off any darkness the Halloween season throws your way.

This bundle comes with two AC300 power stations, capable of receiving up to eight B300 Battery Modules – four of which are already included. This delivers over 12,000Wh of energy in a modular package to suit your needs.

Contrary to bundle #1, this combo foregoes the solar panels for BLUETTI’s Fusion Box Pro, which allows you to connect two AC300s together and power high voltage devices such as a clothes dryer or air conditioner… or perhaps a Ghostbusters proton pack?

The third and final AC300 bundle from BLUETTI is the most monstrous of the Halloween deals. BLUETTI has essentially combined the two bundles above but also doubled the number of solar panels you receive.

So while the four B300 battery modules will deliver the 12,288Wh of continous energy to you, you also have access to 1,200 additional watts from solar panels.

At a usual MSRP over $15,000, BLUETTI’s latest deal will have you howling at the Moon with excitement. For their Halloween sale, the company has taken off $3,928, so snag this bundle before it ends for the price of $11,099.

While the AC300 and B300 are the newest products in BLUETTI’s lineup, there are plenty of other energy solutions available as part of the Halloween sale. Here are a couple.

BLUETTI’s EB55 is a compact 527Wh power station that packs a punch. At under 17 lbs, the EB55 is the perfect energy generator for camping and other energy on-the-go activities.

This power density stems from the EB55’s pure sine wave inverter, which boasts 700W (up to 1400W surge) with 4x110V AC outlets. It can power up to 13 devices simultaneously through multiple ports.

The EB55 utilizes ultra-stable and safe LiFePO4 battery chemistry, combined with a built-in battery management system for multiple layers of protection, wherever you are. This allows the EB55 to be charged and discharged 2500+ times before reaching 80% capacity.

The generator is able to receive up to 200 watts of solar input (panel sold separately) and 200 watts of AC power at the same time, helping the EB55 charge to 100% in only 2 hours.

Here are some other specs:

For Halloween, BLUETTI has released a special pumpkin orange tone of the EB55, which joins the previously available blue and grey options.

The EB55 Portable Power Station is currently available for $499, but as part of its Halloween deals, BLUETTI is offering special discounts when you bundle the solar panel(s). Check out the sales here.

The AC200MAX picks up where BLUETTI’s AC200P left off by delivering even more possibilities for portable power. Unlike the AC300, the AC200MAX comes with a standard built-in 2,048Wh LFP battery pack and can expand quite a bit from there.

Modularity shines with this version of the power station, and the AC200MAX can be connected to both B230 and B300 Battery Modules. In fact, by connecting two B300s, the AC200MAX can deliver a whopping 8,192Wh.

Like its sibling counterparts, the AC200MAX’s inner workings center upon a pure sine wave inverter boasting 2,200 watts (4,800 watts surge). Longevity is another term associated with this power station, as it can be charged and discharged 3500+ times before falling to 80% capacity.

To recharge, the AC200MAX is able to accept up to 900 watts of solar input and 500 watts of AC input at the same time, becoming fully replenished between 2-2.5 hours.

Another great feature showcasing the modular capabilities of this BLUETTI power station is the AC200MAX’s ability to connect to any solar array option that has a total open-circuit voltage (Voc) in the range of 10-145V/MAX.12A and MC4 connectors.

Here are other specs:

Catch these BLUETTI Halloween deals before they disappear

While these deals from BLUETTI are scary good, they’re only temporary. These Halloween deals are available globally and run from October 28 to November 4.

Check out BLUETTI’s website for all the latest deals and accessories.