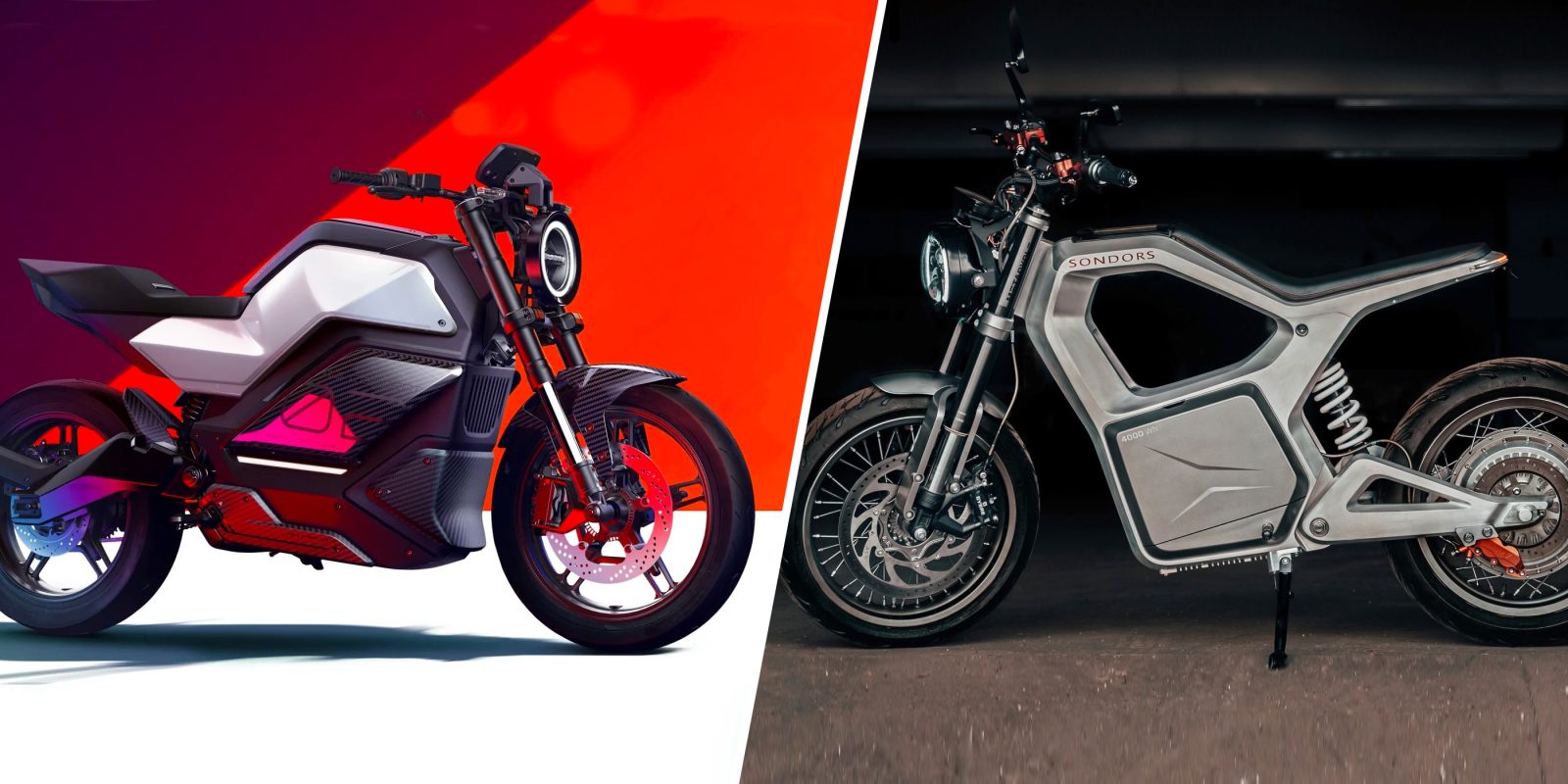 The SONDORS Metacycle and NIU RQi electric motorcycles are both racing to reshape the market by bringing highway-capable speeds down to commuter-level prices.

The Metacycle and the RQi electric motorcycles actually share a number of things in common.

They both promise speeds and ranges that run the gamut from highway riding to city cruising.

They both include removable batteries, a key feature that allows apartment dwellers to recharge even without street-level outlets.

And they both… don’t exist yet?

At least not in any commercial form, as both were promised to arrive by the end of 2021 and both are apparently behind schedule.

But considering the two companies have many years of experience delivering new electric two-wheeler models, both the SONDORS Metacycle and NIU RQi electric motorcycles are expected to show up on US roads sooner or later, even if they slightly miss their original target dates.

In anticipation of both bikes’ rollouts, let’s take a look at their specs, stats, and pricing to see how they compare.

NIU opted for a mid-mounted motor similar to most higher power electric motorcycles, while SONDORS went with a rear hubmotor as a way to reduce cost and complexity.

The NIU RQi was originally promised to carry a 30 kW (40 hp) motor, though NIU recently announced that a lower spec version of the motorcycle will debut first with just a 5 kW (6.7 hp) continuous-rated motor.

While the Metacycle appears like it will offer more power than the first version of the RQi, the heavier hub motor’s additional unsprung weight and its effect on the bike’s handling may give pause to some riders. Since we haven’t had the chance to test the bike yet though, we’ll refrain from making a final judgement on that front and let the motors’ power specs speak for themselves for the time being.

Again for the NIU RQi, we’ve got different specs for the eventual full power bike and the initial early version.

NIU initially promised us a top speed of 100 mph (161 km/h), but more recently confirmed that the first release of the bike would be limited to just 62 mph (100 km/h).

A source at NIU confirmed to Electrek that there will be a boost function on the first RQi model that will offer a quick sprint up to 110 km/h (68 mph).

That’s still a far cry from the 100 mph promise in the higher spec version that will likely excite most prospective new riders.

Both bikes would theoretically be highway capable, though the lower speed version of the RQi would definitely be limited to shorter jaunts where it would be confined to the slow lane.

Either way, the Metacycle and RQi are both being marketed more toward commuter-oriented riders where the majority of miles would be spent in city and suburban environments. The higher speeds allow the bikes to run with the big dogs briefly, but both air cooled bikes likely aren’t designed to spend long periods of time at red line speeds.

Once again, the RQi comes with two different numbers depending on which model we’re looking at.

While the original full spec bike promised a pair of removable batteries totaling 7 kWh capable of 80 miles (130 km) of range, the initial version’s two batteries will only add up to 5.2 kWh and a shorter range of 74 miles (119 km).

The good news is that NIU’s range rating is according to the World Motorcycle Test Cycle (WMTC), meaning that’s a fairly realistic range that riders can expect to duplicate.

The SONDORS Metacycle will come with a single removable 4 kWh battery. At nearly 50 lb (23 kg), the single battery will be quite heavy, but we’ve seen a demonstration showing that it should be fairly easy to remove.

SONDORS tells us that the bike will be capable of a max range of 80 miles (130 km), but hasn’t provided any range testing standard for that figure, meaning it is likely measured at a much lower speed of around 25 mph (40 km/h).

The SONDORS team also revealed in an interview with Electrek that they plan to offer a 3 kWh auxiliary battery as an option to fill that large hole in the frame, adding an additional nearly 75% range to the bike. The other two accessory options to fill that hole will be a Level 2 charger or a storage box.

The NIU RQi electric motorcycle was announced first, all the way back in January 2020. You know, back when COVID-19 didn’t even have a name yet because we all still thought it was a small problem on the other side of the world.

The original plan was for production to start in the second half of 2020, with NIU stating that the RQi “will be made available to consumers a few months later.”

No one needs a reminder of what happened since.

With the pandemic delays, NIU pushed that delivery date back to “the second half of 2021” for the Chinese model and early 2022 for the US and European models.

The SONDORS Metacycle was unveiled at the beginning of 2021 with a much shorter production schedule. The company originally stated that the Metacycle would be heading for production by the end of 2021, meaning less than a year from unveiling to deliveries.

That short time frame was further curtailed when SONDORS shared that production was running ahead of schedule and that first deliveries were being moved up to Q3 2021.

That time frame proved to be too optimistic when delays forced SONDORS to recently send out an email to customers pushing the delivery window back to the end of 2021. The email included wording that left the door open to potential further delays that could see first deliveries extended into 2022.

In other words, both companies are aiming for deliveries to begin this year, but it is quite possible that neither motorcycle actually rolls out in finished form until next year at the earliest.

Pricing is a bit hard to compare, as NIU hasn’t announced a final figure for either the Chinese market or US market.

The Chinese market RQi has been estimated to cost around 35,000 RMB (approximately $5,400). Based on the markup for NIU’s largest electric scooters, a similar pricing structure would put the RQi at around $8,000 in the US.

SONDORS has already pre-sold Metacycles for $5,000. Reading the fine print shows that the final price will be higher, as “tax, shipping, and white glove delivery fees are not included in this pricing and will be charged separately.”

As you can see, there are still too many things at play to make a real call here. The SONDORS Metacycle certainly looks more affordable, but we don’t have final pricing on the NIU RQi yet.

The RQi’s 100 mph top speed and 30 kW motor should easily best the Metacycle’s 80 mph and 14.5 kW specs, except that higher performance version of the RQi appears to be a long way out. The first lower-spec version won’t match the Metacycle’s performance specs, assuming the Metacycle lives up to its promises.

And the real kicker is that both motorcycles aren’t even here yet due to overrunning their production timeline estimates.

So while both look like promising options, we’ll have to wait a bit longer until we can see and test the bikes in the flesh and make a true call.

Until then, let’s hear what you think about the two competitors. Which one could you see yourself throwing a leg over? Let us know in the comments section below.