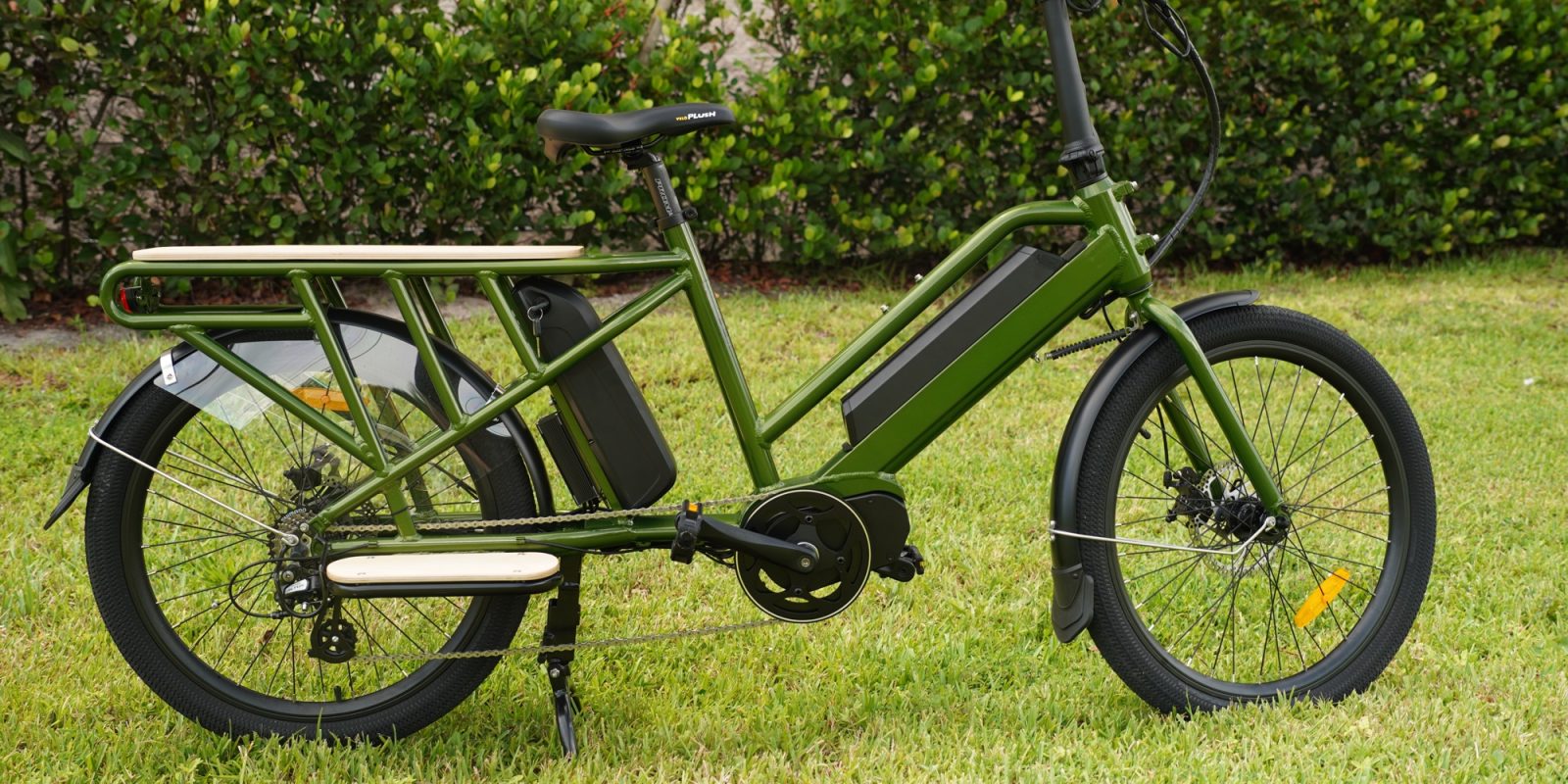 Electric cargo bikes are one of the most fascinating e-bike categories to me because of just how much creativity exists in the industry and how much utility the e-bikes offer. The EUNORAU G20 e-bike embraces the prototypical longtail cargo e-bike style yet adds new upgrades to the 2021 model, including a second battery for even longer range.

While there are plenty of affordable longtail cargo e-bikes out there, most use hub motors to help bring that price down.

Hub motors are great options for electric bikes to reduce the cost with simple, tried-and-true motors. But for those that are prepared to pay a bit of a premium, mid-drive motors offers some unique upgrades over hub motors.

The problem is that mid-drive motors typically drive the price of e-bikes much higher – but not in the EUNORAU G20. This cargo e-bike manages to slip in a mid-drive motor while stiff offering hub motor prices.

Make sure you take a look at my test ride video of the EUNORAU G20 below, then keep scrolling for my complete review.

The EUNORAU G20 is able to offer a mid-drive motor at lower prices than most because they turned to an Asian motor OEM known as DAPU. It isn’t as well known as the usual suspects like Bosch or Brose, but I’ve found the motor to work quite well in my own testing. And the fact that it doesn’t come with a German price tag is a major advantage. Don’t get me wrong, I love a nice Tern e-bike with a powerful Bosch motor. But I don’t have $5,000 or more burning a hole in my pocket right now, so sign me up for a DAPU motor, please!

Another cool advantage of going with an Asian mid-drive motor is that you get a throttle, since they aren’t limited to pedal-assist-only operation like the European motor manufacturers.

There’s something almost trippy about throttle-enabled mid-drives because you can look down while using throttle to see your chainring spin while your feet are staying still, but the sheer fun of it helps you get used to it pretty quickly.

I’m a huge proponent of throttles on cargo electric bikes. I accept that many people don’t want a throttle because they treat their e-bike as a combination fitness/transport solution. That’s great. More power to you. But why not have the option? Even when I’m pedaling the G20, having that throttle to get rolling for the first few pedal turns is a big benefit.

The throttle is also super helpful for those times that you forget to downshift before coming to a stop. Getting rolling in high gear is a doozy on any bike, especially a loaded-down cargo e-bike. So I think the option of choosing throttle or pedal assist is a big win here.

While the G20 has great “go,” its “stop” could use some work. The brake levers and calipers themselves are fine for mechanical brakes, but the brake pads feel like two pieces of wood clamping down on the steel disc rotors. EUNORAU could have spent a few extra bucks to put better pads in the brake calipers, that’s for sure. At least it’s an easy swap, and brake pads are a consumable part, meaning you’ll be changing them anyway. But I’d recommend changing them sooner rather than later and putting in some better pads than the stock ones they provide.

When it comes to cargo e-bikes, a double kickstand is a must, and the G20 delivers there with a Y kickstand. The Y shape is much sturdier and helps keep the bike steady with a heavy load when parked. The only problem with the G20’s kickstand is that the pivot is mounted so freaking low, leaving the bulk of it hanging pretty close to the ground. I smacked it several times when hopping curbs, to the point where it loosened up and I had to retighten it after the first week or so of riding. I started getting better about looking for ramps, but let’s be honest – sometimes city riding requires getting creative. You don’t always have a nice smooth transition between surfaces and the occasional curb must be hopped.

If I have to ding the G20 on its low-mounted kickstand, then the bike earns those points right back with the display. The G20 uses an easy to read LED display with a dark background and bright numerical segments that you can read in just about any setting. You never have to worry about looking down to check your speed or battery and being unable to read the screen due to the glaring sun.

Speaking of that battery, you won’t have to check it too often if you go with the updated dual battery option because the two packs just last so dang long. A second benefit of the dual battery model is that using the throttle doesn’t ding you as much in the range department. Throttle riding still drains battery quicker than pedal-assist, but the second battery means you don’t feel the consequences so quickly.

The single 550 Wh battery version of the bike (we reviewed the previous edition of that model in the past) is likely to get you around 20-25 miles (32-40 km) on throttle only. You might get perhaps twice that much if you’re good about using medium-level pedal assist. But with two batteries, you can more than double both ranges (since that second battery is actually higher capacity at 672 Wh).

The bike is decently fast at 25 mph (40 km/h), which feels like plenty when you’re carrying cargo or kids in the back. The G20 works equally well for both, but I recommend adding some deck pads if you want to bring kids back there. The wooden platform looks great but isn’t exactly kind on the rear end.

Carrying heavy cargo or boxes piled tall can put the weight up a bit high, but the 24-inch tires at least lower the weight somewhat compared to cargo e-bikes with 26-inch wheels. Other electric cargo bikes like the RadWagon recently made the shift from 26-inch wheels to smaller diameter alternatives, and it really makes a big difference when you’ve got a bunch of cargo back there.

For the most part I’ve been quite happy with the EUNORAU G20. It’s a fully functional cargo e-bike that even packs in some neat features like the folding handlebar stem that would allow you to more easily slide it in the back of a van or SUV.

The bike even provides the benefits and most of the performance of a typical mid-drive long tail cargo e-bike but at around half the price – just a mere $2,099. If you go with the dual battery model, you’ll have to fork over a bit more at $2,539 – but that’s still a song compared to a nearly $6,000 dual-battery Tern GSD.

But then again, the quality certainly doesn’t compare to bikes that are twice the price. Not only are the components lower quality, such as the mechanical disc brakes or the off-brand motor. Plus there are obvious shortcomings with the assembly, such as one of the bolts on the wooden running board being not tightened down all the way and stripped out. It’s apparent that the worker on the assembly line couldn’t get the bolt flush, stripped it out trying to drive it deeper, then shrugged and moved on to the next bolt. It doesn’t affect the functionality at all and is just an aesthetic issue, but it’s an example of the difference in fit and finish you’ll find between the budget-level and more expensive e-bikes.

All told, I’d say the G20 is a great option for someone that wants a mid-drive cargo e-bike but doesn’t want to pay the high prices that such bikes normally carry. The mid-drive is a huge advantage with hills and for anyone who really wants to pedal the bike, but the price is still much closer to hub motor e-bikes. It strikes a great balance for the budget-minded shopper, and it definitely gets a recommendation from me, even if it isn’t as nice as the bikes it imitates.