Electrek review: How we all rode Unu electric scooters and got around like Europeans 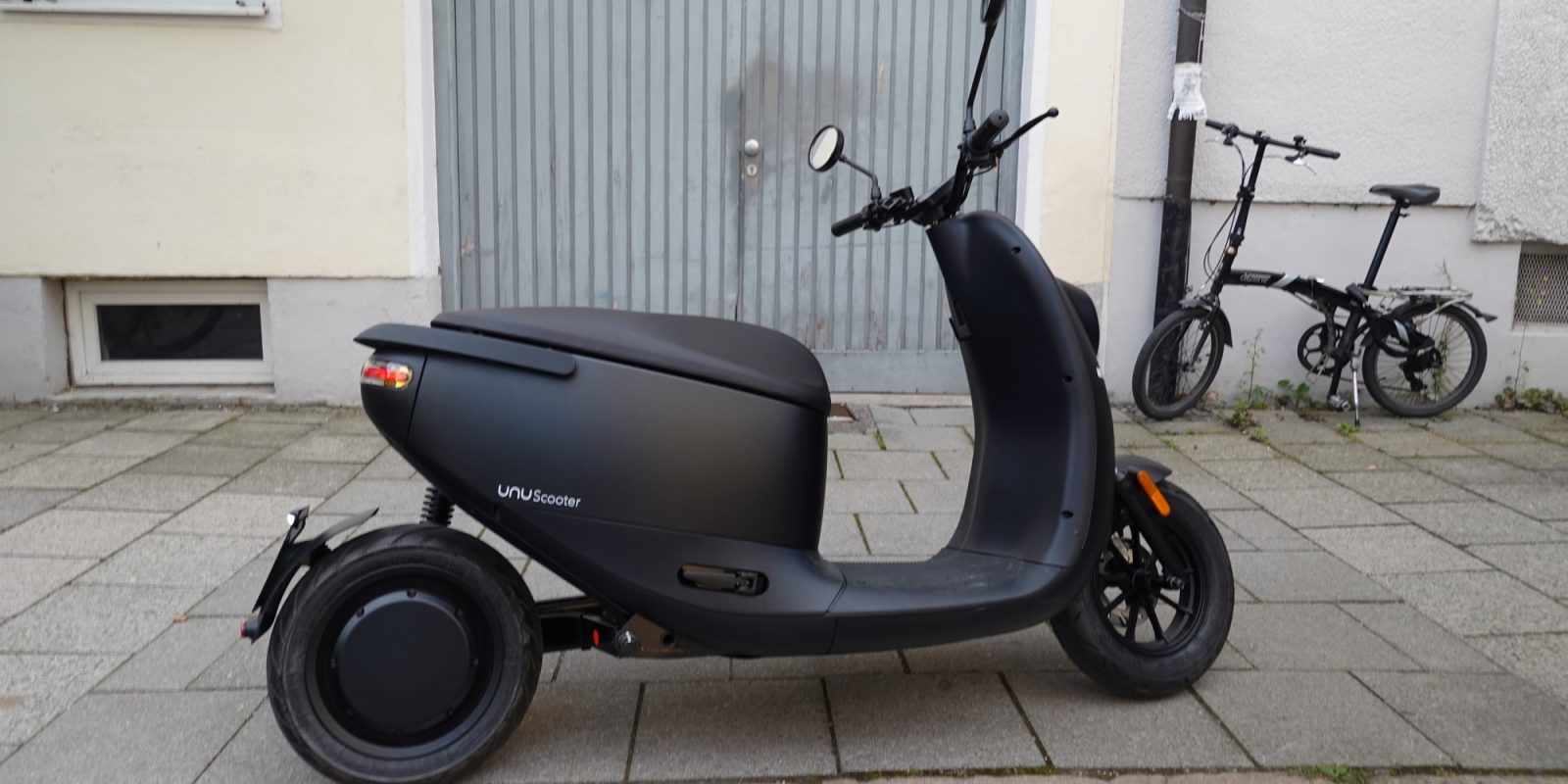 While staying in Munich for a week during the IAA Mobility show, Electrek’s Fred Lambert, Seth Weintraub, and I each got the chance to test out Unu’s electric scooters as a way to navigate the city. Unu was kind enough to loan the three of us our very own 4 kW matte black Unu scooters. Together we constituted Electrek‘s first and only short-lived, mild-mannered biker gang as we toured the city in formation on our electric steeds.

Europe has no shortage of electric scooters, with high-end brands like those from Piaggio’s Vespa and lower-cost models from any number of weekly entries in the imported Asian scooter space.

But Unu has carved out its niche as the cute, friendly, and affordably priced L1e scooter that doesn’t ding the wallet as much as the fanciest models.

As an L1e-class scooter, riders only need a valid driver’s license instead of an extra motorcycle or moped endorsement, though you’re limited to the scooter’s 50-ish km/h (30 mph) top speed.

I’ve long been a proponent of getting that motorcycle endorsement anyways to pick up some better riding skills, but the moderate power and simple-to-use scooters like the Unu make it easy for just about anyone to hop on a scooter relatively safely.

The three of us quickly took to the scooters as we spent several days touring the city Unu-style. Check out our riding video below to see how we experienced the scooters. Then don’t forget to keep reading below for the rest of our review.

Rolling pretty on our e-scooters

Unu has a few power levels available, but we cranked the volume to 11 with the maxed-out 4 kW models. To be fair, those 4 kW aren’t overly powerful, but they’re plenty for the city and gave us a nice head start on cars at red lights. You can save a few bucks by going with the 3 kW scooters, but I thoroughly enjoyed the 4 kW model since it closely matched what I have on my own personal electric scooter back home.

The scooter has comfortable throttle ramping where you get significant power that is responsive but not overwhelming. Some scooters dump all the power at once, while others seem to lay it on quite slowly, ramping up over several seconds.

Unu has struck a nice Goldilocks balance where the throttle response is powerful but not jerky. That’s a fine line and the company seems to have walked it nicely.

The extra power is also helpful when you’re carrying a passenger, which Fred tested several times with his girlfriend. The large seat on the Unu means there’s plenty of space for a single rider or ample space for two. It also creates a longer and thus larger underseat storage area. There’s a total of 43 liters of space, though some of that is taken up by the single or double batteries. You can still fit two 3/4 helmets under the seat, though only one full-face helmet.

Unu uses an interesting system where even if you have two batteries, only one is actually powering the scooter. When that battery runs down, you can pop up the seat and swap the two battery’s positions to start draining the second battery. Even though the second battery isn’t connected electrically, the scooter uses near field communication (NFC) to wirelessly measure the capacity of the second battery and display it on the screen. NFC is also used to start the scooter and turn it off. A sleek black keycard tapped to the screen replaces a physical key and helps reduce keychain clutter – an affliction I suffer from but am learning to live with.

Speaking of those batteries, they’re fairly high capacity at 1.68 kWh each. Each is rated for 50 km (31 miles) of range, though we found that real-world range when riding fast is closer to 30-35 km (20-22 miles), especially if you’re a larger rider or carry a passenger. So two batteries gives you around 70 km or 40 miles of fast riding range, though you can go further if you spend more time in slow-moving traffic.

And just like all electric vehicles, the fuel ends up being quite cheap compared to a gas-powered alternative. A full charge of two batteries is around US $0.40 – not bad for 40 miles of fast range or 50+ miles of range at more reasonable speeds. With a starting price of €3,299, the reasonably priced Unu’s definitely save on fuel cost, though I might have enjoyed a bit more range out of those batteries if possible.

I also want to take a quick second and talk about the chargers. That’s an often overlooked piece of gear, but Unu has the nicest chargers I’ve ever seen for an electric scooter.

They’re solid state without any fan, meaning they don’t sound like a small helicopter is preparing for take off in your office or living room.

They also look pretty slick, like a futuristic docking station. And the batteries have this cool pulsing light on top that gives you an idea of how charged they are at a quick glance. The longer the light bar is illuminated on top, the closer they are to being charged.

Because the chargers don’t have a fan and also because the batteries are fairly high capacity, the charge does take a while to complete. When totally drained, charging takes around seven hours. That means an overnight charge is pretty common. A higher power charger would solve that, but then you’d be back at the cooling fan conundrum. As it is, with two batteries we never had an issue and just charged at night or rode with one battery if the other was on the charger.

While riding, the scooter is quite comfortable thanks to the formed seat with leg dimples and the suspension. The single-sided rear swingarm has a single monoshock that does its job nicely. It’s not Ohlins suspension, but it still absorbs the pot holes and other urban obstacles fairly well for a moderately priced scooter.

Another aspect I really liked was the lighting. Halo headlights are nothing new, but Unu does a great job of incorporating an attractive and bright headlight as well as a neat-looking rear LED light strip for the tail light.

The cherry on top though is the battery lighting. When you open the underseat compartment, the batteries light up on top proportionally to their charge. It looks awesome and also shines some light into your storage compartment so you can see what you’re doing at night.

Unu’s screen is another interest aspect. I must say that when the company first announced the new, cuter Unu scooter with its rounded edges and bubbly shape, I was sad to see the classic, retro-styled analog dash was gone.

As far as I know, the Unu Classic that came before this scooter had the only analog speedometer and battery meter on the market, and I’m a sucker for old-school needle gauges.

But giving up the analog display in favor of a digital one is a compromise with some serious upsides. For one, you get a more accurate battery display with a true percentage meter. One hundred gradations is a much more accurate way to measure battery percentage. There’s also a lot more freedom to implement new features. Unu’s CEO Pascal Leonard Blum explained to us that new features were in the works, such as the possibility for GPS-based directions that display on the screen. Try doing that with needle gauges!

So while I miss some of the retro charm of the former Unu Classic scooter, the new capabilities of the updated scooter are more than worth the upgrade.

Ultimately we found the Unu scooters to be a fast and fun way to navigate the city, and I personally found them to be the most efficient as well. As much as I love electric bicycles, Europe’s 25 km/h speed limit means they just aren’t as fast commuter options as they can be in the US. Depending on the city and its unique traffic, bike lanes sometimes help e-bikes zip ahead for short periods. But as soon as the lane starts moving, the Unu’s nearly 50 km/h (30 mph) top speed helps it overtake any e-bikers that might have gotten a jump start.

And for anyone who decides to lane split (as it turns out is technically illegal in Munich) will discover that electric scooters offer benefits of motorcycles and bicycles when they wiggle their way through stop-and-go traffic to arrive much sooner than either e-bikes or cars.

Sure, there are downsides to scooter travel. We fortunately had great weather, but I’ll admit that scooting in the rain is less than fun. But a decent rain coat and pants can make all-weather riding nearly as easy. As an alternative to cars and trains, Unu’s electric scooters gave us the freedom we were looking for to quickly and conveniently navigate the city, park pretty much wherever we wanted, and spend pennies on fuel.

Unu’s scooters are attractive, well-designed, and easy to use. And most of all, they’re simply fun to ride! With so many scooters to choose from, I can confidently say that Unu has a great product on their hands. And after hearing some of the improvements they intend to push out to their riders, I can tell the scooters will only keep getting better.