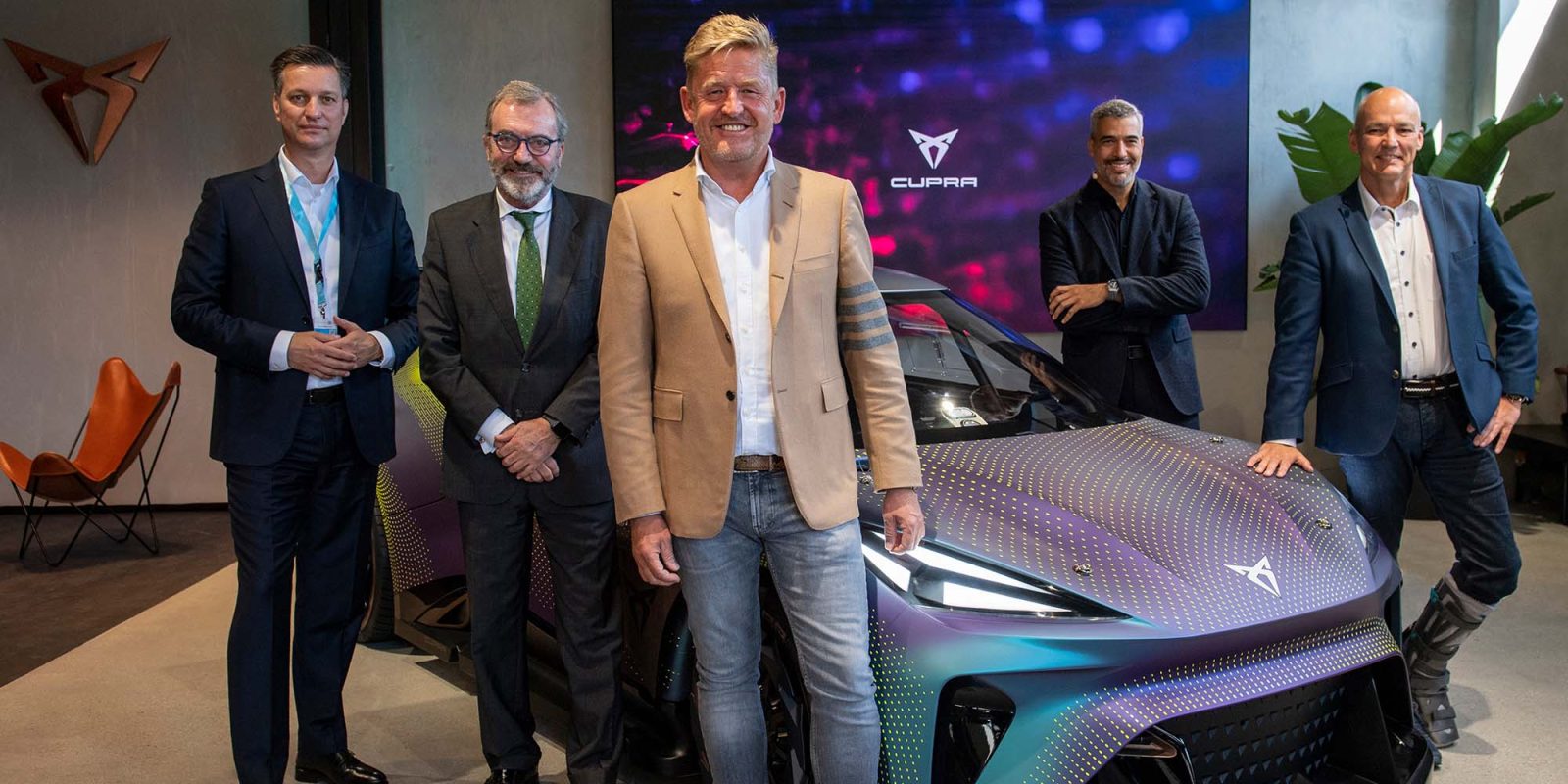 During IAA Mobility in Munich this year, Spanish automaker Cupra publicly shared its brand’s vision for an all-electric future, outlining its pipeline of upcoming EVs as evidence of its “ambition” to reach its goal by 2030.

Cupra is short for SEAT Cupra, S.A.U., a high-performance subsidiary of Spanish automaker SEAT. SEAT has been wholly owned by Volkswagen Group since the mid-80s, although the Cupra brand was founded in 2018.

With a specific focus on rallying and touring car racing, Cupra has previously developed multiple ICE vehicles. Since then, however, Cupra has quickly adapted to the electric vehicle market. This began with the Leon e-racer 100% electric touring car, followed by the upcoming Cupra Born.

The Cupra Born has entered production and will debut later this year. It will also be joined by the recently announced Cupra Tavascan, set to arrive in 2024.

Last week, Cupra unveiled an electric hatchback concept called the UrbanRebel, continually referencing a 2025 production version. As we previously reported, this could be a hint to Volkswagen’s upcoming ID.2 hatchback on the same MEB Platform.

Following the UrbanRebel announcement, Cupra has now used its spotlight at IAA Mobility to share plans for the brand’s electric future.

Cupra shares it has ‘ambitions’ to be fully-electric by 2030

In a strategically worded press release, Cupra announced its plans to be an all-electric brand by 2030. The release coincides with the automaker’s announcement during IAA Mobility 2021 in Munich this week.

After the opening of the annual event, Cupra explained how it has delivered over 100,000 vehicles since its launch and has successfully established a presence in European markets, expanding overseas to countries like Mexico, Israel, and Turkey.

Also during the event, Cupra CEO Wayne Griffiths spoke about the brand’s goals to deliver zero-emission vehicles only by 2030:

We have the ambition to become a fully electric brand by 2030. We are launching the CUPRA Born this year, the CUPRA Tavascan will arrive in 2024 and the CUPRA UrbanRebel will challenge the conventions of the electric era with its emotional interpretation of the company’s urban electric car, due to arrive to the market in 2025. We will be launching it first as a CUPRA, as it is going to be the brand initially focusing on electrification while SEAT will focus on hybridization and high efficiency ICE. We will monitor closely the acceptance of electric cars by the customers and the roll-out of infrastructure in Europe.

In addition to its upcoming EVs, Cupra’s CEO focused much on its City Garage retail spaces to host events and exhibitions for the Cupra brand. The company is now celebrating a new location in Munich, with several more on the way. After sharing plans for City Garages in Mexico City and Hamburg, Griffiths once again elaborated:

Tomorrow, we will open a new City Garage in Milan, and very soon we will be in Madrid, Rotterdam, Lisbon and Berlin. We are also planning to open a City Garage in Sydney in 2022. Our ambition is to become a global brand; therefore, we will build a strong network worldwide and train more than 1,200 CUPRA Masters by the end of 2022.

The next EV to debut will be the Cupra Born this coming November. It is currently entering production at the company’s Zwickau factory in Germany.

While this is, by no means, the most ambitious timeline for an all-electric goal, at least Cupra is trying. Their 2030 goal should be recognized and supported, although their announcement of said plan… not so much.

It’s not that the announcement lacked hope and excitement for all-electric future at Cupra. It’s simply that the wording of such “ambitions” remained rather broad. Cupra is on the cusp of delivering its first genuine electric vehicle this fall, a major milestone for any automaker.

Additionally, with one more in its pipeline for 2024 and another concept that will be a production EV for someone in 2025, Cupra is certainly making electric moves. But is it enough?

The small but growing brand has generated all of its success off ICE vehicles so far, although Cupra claims to be the electric-focused brand under SEAT, which will continue to produce hybrids and ICE vehicles with no end in sight?

This is where parent company Volkswagen Group needs to step in and nudge its sub-brands to fall in line, especially if they are in fact using the marque to develop their upcoming ID.2 EV.

Yes, Cupra’s upcoming lineup for the next four years includes EVs, but there is zero mention of what the company is planning to do with its four current ICE models, the one’s generating all their income at the moment.

While I welcome Cupra’s “ambitions” to go fully electric by 2030, I’d be a lot more impressed if they actually acknowledged an end to ICE production in any timeframe.

It can “monitor the acceptance of electric vehicles” all it wants, but Cupra is going to have to be more ambitious than that to catch the wave of mass EV adoption inevitably due to arrive in the next decade.