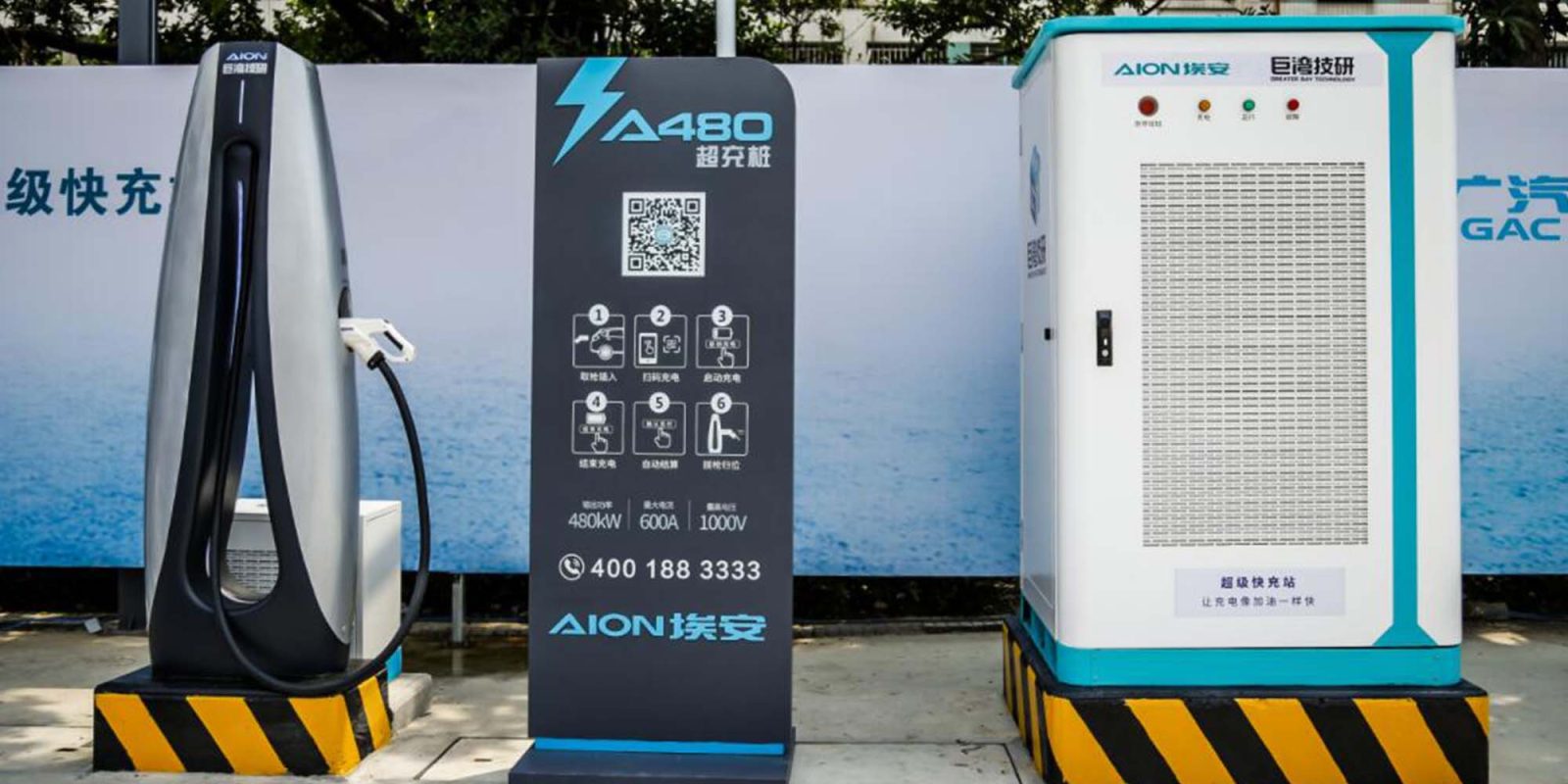 Chinese EV manufacturer GAC Aion has officially debuted its A480 fast charger, capable of charging its upcoming Aion V SUV from 30-80% in under five minutes. While still impressive, the fast charger’s top charging power of 480 kW sits well below rumors last week speculating this debut would showcase a 600 kW charger.

Aion exists in China as a sub-brand of Guangzhou Automobile Corporation (GAC) Group, focused specifically on electric vehicles. Currently, the automaker sells four EVs in addition to its upcoming Aion V SUV, which will feature a graphene-based battery to support its new fast chargers.

Originally, GAC was promising the AIon V would deliver 1,000 km (621 miles) of range. However, its website now shows 500 and 600 km NEDC range for the upcoming SUV.

Last month, GAC Aion teased its fast-charging charging technology at its most recent Technology Day. On the 3C charge multiplier, the GAC Aion EV charged 0-80% in 16 minutes and 30-80% in 10 minutes.

On 6C, GAC Aion’s fast charger achieved charging times of eight minutes for 0-80% percent and less than five minutes to charge from 30-80%.

Following a new report last week, GAC Aion was rumored to have an even more powerful fast charger to share.

However, now that the GAC Aion fast charger has made its official debut, we have learned that 480 kW is the current max. Still, an impressive fleet nonetheless.

A recent report from CnEVPost covered GAC Aion’s official debut of its A480 fast charger in China. The A480 name is derived from “Aion” and the charger’s 480 kW power.

While the debut did not live up to the previously rumored 600 kW fast charger, GAC Aion’s A480 charger still delivers industry leading charge speeds.

During the demonstration, GAC Aion said its graphene-based battery can charged up to 880 volts, nearly double the operating voltage of most EV batteries today. Additionally, the battery saw a max charge current of 560 amps, delivering a charging power up to 480 kW.

At 6C charging multiplier, GAC Aion claims its fast charger can add 200 km (124 miles) of range in five minutes of charging and charge the EV battery from 0-80% in eight minutes.

Previously, the automaker reported its charger could add 125 km (78 miles) of range in five minutes, an improvement of 75 km since Electrek‘s last report.

According to GAC Aion, the A480 charger has already passed 12 standards, including over-voltage protection, over-current protection, and over-temperature protection, ensuring safe charging.

Additionally, Aion has stated that its battery can charge from 30-80% in 4 minutes 50 seconds under the A480’s 6C speeds. This is a 10-second improvement from the previously promised time of five minutes.

GAC Aion’s propriety batteries will require these exclusive A480 chargers to achieve these advertised speeds. The automaker has already implemented a fast charger station in Guangzhou and plans to build 2,000 more by 2025.

We were skeptical at the rumors last week about a 600 kW fast charger, but intrigued nonetheless. We left it to this week to see what the Chinese automaker would actually showcase, and while it was significantly less powerful than originally speculated, 480 kW is still quite impressive.

Even at 480 kW of charging power, Aion’s A480 sits well above other fast chargers, and 230 kW above current Tesla Superchargers.

It’s interesting that the automaker has plans for over 2,000 charging stations in the next four years too. Especially since the Aion V appears to be the only upcoming EV capable of reaching these charge speeds, and it won’t be out until September earliest.

The next step will be to wait for the Aion V SUV to officially deliver in China and see what sort of specs the EV can achieve.