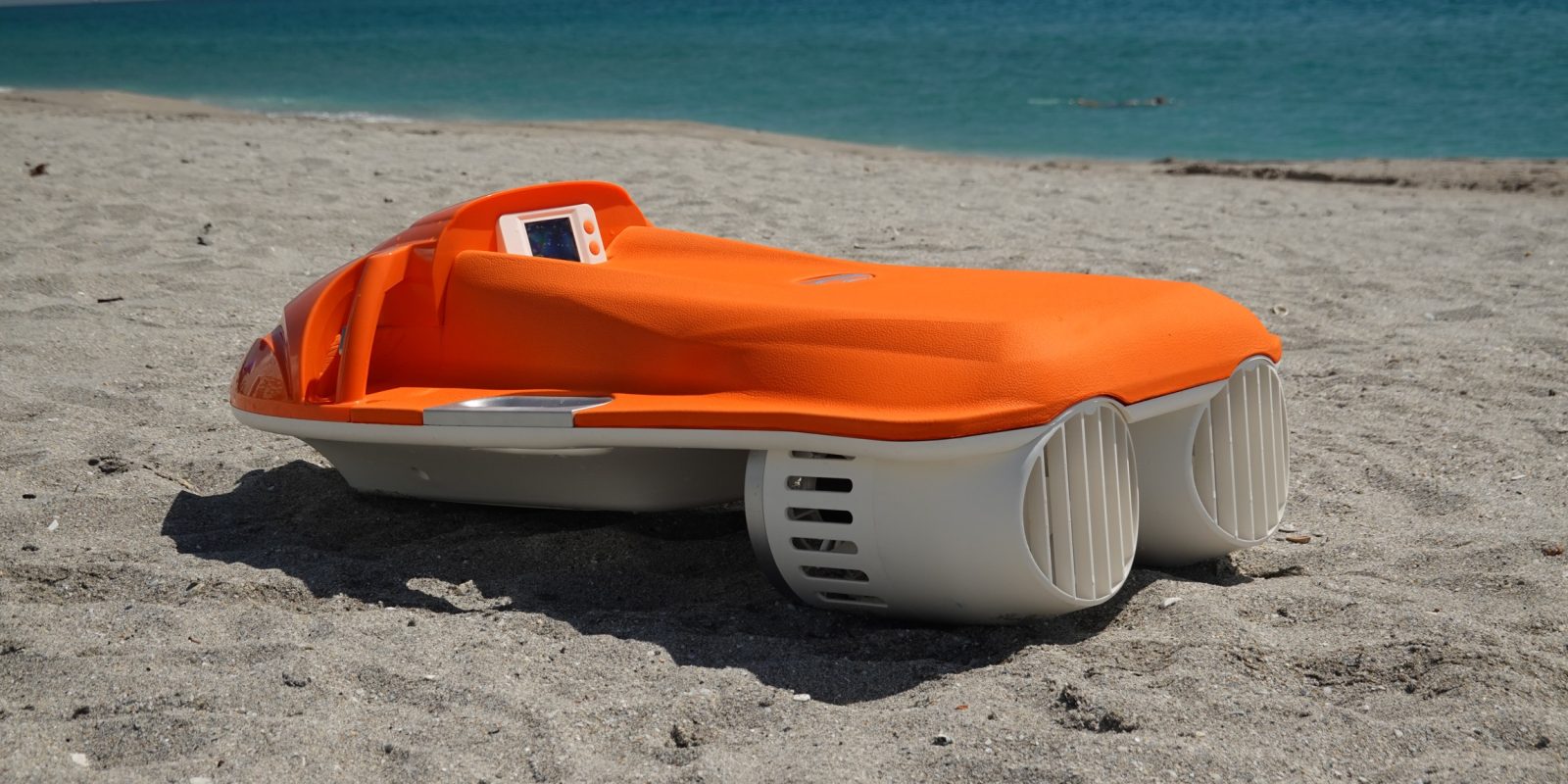 Bodyboarding the old-fashioned way is plenty of fun, but what if the sea is too calm (or you’re in a pool or lake)? Then an electric bodyboard can give you the same thrill no matter what type of water you’re in. I just had the chance to test out Firduo’s electric bodyboard, and I haven’t stopped smiling since!

The Firduo electric bodyboard is unlike anything I’ve ever tried before.

I’ve ridden electric surfboards and electric hydrofoil boards, but both of those require something of a learning curve to stay up.

They also require a wallet thick enough to have you sitting lopsided.

The Firduo electric bodyboard here is both a tiny fraction of the price of an electric surfboard and also much easier to use. There’s basically nothing to learn and no balance requirement – you just squeeze the throttle and hold on!

It’s really a blast to ride – check it out in my video review below, then keep scrolling for my in-depth review.

What makes this thing tick?

I’m not sure quite how to describe the Firduo electric bodyboard. When I think of a bodyboard, I think of those cheap foam things that I steal from my nephews when we all go to the beach.

But the Firduo is nothing like that. It looks more like a scaled-down jet ski. It’s basically a highly buoyant little electric towboat with a pair of handles to hang on to. There’s a foam surface behind the bow so your skin feels nice when you’re laying on it and a little LCD screen to see your power level, battery percentage, motor temperature, and other key data.

A pair of buttons by your right thumb lets you select how powerful the motors work and a trigger for your left index finger engages that power.

Two propellors located under the Firduo are connected to a pair of 2 kW motors and a single waterproof electronic speed controller. With both motors turning at full power, the little vessel pulls a max of 4,000 watts of power, or around 5.3 horsepower. That results in a max of 340N of thrust (76 lbf or 34.6 kgf).

At full power, it can pull an average-size rider at around 5-6 mph (4.3-5.2 knots or 8-10 km/h). That doesn’t sound like much, but it feels pretty darn fast when you’re being dragged along the surface of the water.

The coolest part though is that you aren’t limited to just the surface of the water. You can also dive, albeit not easily. The entire thing is IP68 rated and can operate at depths of up to 30 meters (100 feet). The only problem is the Firduo is so ridiculously buoyant that its hard to make it dive. You have to push the nose down and then use your upper body strength to keep it pointed down until it starts diving.

Once you get a foot or two under the surface it becomes easy because it just goes wherever you point it, but you do need to keep a slightly downward direction to counteract the positive buoyancy.

It’s definitely not meant to be a scuba-diving scooter, and the extreme buoyancy is actually really great for safety since if you get tired you could just lay on the thing and float effortlessly all day. They make a point of writing “THIS IS NOT A LIFESAVING DEVICE” in about a dozen places, though in a pinch I’d LOVE to have one of these tossed to me. Just don’t hit me in the head with it (it weighs 15.5 kg or 34 lb).

Of course the fact that they specifically stated that it’s not a lifesaving device made me want to live out my ultimate Baywatch fantasy with it – check out my video review at the top of this article to see me pull of my best David Hasselhoff.

When it comes to riding, I’ve found there are two basic positions and they really impact the ride. You can either have your arms fully extended and rest your chest on the board so you’re basically getting dragged behind the Firduo, or you can bend your arms and bring your face right up behind the bow so your torso is mostly on the board.

The arms extended position is somewhat easier, though it seems to drain the battery quicker as more of your non-hydrodynamic body is dangling in the water. When you choke up on the device and ride more on top of it, the battery seems to last longer and it feels like you might even go faster. It also makes it easier to turn since you can really lean into the turns and carve more like a speed boat. The downside is you’re also more out of the water and getting less of that splishy-splashy goodness.

When you’re underwater, the arms extended method seems to be easier and less tiring, though it is way harder to turn underwater with arms extended. Pulling the Firduo into your chest makes underwater turns much easier.

One other cool feature I haven’t touched on yet is the GoPro mount on the bow. I added an extender arm and it allowed me to film myself when I put the camera on backwards, or you can just put it on forwards and film the things ahead of you.

As much fun as the Firduo electric bodyboard is, there are two things I’ll complain about. The first is the battery life. They claim 60-120 minutes of run time, but I never saw close to that. I could get maybe 25-30 minutes of battery, though I only used the max power mode. The lower power modes are fine, and in fact that’s what I put the Firduo in when I let my young nephews try it. Based on the size of their smiles, it’s fun even in low power mode. But when you’re ripping in full power, you definitely won’t see one to two hours of use.

The battery is removable, so you could easily pick up a spare battery or two to swap in. A waterproof connector makes it easy to pop open the battery door and pull out the battery, even in a wet environment. Though that also leads me to my next complaint: weight.

The Firduo isn’t necessarily that heavy by itself. But the battery door has louvers in it that act like weep holes to drain water. They also do the reverse when the device is in the water – they fill up the battery compartment with water. That’s not an electrical issue thanks to the waterproof connectors, but it does add another roughly 10-20 lb (4-8 kg) of water that you’ll instantly feel when you pick the Firduo up after exiting the water. It takes about a minute for that water to drain out completely, so you’ve got an extra heavy bodyboard to farmer’s carry back to your towel on the beach until the water finally drains out.

All told though, those complaints are minor compared to how much fun this thing is. I love that I was able to take it everywhere, from neighborhood pools to the wide open ocean. It feels well built and like it should last for many years (though a good hosing off after any saltwater use is a good idea to extend its lifetime). And it’s not even as expensive as I feared it would be, with a current price of $1,900.

Yeah, that’s definitely not cheap. But I’ve also never ridden electric surfboards and e-foilboards that cost less than five figures. So everything is relative when it comes to electric water sports!